The Southern Folklife Collection is an archival resource dedicated to collecting, preserving and disseminating traditional and vernacular music, art, and culture related to the American South. We do this to advance the study and public recognition of these art forms, and support the educational, research and service missions of the University of North Carolina at Chapel Hill.

Established in 1940, the Curriculum in Folklore at UNC was one of the first graduate programs of its kind in the country. The early faculty included Ralph Steele Boggs, Arthur Palmer Hudson, and Guy B. Johnson, all of whom donated materials that were ultimately placed in the SFC. In 1968, faculty members of the Curriculum in Folklore established the UNC Folklore Archives. The John Edwards Memorial Foundation was formed in California in 1962 as an archive and research center named for a young Australian record collector. Following Edwards’s untimely death in 1960, his remarkable collection of American country music records, along with a wealth of correspondence and other research materials, was strengthened by additions from his American friends and colleagues, including Eugene Earle, Archie Green, D. K. Wilgus, Ken Griffis, Ed Kahn, and Norm Cohen. In 1983, UNC purchased the John Edwards Memorial Collection, and, in the fall of 1986, the UNC Folklore Archives and the JEMC were combined to form the Southern Folklife Collection. The SFC officially opened for research during the Sounds of the South conference at UNC in April 1989.

The Southern Folklife Collection is one of the nation’s foremost archival resources for the study of American folk music and popular culture. SFC holdings extensively document all forms of southern musical and oral traditions across the entire spectrum of individual and community expressive arts, as well as mainstream media production. 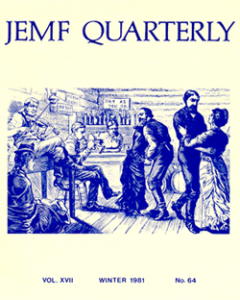 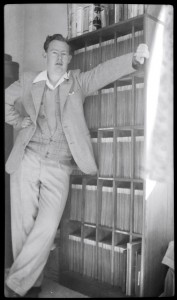 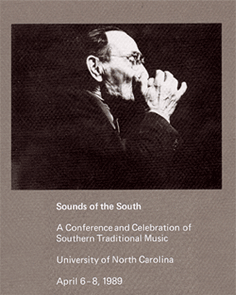 Sounds of the South Program. April 1989.