A History of the Raleigh Collection at UNC-Chapel Hill 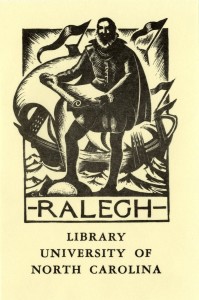 The development of a major collection of Raleighana at Chapel Hill began in 1940, when the Roanoke Colony Memorial Association donated to the Library $1,479.12 and five shares in the Carolina Insurance Company. The Association, having already transferred its Fort Raleigh property on Roanoke Island to the North Carolina Historical Commission, gave its other assets to the University of North Carolina at Chapel Hill “for the purchase and preservation of books, pamphlets, and manuscripts by or relating to Sir Walter Raleigh, directing that, in so far as practical, preference be given to such material dealing with the Lost Colony, on Roanoke Island, North Carolina, and its members and with prior expeditions sent by Raleigh to what is now North Carolina.”

Upon receipt of this special funding, Mary L. Thornton, curator of the North Carolina Collection, prepared a desiderata list of eighty-five titles for distribution to book dealers and friends of the Library. As word spread of her interest in Raleigh, various dealers in the United States and England began offering her titles, and she began ordering rare volumes that today would be priced far beyond the Library’s means. Included among titles acquired at this time were Raleigh’s Tubus Historicus, London, 1636; The Arraignment and Conviction of Sr. Walter Rawleigh…,London, 1648; Sir Walter Raleigh’s Sceptick…,London, 1651; and The Life of the Valiant and Learned Sir Walter Raleigh, Knight, With His Tryal at Winchester, attributed to John Shirley, London, 1677. During the 1940s, various members of the former Roanoke Colony Memorial Association and their friends also personally contributed books. One individual, for example, presented seventeen scarce volumes, and another located and purchased titles for the Raleigh Collection while traveling in England. Among the latter’s donations was a copy of the 1614 edition of Raleigh’s The History of the World.

The Library, too, took great pride in its new Raleighana holdings. In early 1943, it commissioned noted woodcut illustrator Clare Leighton to design a special Raleigh bookplate. The result was, in the words of then librarian Charles E. Rush, a “design brave, bold and stunning, just as was Raleigh.” This bookplate, with Raleigh depicted before a background of sea, ship, and waving banners, is placed in each item in the collection.

In the years since the 1940s, the Raleigh Collection has continued to grow, with all acquisitions being purchased with trust funds or received as gifts. New biographies of Raleigh, academic dissertations about him, and literary criticism of his writings are eagerly sought. Staff also seek works of fiction in which Raleigh is represented.  Other acquisitions relate specifically to Raleigh’s Roanoke Island colonies. Studies of English exploration of North America during the sixteenth and early seventeenth centuries are also acquired, with emphasis on those that include discussions of Roanoke Island. Researchers are often surprised to discover that the Raleigh Collection contains many of the major exploration narratives and propaganda works of the period, including writings by Richard Hakluyt and Thomas Hariot. Current studies of these and related writers are acquired selectively.

North Carolina Collection staff also note important journal articles about Raleigh or the Roanoke Island colonies, and the issues containing them are ordered for addition to the Raleigh Collection. Subscriptions are maintained to several serial publications that regularly contain Raleighana, most notably the Reports and Transactions of the Devonshire Association for the Advancement of Science, Literature and Art. All 134 (as of 2002) volumes of this series, which began in 1862, are held.

In addition to its printed Raleighana, the North Carolina Collection maintains in its Gallery several period rooms and exhibits about the explorer and his times. Two historic rooms located on the opposite end of the building from Wilson Library’s special collections research room focus on Raleigh and his life as an upper-class English gentleman. Appointed with original English furniture from the late Elizabethan and Jacobean periods, they also feature fine English oak paneling originally used in a Raleigh-era manor house in southwestern England. An over-sized dramatic wooden statue of Raleigh dominates the larger of the rooms. The statue was given to the University in 1931 by Colonel Owen Kenan and has been displayed in the Raleigh Rooms since their construction in 1954. Other furnishing include an unsigned oils-on-board portrait of Raleigh, circa 1590; a silver-plated bronze cast statuette of Raleigh on horseback from the Victorian period; and framed sixteenth- and seventeenth-century maps.

Several exhibits in the Gallery’s main area also highlight Raleigh and his Roanoke Island colonies. Among items displayed there are color facsimiles of John White drawings of the American Indians; English oak statuettes of Raleigh and Queen Elizabeth I, circa 1760; and a wrought iron ax that was excavated on Roanoke Island in 1862 and is believed to date from the Raleigh colonies.

The North Carolina Collection is strongly committed to developing further its already distinguished holdings of Raleighana. Efforts to collect new books, pamphlets, audiovisuals, maps, photographs, newspaper clippings, and other materials related to the explorer and his times are continuing. By making available to scholars a strong collection of Raleighana and by offering visitors the opportunity to learn about Raleigh through period rooms and exhibits, the North Carolina Collection at Chapel Hill seeks to promote continued interest in and study of the English explorer most directly associated with the spread of European culture into what is now North Carolina.