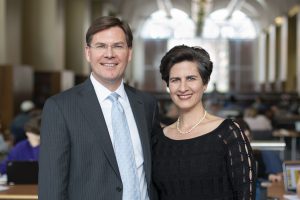 A shared passion for the rich history and spirit of Persian culture has driven Vance L. Horner II ’92 and Shaida Jarrahi Horner ’93, MAC ’94 to support and advocate for the growth of Persian studies at their alma mater from the time they were young alumni.

That they have made the University Libraries a key part of their philanthropy reflects the way Persian culture itself shapes their desire to give. Because, beyond legacies of ancient poetry or beloved cuisine, Persian culture promotes a tradition of inclusion and belonging.

So do libraries, says Shaida Horner. And, where better to discover an unfamiliar culture than the library?

“The library is a place of community and for all ideas,” she says. “We wanted to find ways through the library to invite the public to come to campus and learn more about this part of civilization.”

“Just as Persian culture supersedes any one nation-state, the library transcends boundaries,” says Vance Horner, who is completing his first term on the Friends of the Library Board of Directors.

Vance and Shaida first met as Carolina students in 1991. When they married in 1995, Shaida’s community welcomed her husband with open arms. It quickly became his community, too.

“They put hospitality first,” says Vance. “And, that’s what we think about North Carolina, a place where there’s a dinner party every weekend and we welcome everyone to the table—not just for a meal, but for conversation and laughter. If you want to know one thing about Persian culture—that’s what it’s like. We want to share that with Carolina.”

The Horners made their first contributions to the Jarrahi Family Library Fund for Persian Studies. Shaida’s father, Dr. Ali Jarrahi, established the endowment to help the University Libraries acquire materials and media relating to Persian language and culture.

Dr. Jarrahi emphasized the importance of private giving, encouraging his daughter and son-in-law to find room in their budget for philanthropy, even in the midst of what Shaida calls “the survival years” of cultivating careers and raising small children.

“He would always include us in discussions about his plans for giving. Then he’d say, ‘Now, what are you going to do?’” says Shaida. “‘Who is going to do it if you don’t?’”

The series, which began in 2018 with a lecture on classical Persian poetry, will introduce a wide University audience to Persian culture and to the Library’s Persian collections. It also gives members of the local Persian community an opportunity to come to Carolina and celebrate their culture.

“It is truly extraordinary that this family, along with the Persian community, has taken such an active role in making sure that resources on Persian studies can be available to everyone,” says Carl Ernst, Kenan Distinguished Professor of Islamic studies and director of the Carolina Center for the Study of the Middle East and Muslim Civilizations. It was in Ernst’s honor that Dr. Jarrahi created the endowment for Persian studies materials.

“Persian culture has a tremendous legacy that we can all connect with no matter our background. This is a history that goes back well over 2,000 years and it has been the center of a tremendous amount of literature, science, philosophy and art,” Ernst says.

Shaida recognizes that many people lack real knowledge about her parents’ country. Ernst’s extensive scholarship on something so important to her is motivating.

“For an American faculty member at Carolina to have that much passion for and knowledge of this culture has inspired us to help in any way we can,” she says.

Vice Provost for University Libraries and University Librarian Elaine Westbrooks says she is grateful that the Horners have recognized the Library as a partner in sharing this knowledge with the campus and the local community.

“Persian culture has a rich history that people often don’t know well enough,” she says. “When you come to Carolina, you come here to learn about people from different cultures and back- grounds. Thanks to Vance and Shaida, plus their entire family, students now have access to outstanding scholars and researchers on Iranian and Persian culture and history, and they are better off for it.”