Few episodes in Carolina’s recent history have been as fraught as the debate over “Silent Sam,” the Confederate monument that formerly stood at the entrance to campus.

Protestors toppled the monument on August 20, 2018, and officials swiftly removed it. Five months later, Chancellor Carol Folt punctuated her resignation announcement with an order to dismantle and remove the statue’s remaining pedestal and plaques.

The protracted conflict—with its protests, counter-protests, petitions, news cameras and rallies—has played out dramatically and very much in the public eye.

Meanwhile, just a quad away, librarians and archivists at the Wilson Special Collections Library have taken on a different kind of monumental task: helping people make sense of the statue’s controversial past and the role that it continues to play on campus, even in its absence.

“Libraries are about truth, evidence and memory,” says Vice Provost for University Libraries and University Librarian Elaine Westbrooks. “Everything we know about the monument and its history is known thanks to the documents preserved in Wilson Library and the efforts of librarians and archivists to make them visible and available for use.”

The power of these documents to motivate real-world action became clear when student activists looked to the archives at Wilson Library for context. There, they encountered a troubling 1913 address by University Trustee and Confederate Army veteran Julian Carr, sharing it widely on social media as they called for the monument’s removal.

At the dedication of the monument, Carr had told the crowd, “One hundred yards from where we stand, less than 90 days perhaps after my return from Appomattox, I horse-whipped a negro wench until her skirts hung in shreds, because upon the streets of this quiet village she had publicly insulted and maligned a Southern lady.”

The speech given by Julian Carr at the dedication of UNC’s Confederate monument in 1913 is part of the Southern Historical Collection at Wilson Library: go.unc.edu/CarrPapers.

“No one has to wonder what this monument means,” says María R. Estorino, associate University librarian for special collections and director of the Wilson Special Collections Library. “The speaker reminisces fondly about violence and the subjugation of enslaved people. It’s important to have specialists who can put this into context of both the past and present.”

That creation of context takes many forms, says Estorino.

“As a special collection, every part of Wilson Library contributes to our understanding of this monument and this history,” says Estorino. “This is an issue that touches our collecting, preserving, describing, digitizing, contextualizing and teaching. Through all of these activities, we offer pathways for Carolina’s campus and community to connect with this history, even when it is painful.”

Although calls to remove the Confederate Monument date to the 1960s, the conversation—and the quest for information—intensified over the last decade.

Wilson Library archivists and librarians recognized that they had a unique contribution to make and began digitizing documents from the collections to make them more accessible. As stewards of this information, the library empowers people to reach their own understandings about the monument and gives people a foothold, says University Archivist Nicholas Graham.

“The collections here in Wilson are vast, so, while available to the public, this kind of research can take a lot of time,” says Graham. “We want to make it as easy as possible for people, especially students, to consult these original materials so they can dig in, read the original sources and draw conclusions about the monument on their own using the evidence we have.”

These efforts have brought the original documents and records of this history under the scrolling fingertips and scanning gaze of a digital audience. 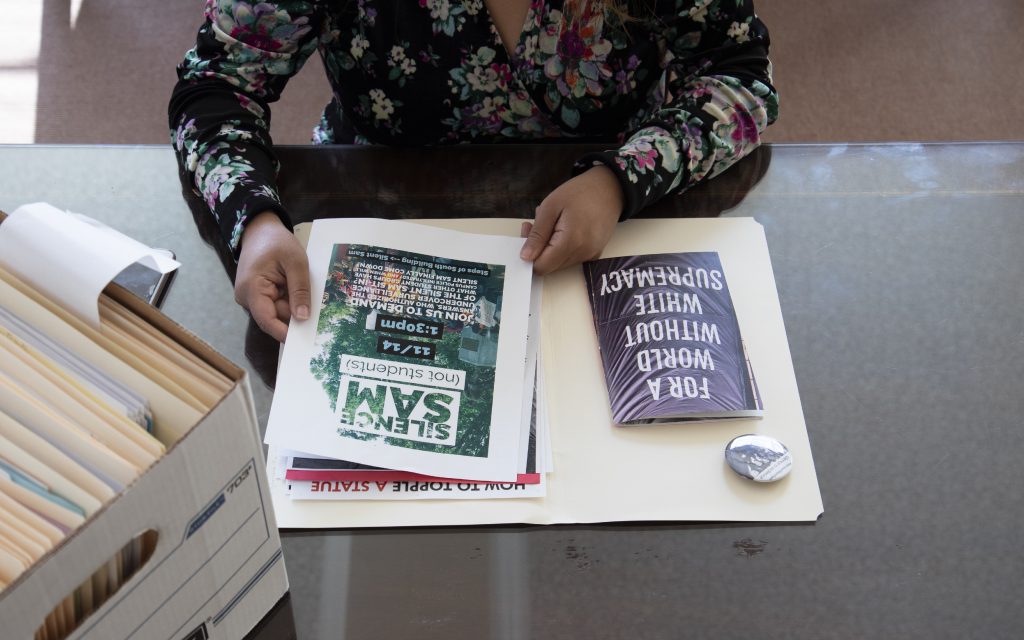 “We help people understand this issue by connecting them with sources where they can find real evidence,” says librarian Sarah Carrier about the Wilson Library collections related to the history of UNC’s Confederate monument.

Wilson Library staff also created research guides and a timeline of the monument, all backed by the newly digitized sources. “A Guide to Resources About UNC’s Confederate Monument” begins with the 1908 United Daughters of the Confederacy’s request to build the monument, continues through the vocal opposition of the 1960s and ends—for now—with the monument’s fall.

Even with so many documents now online, more guidance is sometimes needed. That’s where Wilson Library’s unique expertise and teaching mission come in.

Sarah Carrier, North Carolina research and instruction librarian, helps faculty and students use the collections in their classwork and curricula. The monument and student activism are big issues for them, she says.

“We help people understand this issue by connecting them with sources where they can find real evidence—in the voices, experiences and documents we’ve collected on this issue for over a century. And, we can talk to them about that history,” says Carrier.

It’s more than information and education, it’s empowerment, she says.

“The news and social media surrounding the monument are really overwhelming. I encourage students to bring their questions to the original documents and evidence they haven’t considered,” says Carrier.

Professor James Leloudis from Carolina’s department of history has been relying on Wilson Library to study the South since his undergraduate days. The Library, he says, has been a critical tool for both his scholarship and teaching. Graham, Carrier and other library staff across campus are “remarkable citizens of the University,” he says, for recognizing and embracing the opportunity to respond so quickly.

The monument often leads to deeper discoveries about Carolina’s relationship to slavery—how early students brought enslaved persons to campus or how many of Carolina’s buildings were built with slave labor. It’s a tough topic for students to unpack, says Leloudis.

“It’s been an incredible experience for me to go to Wilson and sit down with a student and a box of material to try to put together this puzzle. It’s one thing to read what someone writes in the news, but there’s something about discovering it for yourself,” he says. “You’re the detective—you can collect clues and put the pieces together. We have this opportunity to learn about the past from some of the best collections in the world, and that is how we can start to imagine the future we want.”

The staff at Wilson Library is focused not only on preserving and opening up the past. They have also thought deeply about what future students and researchers will need to understand today’s conflicts and problems.

For example, archivists are proactively collecting and preserving materials from current student and campus experiences. As they archive websites and social media posts (with permission) that extend the story of the monument into the 21st century, they also look for ways to connect with students to let them know their materials matter to Carolina’s legacy. 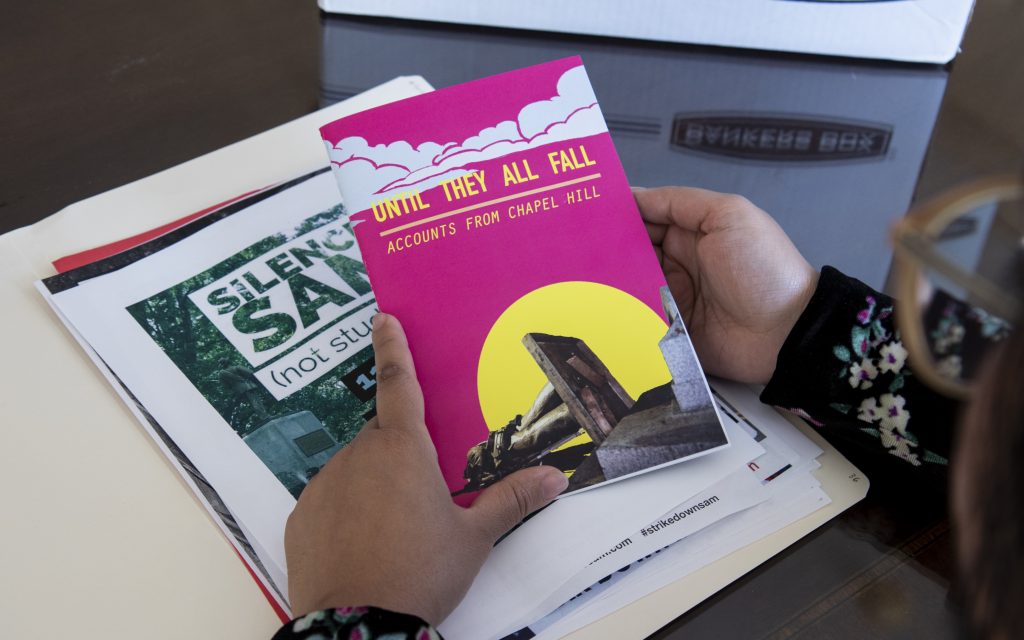 “To collect the information that people will want in 100 years, we need to be present, where conversations are happening and get to know the people and the issues,” says Estorino. “It goes beyond collecting to building trust— we must be respectful and mindful of their experiences.”

Westbrooks says that future is what takes the University Libraries’ role from simply the steward of the monument’s history to a community partner in helping campus heal and reconcile its past. Chancellor Folt stepped down amid a University divided on the future of the felled statue. As Carolina sought a way forward, Estorino served on the Faculty Advisory Committee on the Confederate Statue, bringing her perspective to the ongoing dialogue.

Though the monument’s home for more than a century is now another patch of grass along McCorkle Place, the conversation is far from over, says Westbrooks.

“This campus is actually at the beginning of working through this and, as the Library, we can be part of that healing and the restorative justice that can come from learning about and processing our past,” she says. “It will be such a missed opportunity to see this as just about a monument. To be a great public university leading difficult discussions, we have to know where we’ve been. First, you go to the archives. Then you can go on with deeper understanding, start to move forward, and heal.”

The work of Carolina’s librarians and archivists makes it possible for anyone to view historical documents about the Confederate Monument and to trace the recent history of controversy and protest on campus. Here are sites to get started.