On the Move: Stories of African American Migration and Mobility

The year 2019 marks 400 years since the first enslaved Africans were brought by force to North America in 1619.

It’s an anniversary that caused Chaitra Powell, African American collections and outreach archivist at Carolina’s University Libraries, to reflect on other examples of physical and social movement in African American communities over time.

Powell is the curator of “On the Move: Stories of African American Migration and Mobility.” The free public exhibition features holdings from the Wilson Special Collections Library. It will be on view there from September 14, 2019, until February 9, 2020. 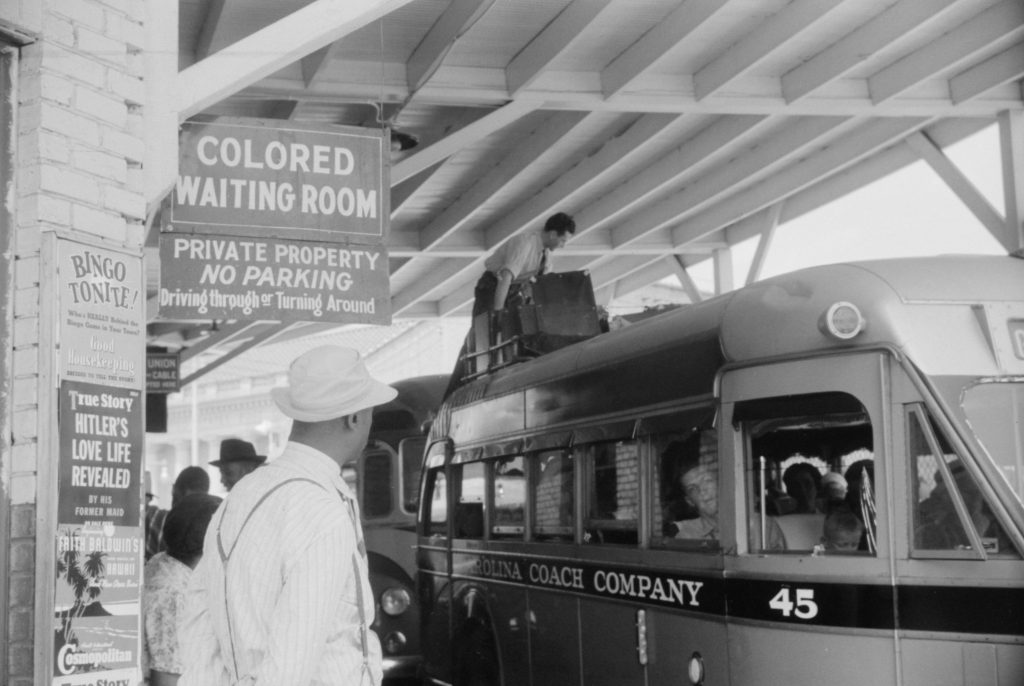 A segregated bus station in Durham, North Carolina, in 1940. Photo by Jack Delano, courtesy of the Library of Congress.

Powell is excited about “On the Move” because it uses modes of transportation to connect various points in African American history. She hopes the novel approach will draw people in and cause them to ask new questions about that history.

“The way you arrive has everything to do with what happens after,” says Powell.

She chose to highlight six modes of transportation and their intersection with the lives of African Americans: the ships of the trans-Atlantic slave trade; movement on foot, as exemplified by those fleeing slavery; the trains that enabled the Great Migration that brought many black Americans from the rural South to urban areas in the North and Midwest; buses, which Powell calls a “chronic flashpoint” during the civil rights era; cars and the intertwined promise and dangers of personal mobility; and airplanes as a symbol of military experience.

Exhibition visitors will see an early diagram of how enslaved people were packed into ships for the voyage to the Americas. The average dorm room, says Powell, is about 150 square feet. “Now imagine 20 people on the floor in that space,” she says.

They will also learn about stories such as that of “Dolly,” who ran away while enslaved in the Carolinas; the Pullman train porters whose income raised the social class and economic status of their families; and aviator Eugene Bullard, who had to move to France to learn to fly and then piloted heroically for that country during World War I.

Filmgoers who saw the movie “Green Book” will be able to view a facsimile copy of the guide that helped African American motorists plan trips to avoid discrimination and danger.  The book, says Powell, is a symbol of constant tension between the desire to be physically and socially mobile, and the risks of actually doing so.

Powell recognizes that the exhibition is a survey and hopes that viewers will be motivated to learn more. “I hope they will see that African American history is really an important lens for learning about American history,” she says. “That’s the thesis of my job!”

On November 13, the University Libraries will sponsor a screening of the 1926 thriller “The Flying Ace,” followed by a discussion with Carolina professor Charlene Regester and a tour of “On the Move: Stories of African American Migration and Mobility.” Lunch will be provided. Please register online or email libraryevents@unc.edu for information.