Howard Holsenbeck’s Gift to the Future 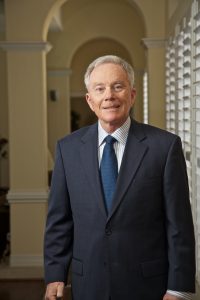 Howard Holsenbeck ’63 knows that libraries are made to be used. As an undergraduate and Civil War buff, he thrilled to find old editions of the Charleston Mercury in the stacks of Wilson Library. He would sit in the absolute silence, poring intently over the news of the day from a century before.

Through a successful career as a real estate investor, Holsenbeck always found it a joy and a responsibility “to share my good fortune with Carolina,” and especially with the University Libraries.

To ensure that Carolina’s libraries will always be here for the use of curious students and serious exploration, Holsenbeck has now included the Library in his estate plans. Not only has he set up an automatic annual transfer from his retirement fund to the University, but he has also arranged for the entire balance of his retirement and stock accounts to come to Carolina, including the Library, when it comes time to settle his estate.

“Too few people think about the future of their estate,” says Holsenbeck. He wants people to know that without a plan, they risk bypassing important financial benefits during their own lifetimes and for their heirs. Even more important, he says, they lose out on the opportunity to be part of something larger than themselves.

“Everything I give to is bigger than me. Charitable planning for the future is important to me, and it should be for everybody,” he advises. What better way to ensure your wishes are fulfilled and your favorite charities are positioned to plan for your future gifts?

Holsenbeck takes pride and satisfaction in being part of the University and its academic program, especially when he looks at all that Carolina’s alumni and faculty have accomplished. It is deeply meaningful, he says, “to be involved in that kind of continuing legacy. A great library is a depository of information that everybody on campus uses.”

If he has one piece of advice for Tar Heels, it is to “think about giving back to Carolina. Remember how important the time you spent here was to you and give back.”

Many donors have chosen to include the University Libraries in their estate plans. Planned gifts, such as bequests, charitable gift annuities, charitable remainder trusts, real estate, personal property and other assets, are an easy way to make a meaningful gift, while also possibly benefiting from certain tax advantages. (Consult a financial professional or broker for advice.)

To explore the impact your gift could have on Carolina’s libraries, contact Ryan Clark, assistant director of Library development, at rclark@unc.edu or (919) 962-3694, or visit unclegacy.org.

Tagged with: donors, Friends of the Library