Our Recent Acquisitions Evening is just around the corner on Thursday, April 4. As we eagerly await the event, we continue our blog feature of recently acquired items that will be on display on Thursday evening. They include a wide variety of materials related to biological and health sciences from across the special collections. Join us at the event and see them close up!

Herbarium Blackwellianum emendatum et auctum, more commonly known as the “Blackwell Herbarium,” is a later edition of the book A Curious Herbal. The book, published in the mid-1700s, is a collection of illustrated, engraved, and hand-colored plant specimens by Elizabeth Blackwell. She had no formal training in art, but drew the different plants she saw in person at the Chelsea Physick Garden in London. Her husband, who was in debtors’ jail, wrote the scientific names and medicinal properties for each of the drawings. Through selling copies of Blackwell Herbarium, she was able to raise enough money to free her husband from prison. 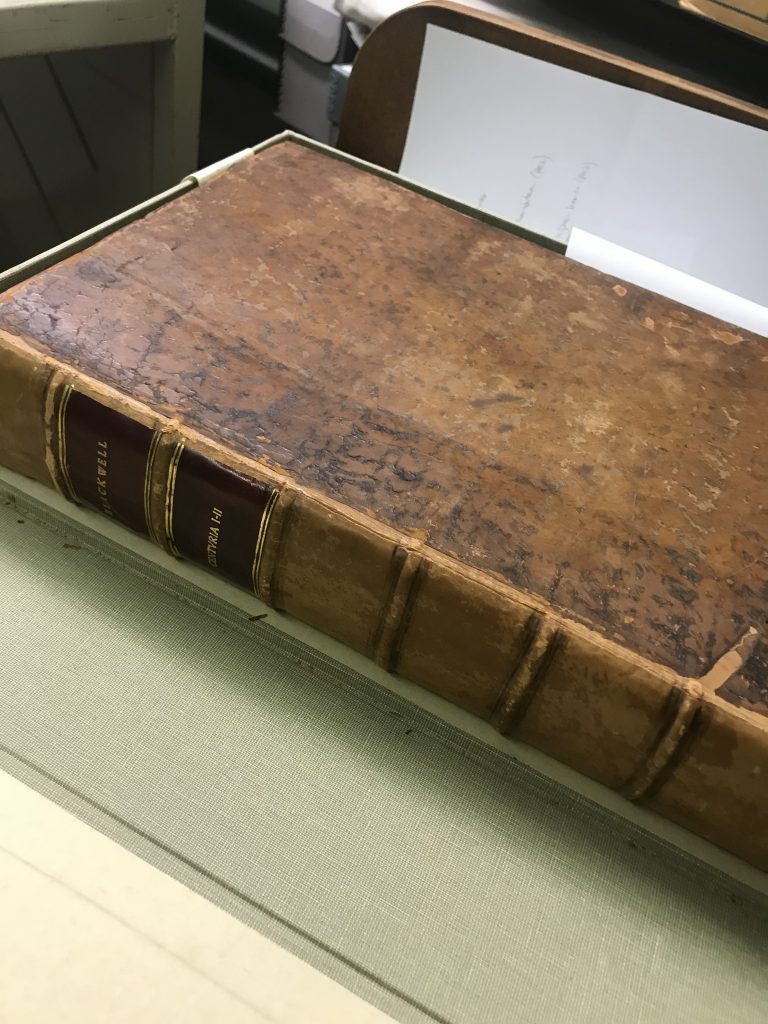 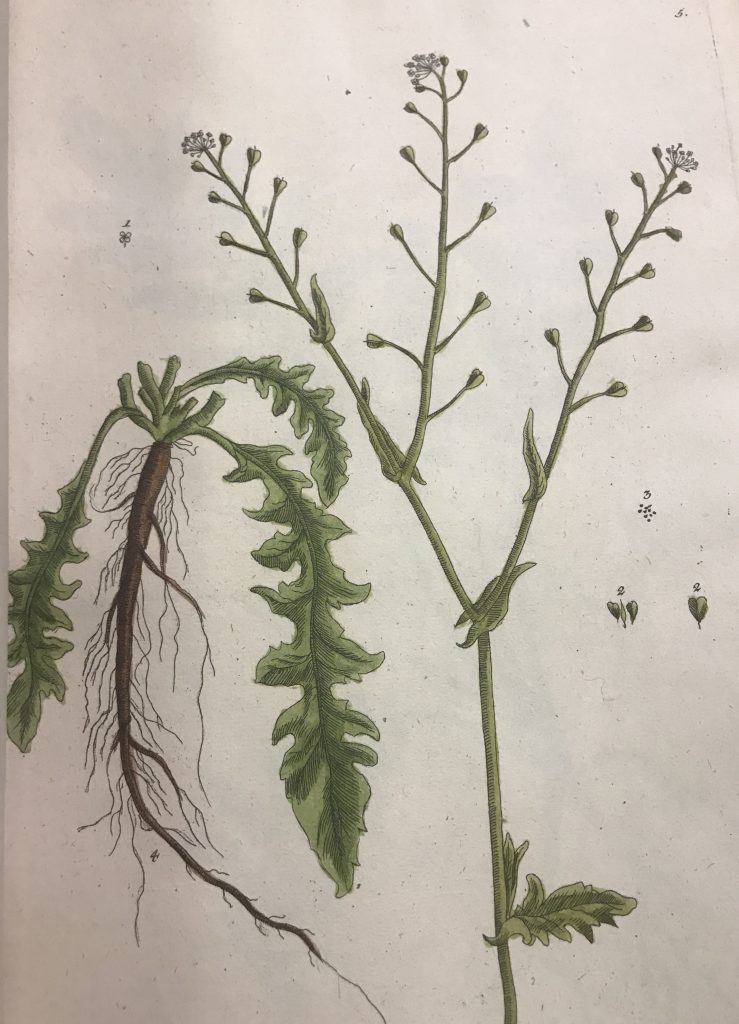 The Rare Book Collection at the Wilson Special Collections Library owns the first four of the six volumes of the second edition of her book. They were presented in honor of Edward Vernon Howell, the first Dean of the UNC School of Pharmacy by her sister, Emily Royster Howell Kyser, who was the first licensed female pharmacist in North Carolina, and her son, James Kern Kyser.

Before the Pure Food and Drug Act (the precursor to the Food and Drug Administration in the United States) was passed in 1906, patent medicines, also known as nostrums, were products that were heavily advertised as cures for various ailments and sicknesses. Most patent medicines had varying degrees of efficacy. Sometimes they contained ingredients that could make people even sicker. 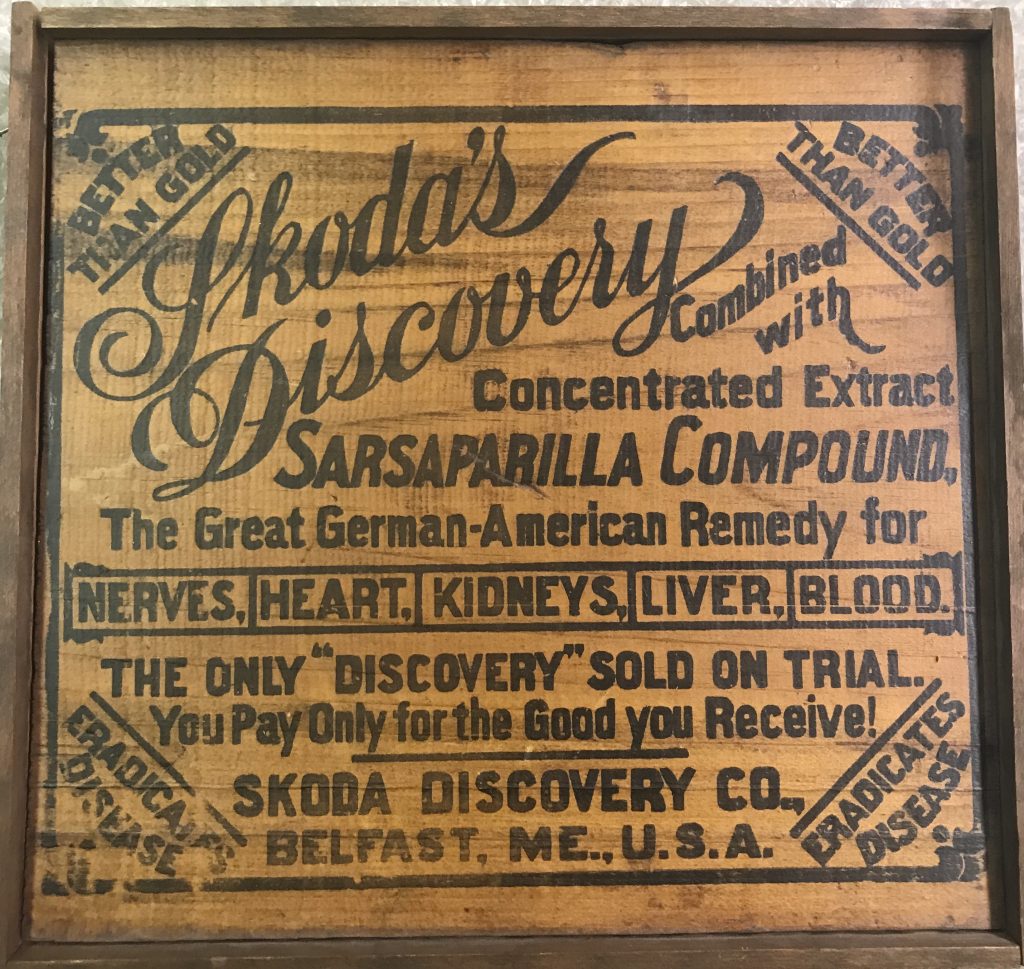 Bericht von den wunderbaren bezoardischen Steinen, published in 1589, is a book on poisons, antidotes, and bezoars. Bezoars, which have been popularized due to their frequent references in the Harry Potter series of books and movies, are hard, stone-like masses that form in the gastrointestinal tracts of different animals. Since the 1200s, bezoars, especially those from the intestines of goats, have been rumored to have magical healing properties and can act as antidotes to different poisons. This book is especially interesting because the cover is an example of manuscript waste – a recycling of discarded handwritten medieval books. The cover recycles pieces from a 12th century copy of The Book of Judith, a section from the Old Testament of the Bible.

This book and many other titles are a part of the Sheldon Peck Collection on the History of Orthodontics and Dental Medicine.

From 2004 to 2017, Bob Goldstein, James L. Peacock III Distinguished Professor in the Biology department at UNC-Chapel Hill, created colorful screen-printed posters to promote the distinguished lecture series hosted by the department. Nicknamed “gig posters for science,” the posters echo the style of screen-printed posters made to promote shows at local music venues. These surprising items in the University Archives demonstrate the rich variety of materials created by Carolina’s faculty members. 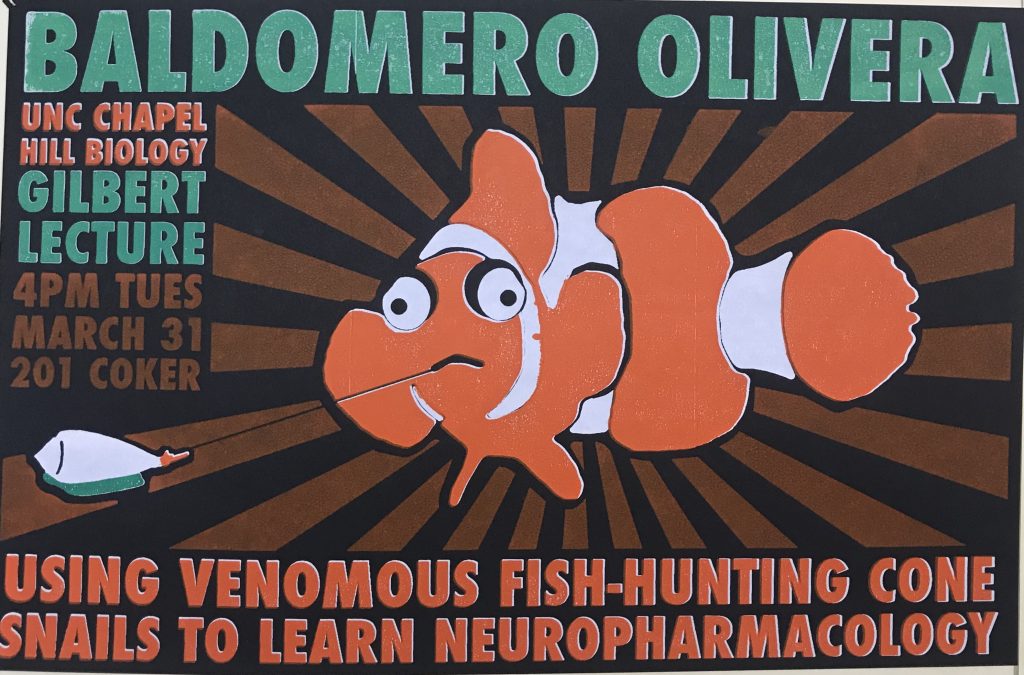 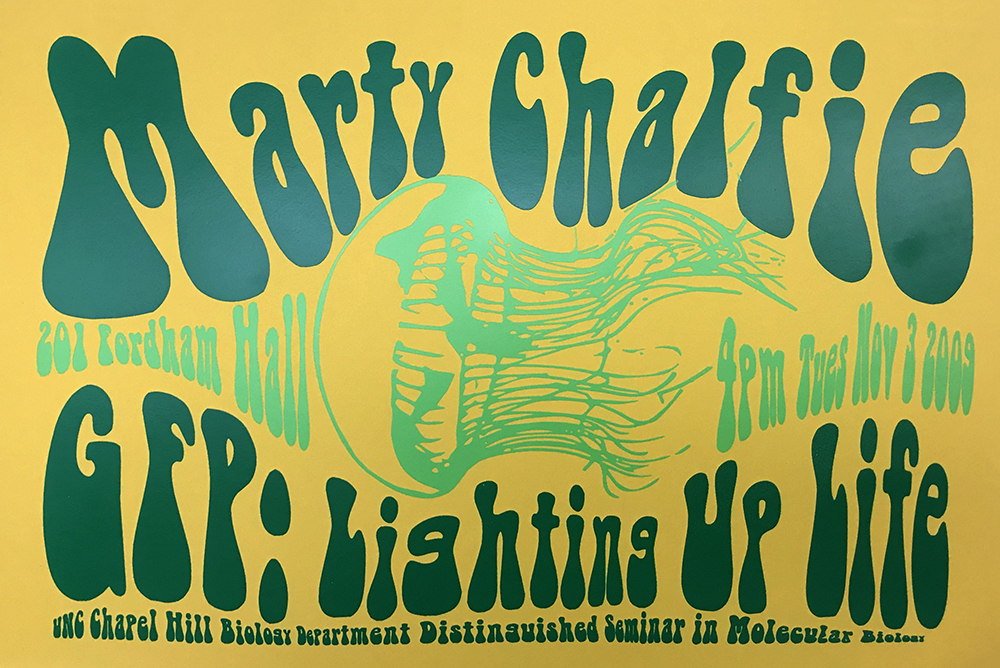 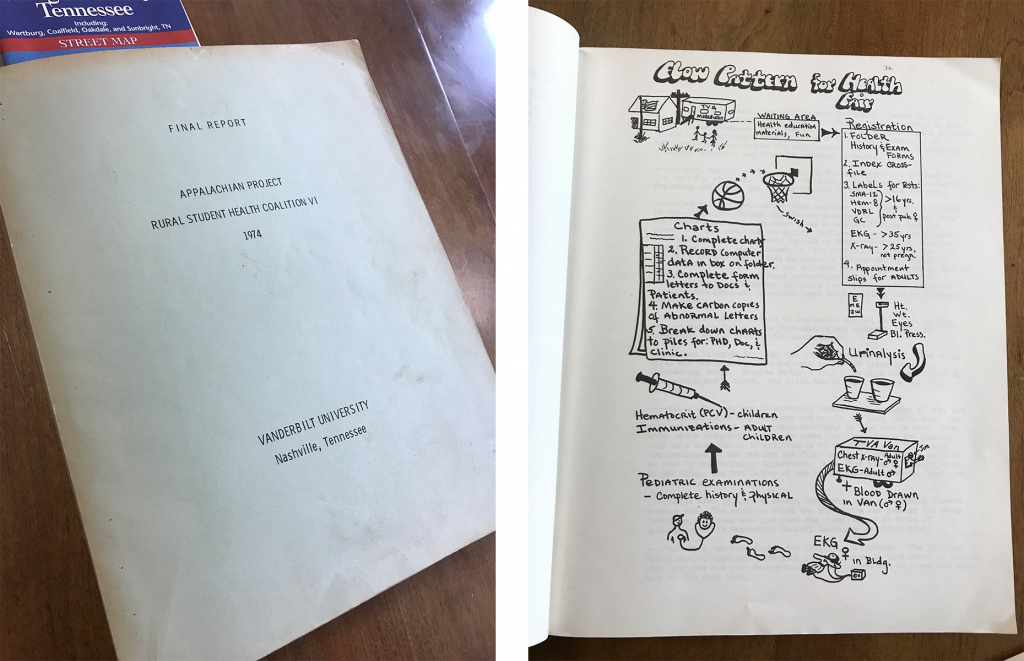 The Student Health Coalition was founded as a community-based partnership between Vanderbilt University students and community leaders in the southern Appalachian Mountains aimed at providing basic healthcare services and infrastructure in that region. At the end of each project year, the student leaders for that cohort would draft detailed annual reports that described the communities served, health fairs that were hosted, data about services provided to patients, and a coordinated plan for further grassroots organizing in those communities.

The illustration shown in this report depicts the typical flow of one of the two-week health fairs, and it also gives a sense of the DIY spirit that kept students and communities empowered towards improving health outcomes. The Southern Historical Collection is now partnering with alumni of the Student Health Coalition to document the group’s work and to raise the profile of ongoing health concerns in the Appalachian region, utilizing a “community-driven archives” approach which allows project participants to control how their own stories will be recorded and presented. 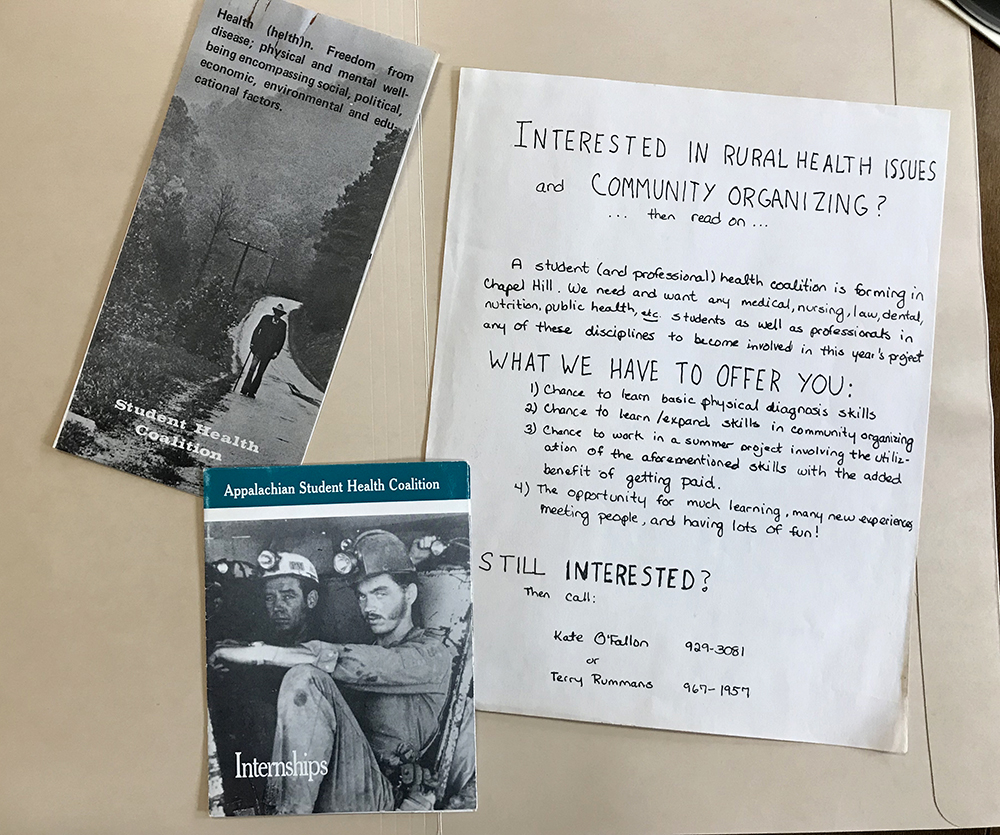 The ethos of the Student Health Coalition centered around a holistic view of health, defined by the World Health Organization (WHO) as “a state of complete physical, mental, and social well-being and not merely the absence of disease or infirmity.” This view aligned well with the work that the group was doing in southern Appalachia, since so many health issues there were tied to other more systemic challenges such as wealth inequality, labor struggles, and environmental pollution. The Coalition used this social justice-oriented vision in their recruiting materials in order to attract community-centered leaders. 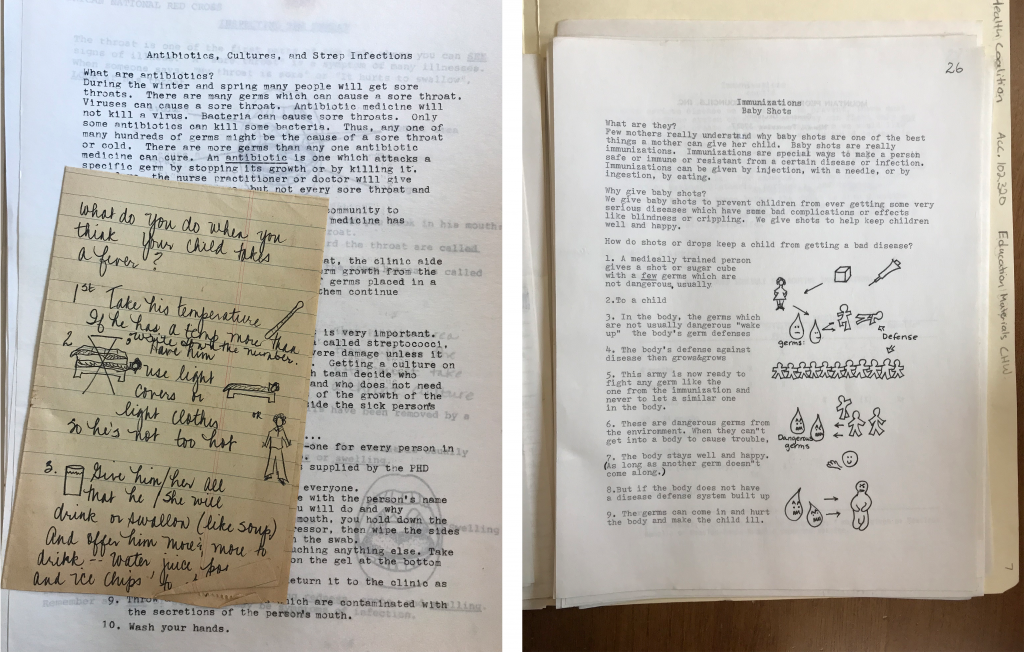 These materials were donated to the Southern Historical Collection by Diane Lauver, who participated in the Student Health Coalition in 1974-1975. Lauver’s role was to train Community Health Workers to act as embedded advocates for community health and to help patients connect with health providers. These papers contain drafts (with hand-drawn illustrations) of education materials Lauver created for training and orientation of Community Health Workers. Through the work of the Coalition, laws and policies in Tennessee were changed to allow for a broader set of direct-care providers, including nurse practitioners and community-based clinicians. 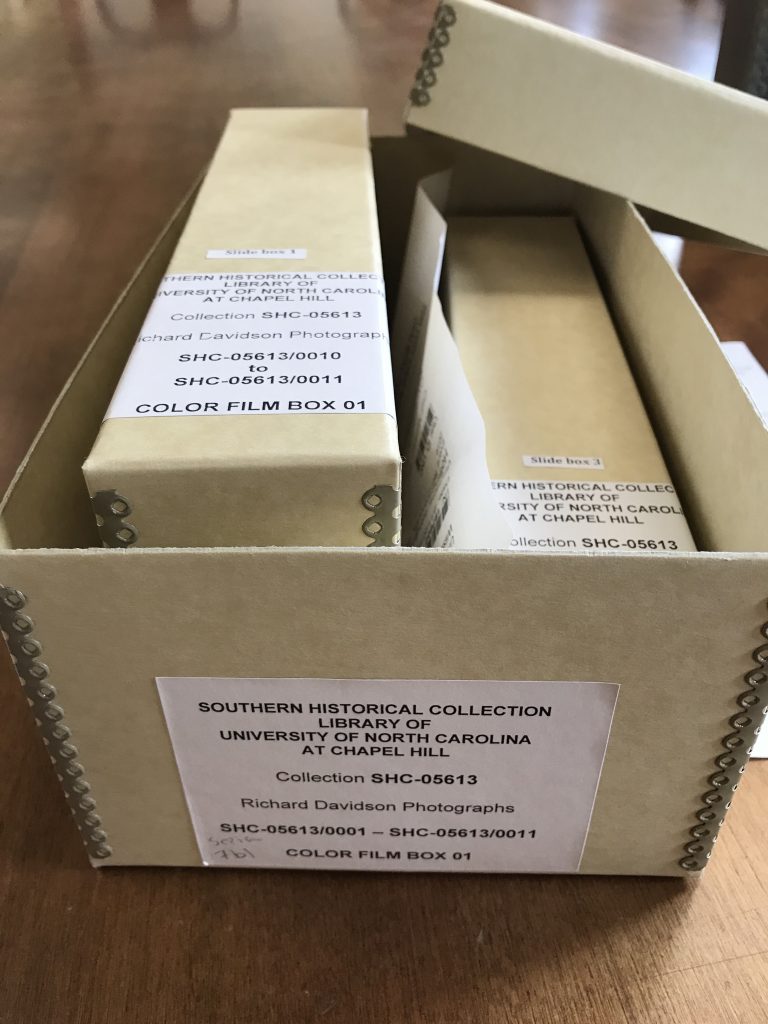 Richard Davidson was one of the founding participants of the Vanderbilt Student Health Coalition (SHC), and later a physician with the Mountain People’s Health Council (MPHC). Throughout his time with the SHC and MPHC, Davidson photographed many of the health fairs, community gatherings, and SHC meetings and social events in various locations around Tennessee, including Briceville, Clairfield, Murfreesboro, Norma, Petros, Smithville, Sneedville, Stoney Fork, and White Oak. In 2014, Davidson donated this collection of slides and prints to the Southern Historical Collection, as part of the community-driven archive project to document the work of the Student Health Coalition

The items pictured above, as well as many others, will be on display during our Recent Acquisitions Evening. We hope you’ll join us on April 4 for the unique opportunity to see these incredible items up close.