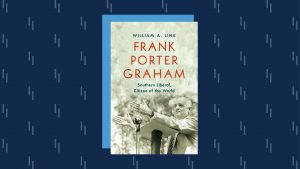 The University of North Carolina’s 15th president, Frank Porter Graham (1886 – 1972), was one of the most consequential white southerners of the 20th century.

In the new biography “Frank Porter Graham: Southern Liberal, Citizen of the World,” author William A. Link reveals how the personally modest public servant took his place on the national and world stage and, along the way, helped transform North Carolina.

Born in Fayetteville and raised in Charlotte, Graham became an active and popular student leader at UNC. After earning a graduate degree from Columbia University and serving as a marine during World War I, he taught history at UNC, and in 1930, he became university president. Known to many as “Dr. Frank,” Graham spent two decades overseeing UNC’s development into a world-class public institution.

But Graham regularly faced controversy, especially as he was increasingly drawn into national leadership on matters such as intellectual freedom and the rights of workers. As a southern liberal, Graham became a prominent New Dealer and negotiator, a U.S. senator, and United Nations mediator.

“Frank Porter Graham: Southern Liberal, Citizen of the World” is supported by the Albert and Gladys Coates Endowment Fund for the North Carolina Collection at the Wilson Special Collections Library. In partnership with the UNC Press, the Library has published biographies of presidents of UNC-Chapel Hill.

Previous books in the series are “The Good Government Man,” a biography of Albert Coates, who founded Carolina’s Institute of Government, and “Fire and Stone: The Making of the University of North Carolina under Presidents Edward Kidder Graham and Harry Woodburn Chase.”

Author William A. Link will speak about the book at these events: