In 2005, archivists at UNC-Chapel Hill developed “Slavery and the Making of the University.” The exhibition was one of the first systematic efforts on campus to examine the ways enslaved people enabled the University’s founding, growth and wealth.

Sixteen years later, a new generation of archivists at the Wilson Special Collections Library is leading efforts to reconstruct the lived experiences of enslaved individuals at and around the University.

Their efforts are part of On These Grounds: Slavery and the University. The national collaborative project takes a new approach to archival documents and the way archivists describe them. The goal is to understand “the lived reality of bondage at these institutions of higher education,” according to the project website. 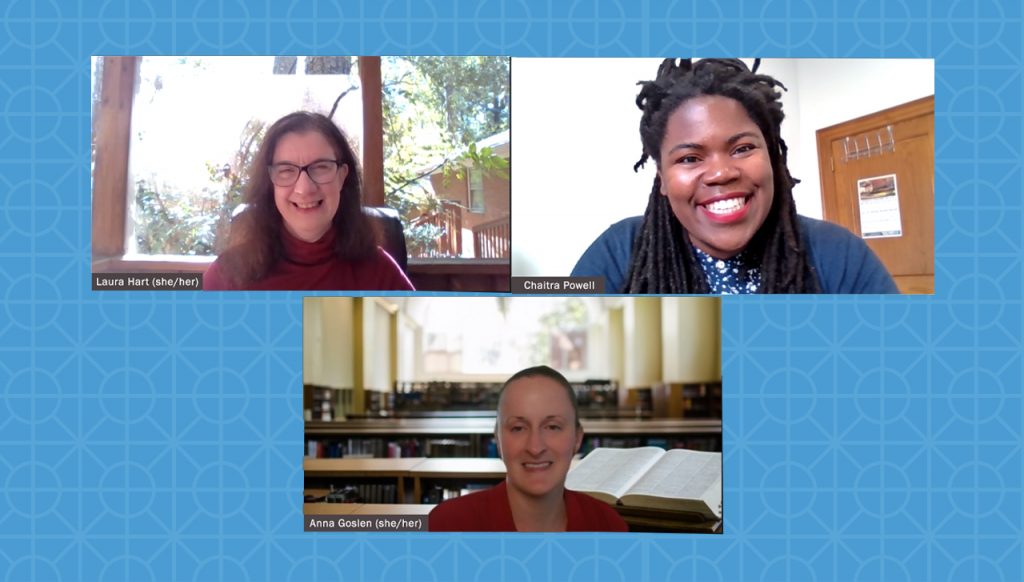 (From top left) Laura Hart, Chaitra Powell and Anna Goslen, on Zoom. They are members of the UNC-Chapel Hill project team for On These Grounds: Slavery and the University.

It’s a challenge that has long eluded historians and archivists, said Chaitra Powell, African American collections and outreach archivist at Wilson Library and manager of the project at UNC-Chapel Hill.

“There is this idea that Black history prior to emancipation is unknowable, that because enslaved people did not keep their own written records, then we’ll never know anything about their lives,” said Powell. “But if you work with intention, you can kind of piece it together.”

At the heart of the project is a database built around enslaved individuals and milestones or experiences in their lives, such as being born or dying, being sold or leased, receiving medical care, being baptized or laboring in a particular location or at a trade.

Powell and Hart, along with James Leloudis, professor of history at UNC-Chapel Hill, will comb through records from the University Archives and from the Southern Historical Collection. They will be looking for those hints in correspondence, contracts, diaries, business records and student records. A graduate student will code the information and enter it into the central database.

As one of five collaborative testing partners for the project, “we’ll be trying to break the system to improve it,” said Powell.

If enough institutions encode their slavery-related records using the same terms and data structures, and then enter that information into a single database, the compilation could eventually illuminate the lives of enslaved people and allow researchers to trace those lives through disparate documents.

“It’s all about the linked data,” said Hart.

Hart would love to see the project benefit descendant communities as well as researchers. Sometimes, individuals will contact Wilson Library with small bits of information or family lore, she said. “Often they know something like, ‘Joseph Caldwell [UNC’s first president] owned him’ or ‘my ancestors lived in the Chapel Hill area.’ It takes a lot to find your people if your people were enslaved.”

Unlike some of the other testing partners (Hampden-Sydney College; Rutgers, The State University of New Jersey; the University of Georgia; and Washington and Lee University), Carolina has a head start in examining its relationship with slavery and enslaved people.

In addition to Wilson Library’s earlier exhibition, Powell noted efforts such as the current University Commission on History, Race, and a Way Forward, co-chaired by Leloudis; class projects such as Names in Brick and Stone; and the renaming of campus buildings.

Because so many archival documents have been surfaced through this prior work, the project team at Carolina is also in position to investigate a second question: What is the experience of archivists and librarians when they spend so much time working with documents that are often disturbing and dehumanizing?

The traditional archival model, said Powell, is to say, “‘We didn’t make this history, we don’t know what people will do with it, we’re just cataloging it.’ There’s distance between the archivist and the history, the people implicated in the history. Just acknowledging that we are part of the story, that it impacts us and that we impact people by what we do with these records, is an act of radical empathy. We have the space to think about the emotional impact of working with these items.”

On These Grounds was developed collaboratively at Michigan State University, Georgetown University and the University of Virginia, in partnership with web publishing platform Omeka. A grant from the Andrew W. Mellon Foundation supports the work and will provide $14,000 to fund the graduate student who will work with Powell and Hart.

Carolina’s participation as a testing partner will last for one year, but the project team is hopeful that their work will continue well beyond that time.

“As an archivist, I have spent 25 years describing documents,” said Hart. “Now I have an opportunity to look at them with a different lens. It’s a shift I’m really welcoming.”