Transforming Gifts: How Donors Have Built the Special Collections at Wilson Library

The aspirations of a teenager in coal country and the misdeeds of nineteenth-century UNC students are among the unanticipated moments tucked into a new exhibition at the Wilson Special Collections Library.

Transforming Gifts: How Donors Have Built the Special Collections at Wilson Library highlights gifts both large and small that have made Wilson Library one of the leading special collections in the South.

The exhibition features many names identified with University history. These include the Hanes family, whose gifts of rare publications and early endowments established the Rare Book Collection, and the Kenans, who were early benefactors of the Southern Historical Collection. 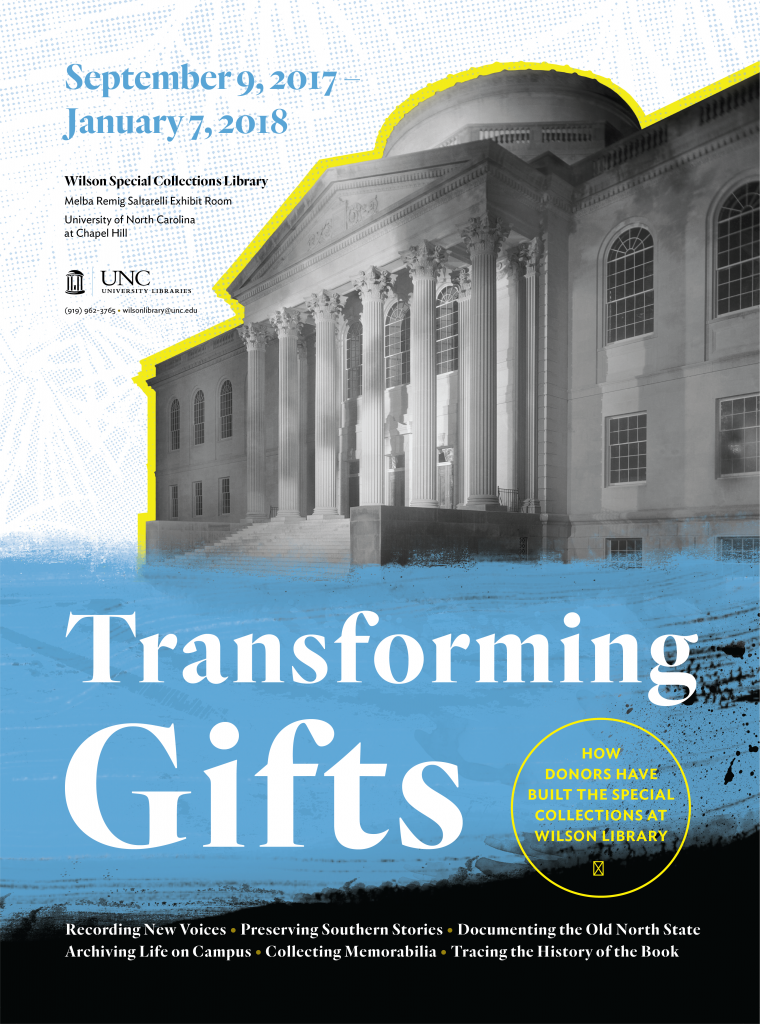 At the same time, not every important gift is necessarily a costly treasure.

Buttons, pins, and ribbons, from the Lew Powell Memorabilia Collection, offer a quirky glimpse into the state’s cultural, social, and political history. Powell, a former Charlotte Observer reporter and editor, donated them to the North Carolina Collection.

A “misconduct ledger” recorded student infractions at Carolina in the 1840s and is part of the University Archives, thanks to the Office of the Registrar. Lapses included “the cutting and eating of sassafras” and “playing on the flute in study hours (not the first time).”

Other elements of Transforming Gifts explore the good that monetary gifts accomplish. For example, photographs show fragile items before and after treatment in Wilson Library’s conservation lab. A 1998 bequest from T. Jack Lynch, ’37, established an endowment to further the work of UNC’s expert conservators.

As the University prepares to embark on a major capital campaign, the message of the exhibition is that every gift is unique and has an impact that extends far into the future, said Maria R. Estorino, associate University librarian for special collections and director of the Louis Round Wilson Library.

The exhibition’s various segments—Recording New Voices; Preserving Southern Stories; Documenting the Old North State; Archiving Life on Campus; Collecting Memorabilia; and Tracing the History of the Book—demonstrate the range of Wilson Library’s collections and activities, and the many and diverse donors whose generosity has advanced the Library’s mission.

“Celebrating our donors is, at its heart, a celebration of the work of the Library,” said Estorino.

Transforming Gifts will be on view in the Melba Remig Saltarelli Exhibit Room of Wilson Library through January 7, 2018.