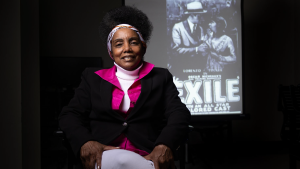 Charlene Regester, associate professor of African, African American, and diaspora studies and director of the Institute for African American Research, in the Media & Design Center at the House Undergraduate Library (photo by Andrew Russell)

Charlene Regester has been an avid patron of University Libraries since she was a PhD student. In fact, she was one of the first students to get to use the Walter Royal Davis Library — lovingly referred to as simply “Davis” by students and faculty today — which opened on February 6, 1984.

“Most people don’t realize I’ve been parked in Davis Library ever since I was a graduate student,” says Regester, now an associate professor in the Department of African, African American, and Diaspora Studies and acting director of the Institute for African American Research at UNC-Chapel Hill.

Back then, Regester was studying African American film history. Because she wasn’t located near major entertainment cities, like New York City and Los Angeles, she felt her next best option was to collect and read Black newspapers from those places. She spent hours in the basement of Davis flipping through them on microfilm readers. When she needed newspapers they didn’t have, she worked with staff to order them and eventually collected more than 30,000 articles.

Regester continues to study the history of Black cinema before 1950. Most films made by African Americans before this time period are hard to find, Regester points out.

“I think either through neglect or lack of interest or not understanding the value, these resources have escaped us,” she says. “Some films have been found in people’s attics or garages — and they had no idea the value of those films.”

Much of her research has explored the works of Oscar Micheaux, an early 20th-century American author, film director, and producer who made upwards of 40 films. One that has drawn the attention of multiple scholars is “Within Our Gates,” which was found in an archive in Madrid, Spain.

“The film was very controversial because it might be one of the few records of a lynching that’s visualized on screen,” Regester explains.

After Regester learned that the U.S. Library of Congress had obtained the film and translated it back to English, she hoped to get her hands on a DVD version to show in her classes. Staff members at the Media & Design Center within the R.B. House Undergraduate Library were instrumental in this process and have since found multiple Micheaux films for Regester to use in both her research and her courses.

Regester has also utilized Davis Library extensively. Librarians have helped her obtain film censorship records from the Margaret Herrick Library at the Academy of Motion Picture Arts and Sciences, paper collections on Black actors and filmmakers, and microfilms of African American newspapers, like the Chicago Defender and New York Amsterdam News.

“I’ve learned over the years that your research is only as good as the resources you have access to,” she says. “Having access to these materials has opened up a whole realm of opportunity to revisit the past and document it. I hope I have advanced the field because of my own interest in recovering and researching these films, getting a sense for how African American filmmakers had to make films without appropriate budgets or technological inventions. I’m trying to fill that void in history.”