14 books about courageous women in the military

This roundup of books highlights the tremendous impact of women who have fought for military equality — not only in the United States, but also in nations including Afghanistan, Syria, and England. The titles in this list follow women soldiers fighting to gain equal footing with their male counterparts, from one of the first women to become a US Special Operations warrior during the conflict in Afghanistan to an Afghan pilot searching for her place among the Afghan Air Force.

Compiled by Emily Arnsberg, a graduate assistant in the Undergraduate Library and a master’s candidate in the School of Information and Library Science. Emily is an Air Force veteran with over nine years of service. 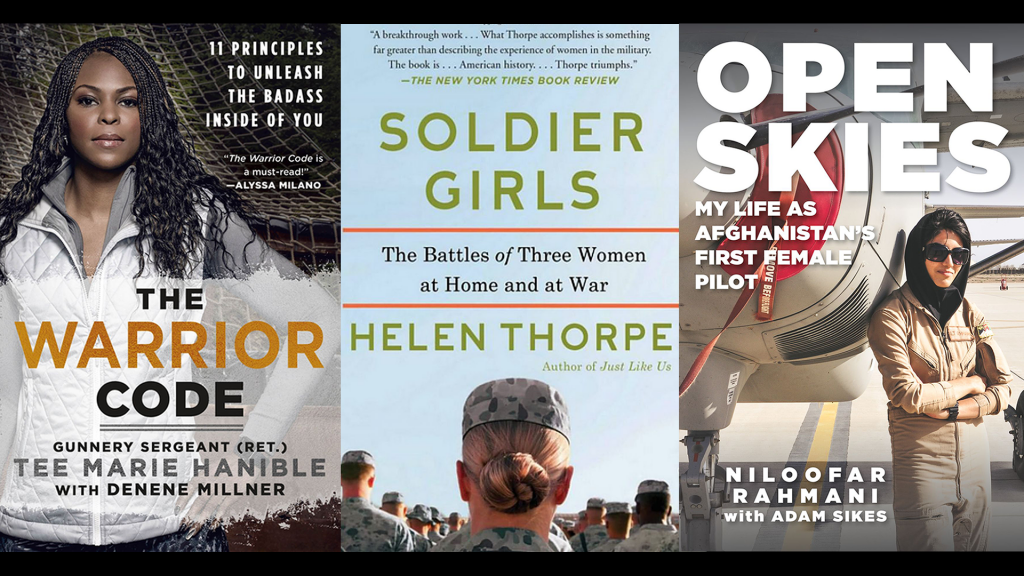 Ashley’s War: The Untold Story of a Team of Women Soldiers on the Special Ops Battlefield by Gayle Tzemach Lemmon (2015)

Lemmon’s work chronicles the story of the U.S. Army Special Operations Command pilot program, called Cultural Support Teams (CSTs), which allowed elite women soldiers the chance to fight alongside Green Berets and Army Rangers in Afghanistan. The program, which began in 2010, was the first program to put women in special operations. Ashley’s War is currently being developed into a major motion picture at Universal Studios with Reese Witherspoon and Bruna Papandrea producing.

Available in print and as an e-book.

This timely book illustrates another perspective of women in the military, through the eyes of an Afghan woman struggling to serve her country. Rahmani tells her story as the first woman fixed-wing Air Force aviator in Afghanistan’s history and the first woman pilot in the Afghan Air Force since the fall of the Taliban in 2001.

Available as an e-book.

Unbecoming: A Memoir of Disobedience by Anuradha Bhagwati (2019)

Bhagwati’s memoir offers a distinctive lens on her service in the Marines, tackling various issues such as Post-Traumatic Stress Disorder, sexual violence, misogyny, and racism, among many others. Born an obedient daughter of Indian immigrants, Unbecoming tells the story of Bhagwati enlisting in the Marines after graduating Yale, her later creation of the Service Women’s Action Network (SWAN), and her ultimate fight for gender equality in the military.

The Daughters of Kobani: A Story of Rebellion, Courage, and Justice by Gayle Tzemach Lemmon (2021)

Lemmon’s most recent title delves into the conflict in Syria and the battle against the Islamic State (ISIS). An all-woman protection unit of Syrian Kurdish Fighters, known as the YPJ, fast became the face of the war against ISIS and gained a reputation as fierce and effective fighters. Through the stories of four woman soldiers, Lemmon paints a picture of their combat against ISIS and their fight for women’s equality in the battle for the city of Kobani. Recently, this title was optioned by HiddenLight Productions as a future film adaptation.

Available as an audiobook.

Shoot Like a Girl: One Woman’s Dramatic Fight in Afghanistan and on the Home Front by Mary Jennings Hegar (2017)

This title follows Hegar, a National Guard pilot who was shot down while on a search and rescue mission during her third tour in Afghanistan. Despite her wounds, she battled the enemy and saved the lives of her crew and their patients. Similar to Unbecoming, Hegar transitions to civilian life, and embarks on a journey to fight for women armed service members in eliminating the military’s Ground Combat Exclusion Policy. This title is currently in development with Gotham Group Production company as a future book-to-film title.

Recruited to help the military break enemy code, more than ten thousand women moved to Washington D.C. during World War II to serve as codebreakers. However, a strict vow of secrecy kept their tremendous efforts hidden from the public. After multiple interviews with surviving code girls, Mundy illustrates the crucial role these courageous women took to affect the battlefield from home – and their role in breaking and creating the complex codes used by the world’s military and intelligence services.

Fight Like a Girl: The Truth Behind How Female Marines Are Trained by Kate Germano with Kelly Kennedy (2018)

This story chronicles Kate Germano’s struggle to achieve equality of performance and opportunity for women Marines in a service dominated by men. Germano’s timely tale has implications not only for the American military, but also for corporate America, education, and government organizations.

Available in print and as an e-book.

The Warrior Code: 11 Principles to Unleash the Badass Inside of You by Tee Marie Hanible and Denene Millner (2019)

Similar to Germano’s story in Fight Like a Girl, retired Marine Gunnery Sergeant Tee Marie Hanible describes her experiences in the Marine Corps and her deployment to Iraq in 2003, along with the 11 principles she learned in the service to help find her own inner strength.

Available as an audiobook.

Danger Close: My Epic Journey as a Combat Helicopter Pilot in Iraq and Afghanistan by Amber Smith (2016)

Amber Smith describes her experiences as one of the few women to fly the Army’s Kiowa Helicopter, and her captivating combat stories in both Iraq and Afghanistan, battling to gain the respect of her fellow pilots.

Available as an e-book.

Code Name: Lise: The True Story of the Spy Who Became WWII’s Most Highly Decorated Woman by Larry Loftis (2019)

Winner of multiple awards (Florida Book Awards Silver Medalist and Women’s Day Best Nonfiction books to read in 2019, among others), Code Name: Lise tells the story of Odette Sansom, a Special Operations Executive (SOE) agent in Britain during World War II, and her fight to survive during her mission and later captivity in a German concentration camp.

Available in print, as an e-book, and as an audiobook.

Love My Rifle More than You: Young and Female in the U.S. Army by Kayla Williams with Michael E. Staub (2005)

Kayla Williams illustrates her experiences of serving in the Army during the conflict in Iraq, and her battle for women’s empowerment and her own self-discovery.

Beyond the Call: Three Women on the Front Lines in Afghanistan by Eileen Rivers (2018)

Eileen Rivers tells the story of three women during the conflict in Afghanistan and their courageous efforts as members of the military’s Female Engagement Teams (FETs), precursors to the Cultural Support Teams (CSTs) described in Ashley’s War. This story not only shows combat through the eyes of these three women, but also their battles when they return home and are back in civilian life.

Formation: A Woman’s Memoir of Stepping Out of Line by Ryan Leigh Dostie (2019)

Dostie’s memoir chronicles her recruitment into the Army as a linguist, and her later trauma and struggles with Post-Traumatic Stress Disorder after being raped by a fellow solder. With commanders not trusting her story, Dostie fights through isolation and being ostracized by fellow soldiers to prove her worth in a world where the odds are stacked against her.

Soldier Girls: The Battles of Three Women at Home and at War by Helen Thorpe (2014)

Thorpe’s narrative, spanning 12 years, follows three women from enlistment in the Indiana National Guard, through deployment, and back home again. These three women thought that in joining the National Guard their attendance and work would be minimal, occasionally attending training. In exchange, they would be given the best chances available for them to better themselves: by attending college, having a steady paycheck, and engaging in something bigger than themselves. However, in the aftermath of 9/11, these women found themselves in combat zones in both Afghanistan and Iraq. Similar to Ashley’s War, Thorpe illustrates the impact of war and how it changes women, a subject that is often focused on the male perspective.