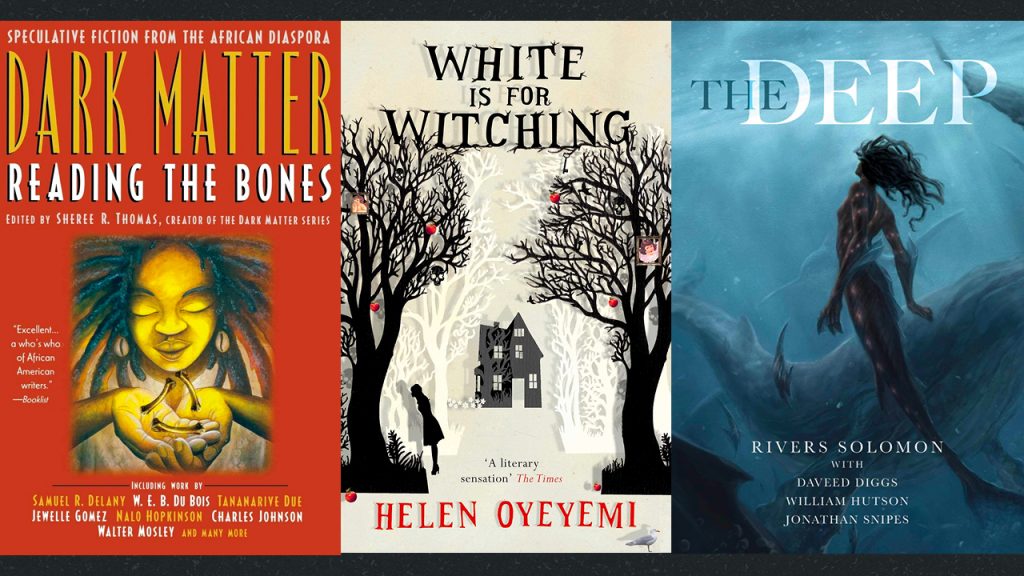 Connecting horror story tropes to African American narratives didn’t start with Jordan Peele’s Get Out! African American novelists have long been writing horror and suspense books that tell distinctly African American stories. You’ll find some of the classics of the form, by masters from Octavia Butler to Colson Whitehead, on this list compiled by Gregg Moore, manager of the Stone Center Library.

An amnesiac discovers that she is a vampire, with a difference: she is a new, experimental birth with brown skin, giving her the fearful ability to go out in sunlight.

Dana, a Black woman, is pulled back and forth between the present and the pre-Civil War past, where she ﬁnds herself enslaved on the plantation of a white ancestor whose life she must save to preserve her own.

Available in print, as an e-book and audiobook on OverDrive.

Maryse Boudreaux, a sword wielding bootlegger, with the help of her friends Sadie, a brash sharpshooter, and Chef, a female veteran of WWI, battle against the literal demons of the Ku Klux Klan.

Available as an e-book and audiobook on Overdrive.

Since Angela Toussaint left her hometown under horrific circumstances, there have been more senseless tragedies, and she wonders if they are related somehow. Angela must summon her own hidden gifts to face the timeless adversary stalking her in her grandmother’s house.

Available in print and online.

Forced to drop out of school to help support her family, Lena takes a lucrative job as a secret laboratory test subject. But devastating side effects make her confront the horror that has been forced on Black bodies in the name of science.

Available as an e-book and audiobook on OverDrive.

The Gilda Stories by Jewelle Gomez (1991)

“In sensuous prose, Jewelle Gomez uses the vampire story as a vehicle for a re-telling of American history in which the disenfranchised finally get their say. Her take on queerness, community, and the vampire legend are as radical and relevant as ever.”–Michael Nava

Available in print and online.

Brown Girl in the Ring by Nalo Hopkinson (1998)

The rich and the privileged have fled the inner city, leaving it to crumble. But now the elites need a harvest of bodies, and so they prey upon the helpless. With nowhere to turn, a young woman must open herself to ancient truths, eternal powers, the tragic mystery surrounding her mother and grandmother.

With works ranging from Caribbean folklore to passionate love to chilling horror, Nalo Hopkinson is at her award-winning best, spinning tales like “Precious,” in which the narrator spews valuable coins and gems from her mouth whenever she attempts to talk or sing. In “A Habit of Waste,” a self-conscious woman undergoes elective surgery to alter her appearance; days later she’s shocked to see her former body climbing onto a public bus.

The Devil in Silver by Victor LaValle (2012)

Mistakenly committed to a mental hospital, Pepper must battle the devil to save himself and his friends. LaValle examines America’s inhumane treatment of madness in a story that is by turns horrifying, suspenseful, and comic.

Sethe, an escaped slave living in post-Civil War Ohio with her daughter and mother-in-law, is haunted by the ghost of her dead baby girl.

Available in print, online, and as an e-book on OverDrive.

White Is for Witching by Helen Oyeyemi (2009)

Miranda Silver communicates with the ghosts of her mother and grandmother. But the Silver House manifests a more conscious malice toward strangers, dispatching those visitors it despises. Enraged by the constant stream of foreign staff and guests, the house finally unleashes its most destructive power.

The Deep by Rivers Solomon with Daveed Diggs, William Hutson, and Jonathan Snipes (2019)

The historian of the water-dwelling descendants of pregnant African slaves thrown overboard by slavers keeps all the memories of her people both painful and miraculous, until she discovers that their future lies in returning to the past.

Available in print, and as an e-book and audiobook on OverDrive.

This anthology features an extraordinary collection of speculative fiction of Black writers, introducing the genre to readers who may not have realized their depth and breadth.

In a post-apocalyptic New York, Mark Spitz works as a “sweeper”… occupied with the mundane mission of zombie removal, the rigors of Post-Apocalyptic Stress Disorder (PASD), and the impossible task of coming to terms with a fallen world. And then things start to go terribly wrong.