Apples. Apple butter and biscuits. Fried apple pies. Fermented apple cider. The celebration of the Southern apple was on mouth-watering display at a recent end-of-class gathering in Wilson Library. 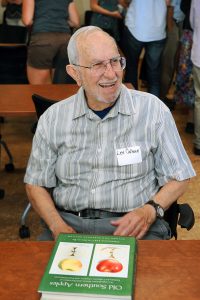 Guest of honor Lee Calhoun with his book on Southern apples

After the first edition of his book was published in 1995, Calhoun received hundreds of letters from apple enthusiasts, which he collected in a 400-page-plus notebook. He also helped to establish the Southern Heritage Apple Orchard at Horne Creek Farm, a N.C. historical site. The orchard has more than 400 varieties of Southern apple trees.

Students spent the spring transcribing the contents of the binder (which was also digitized by the library), and they developed cutting-edge team research projects to make the collection more accessible to the public. They created two mapping projects that explore both the stories of the people and the apples; a third project highlights recipes made with Southern apples. They also completed individual research projects.

Engelhardt said she asked students to go on a “research adventure” with her over the course of a semester, and she was impressed with their ambitious undertaking.

“The digital projects they have begun carry so much potential to make this collection visible. We’ve used the best of our digital humanities capabilities to showcase the stories of culture surrounding Southern apples,” said Engelhardt, the John Shelton Reed Distinguished Professor of Southern Studies and interim senior associate dean for fine arts and humanities in the College of Arts & Sciences. “Lee built his life around his love of apples and his love of mentoring, and we want people to know that this collection is open to the citizens of the state and the world.”

“It’s also no small task to transcribe a notebook, she added, “but that is the work we have to do as researchers. You have to have good information to begin.”

Planting the seed of an idea 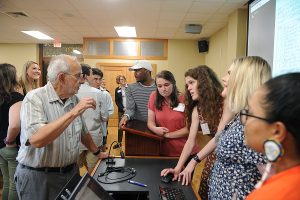 Diane Flynt, the founder of Foggy Ridge Cider, the first full-time cidery in the South, and Engelhardt had served on the board of the Southern Foodways Alliance together. Flynt had been mentored by Calhoun for more than 25 years, and she first called Engelhardt to make the connection. Joined by librarians from the Southern Historical Collection, they visited Calhoun’s home orchard in Chatham County last summer. Claire Bunschoten, an American studies Ph.D. student, accompanied the group to record an oral history with Calhoun that will become a part of UNC’s Southern Oral History Program. This summer she’ll work on adapting the students’ transcription of Calhoun’s notebook so that it is digitally searchable.

“Lee has a scientific mind, but also a curiosity in exploring lost treasures. He has an archivist’s brain,” said Biff Hollingsworth, collecting and outreach archivist with the historical collection, part of University Libraries. “This could be the collection that launches more. It’s really helping us to fill out our archives on the foodways of the South.”

Flynt, who attended the end-of-class gathering and also guest-lectured with Calhoun in the class, was heartened by the student’s creative research projects.

“Apple growing is a long game. There are fifth and sixth generation growers all around me in Virginia,” she said. “To see this through a young lens is part of [Lee’s] continuing legacy.”

Pomology (n: the science of growing fruit) and humanities research 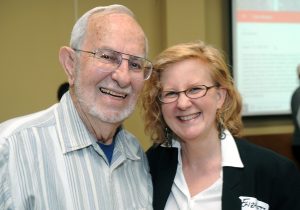 Peter Cohen, a public policy and food studies major, said participating in undergraduate research has helped to contribute to his well-roundedness as a student.

“To know we were the first people to spend time with this material was very empowering. A lot of trust and responsibility was given to us,” he said.

Maddie Dyer, a southern studies and media and journalism major, did her individual research paper on Southern foods, starting with apples, but expanding to include examples like the Georgia peach, and the ongoing “battle” between Duke’s and Hellmann’s mayonnaise.

“Food is definitely a way for people to express their Southern identity,” she said.

Andie McKinnon, a food studies major and sustainability minor, said the value of Calhoun’s collection will only increase over time and that it was an honor to help preserve these stories because “without the stories, these apple trees lose their meaning.”

McKinnon will continue work this summer in a new direction related to the class — through a Summer Undergraduate Research Fellowship, she’ll create a GIS map of fruit trees and shrubs on Chapel Hill public lands with the hope of using that information to help address food insecurity.

Bunschoten said she enjoyed working with the undergraduate students in the small seminar.

“This course attracted so many students of different backgrounds — on my team, I got to work with business, math and statistics majors,” she said. “It’s been so valuable to have their perspectives.”

At the celebration event, a new grower with an orchard in Ashe County asked Calhoun to sign a copy of his Old Southern Apples book. Others offered up toasts and congratulations to their mentor.

For Calhoun, the connection with the library is a sweet partnership that goes back years ago to when he first searched the North Carolina Collection for old nursery catalogues. He calls the acquisition of his papers “a godsend.”

“I had all of this stuff and I couldn’t figure out what to do with it. This has been our life’s work for my wife, Edith, and me for 40 years,” he said.

For the library, the collaboration with the class was a natural fit. The staff of Wilson Library have a deep commitment to providing unique learning experiences to Carolina students. Engelhardt first approached research and instruction librarian Sarah Carrier with the idea for the seminar. Carrier and Hollingsworth co-led weekly workshops in the library for hands-on work with Calhoun’s papers. Maria Estorino, associate university librarian for special collections, was supportive of the effort.

In terms of opening up the collection to the public, Hollingsworth noted, “All you need to get started in the library is a photo ID and some curiosity.”