When University of North Carolina at Chapel Hill sophomore Caroline Alessandro showed up for the first day of English 295, “Reconstructing Frankenstein’s Monster,” she was expecting a typical English class. “I figured we’d be reading “Frankenstein,” analyzing it and maybe looking at some other versions,” she recalls.

Instead, she and her eight classmates in English 295H devoted the spring semester to a daunting assignment: curating a full-scale exhibition in the Wilson Special Collections Library.

The result, “Reconstructing Frankenstein’s Monster: Mary Shelley’s World in Print,” is the latest in the University Libraries’ biennial collaborative exhibition series with instructors and their undergraduate classes. 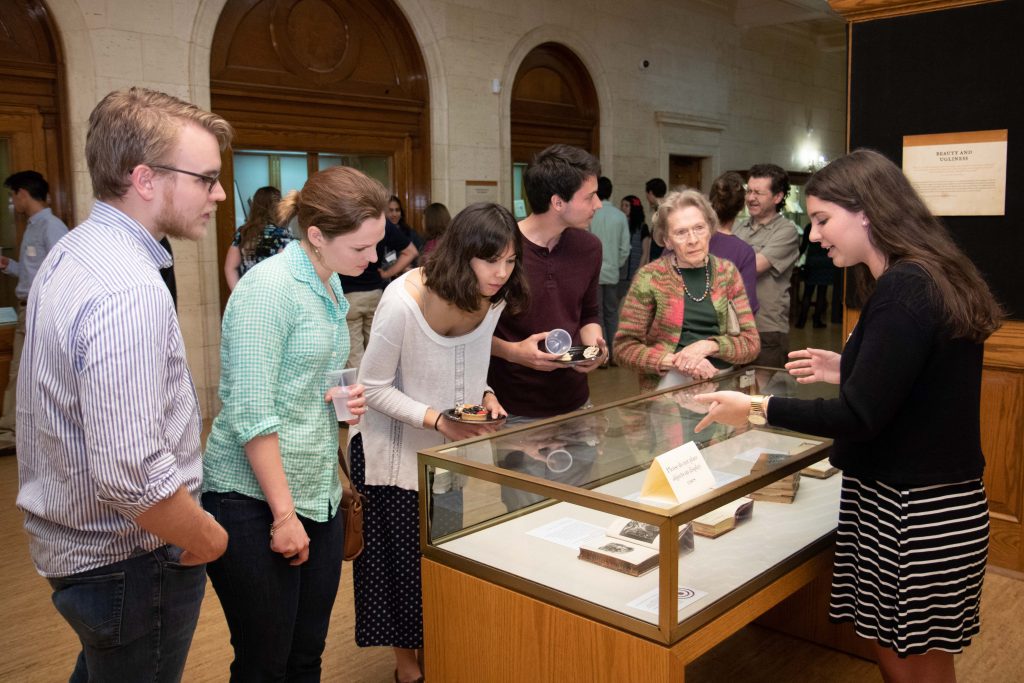 Jeanne Moskal, professor in the English and comparative literature department, says that when she learned Wilson Library was again seeking a partner, “I elbowed my way to the front, because it’s the 200th anniversary of the publication of ‘Frankenstein.’ That anniversary is the most famous thing right now in my area of early 19th-century British literary studies.”

Rare book research librarian Emily Kader says that the program of undergraduate exhibitions allows students not only to conduct original research, but also to showcase their work. “Frankenstein” was a natural fit because of Wilson Library’s outstanding collections of 19th-century British literature.

“This was a chance for the students to go deep while also highlighting a research strength that we have,” says Kader.

Connecting with the text

As students in Moskal’s class immersed themselves in the story of Victor Frankenstein and his creature, they had the experience of working hands-on with the books that informed Shelley and shaped her world view.

First-year student Jacob Katz says that he and his partner, Malaika Swaminathan-Sipp, would come into Wilson Library in their free time to work on the project. “Sometimes we’d get kind of distracted. The books are really amazing.”

“We got to connect with the text on a level that we would not have if we were just reading and discussing it as a class,” says Swaminathan-Sipp, also a first-year. 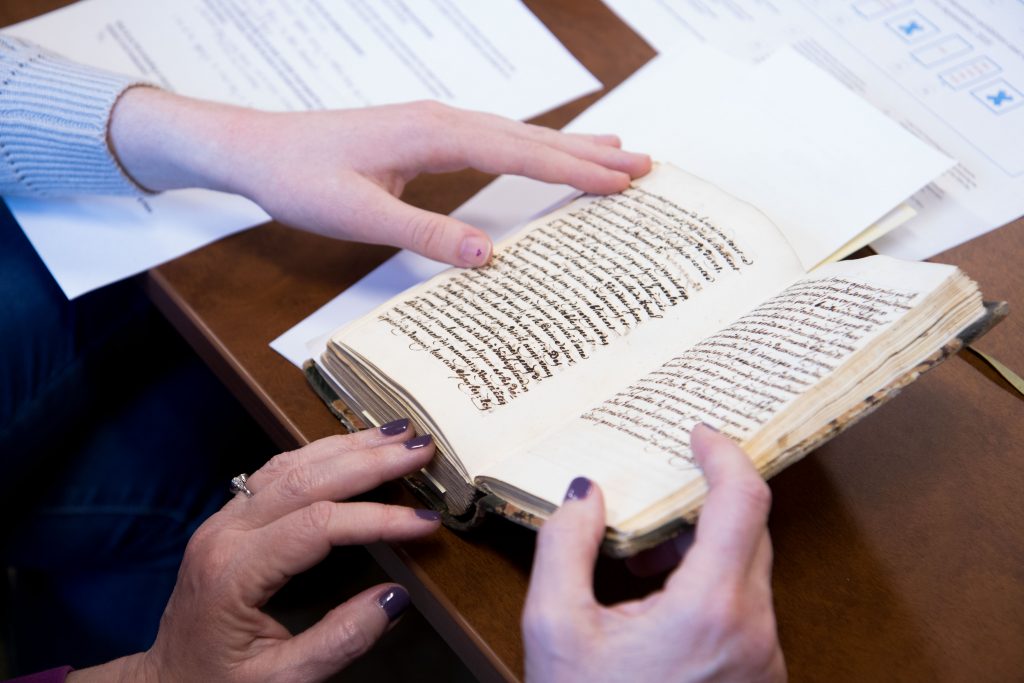 Professor Jeanne Moskal and Madison Boos inspect a book from the Rare Book Collection in Wilson Library for the exhibition “Reconstructing Frankenstein’s Monster.”

For Moskal, that was one of the points she hoped students would take away. “I want to pass on the value of the real material object of the book and an understanding that the people we study were real historical people.”

Over the semester, the students also grew as researchers. Moskal’s syllabus emphasized in-class experience, as the students worked week after week with their selected items and with the Library’s specialists.

Kader and librarian Tommy Nixon guided the students through their research. Interim curator of rare books Elizabeth Ott even procured an 1831 second edition of “Frankenstein” to complement the Rare Book Collection’s first edition.

Conservator Jan Paris evaluated the stability of the books for display, while exhibits preparator Rachel Reynolds helped the students think like curators as they selected items to illustrate their themes. She also taught them how to write effective and informative exhibit labels.

Katz appreciates a class that was like no other he has taken. “First semester freshman year was all study, study, study. This class slows everything down. And once you slow down, you actually have the time to think, to be creative and to be really thorough with all your work.”

Senior Rachel Dango says that it’s “empowering to have the freedom and creativity” to design part of an exhibition. “I thought [librarians] were going to pick what they wanted and we were going to help them write, but it turned out that we were literally picking what we want, designing the cases and implementing them—with a lot of help and feedback.” 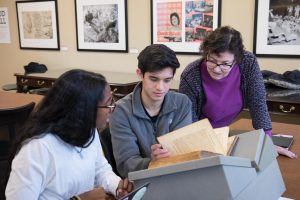 On several occasions, students and professor learned together, as when Moskal called on a colleague to evaluate a handwritten poem tucked inside a book.

“You get to see your professors in a different setting,” says student Blythe Gulley, part of the team that found the poem. “This is a lot of what their research is based on. You’re helping them with really interesting and sometimes groundbreaking stuff.”

Moskal hopes the students come away with the “sense that they can become experts in something and that they have something to contribute to the scholarly community. They have it within them to be the authority, to develop something that’s worth saying, and to say it to people and be understood. That’s just priceless.”

The students all say they would take the class over again and would recommend it to other students.

Katz says that he and Swaminathan-Sipp would sometimes muse on the experience that they were having. “If we went to a different college, we might never have this opportunity. You come to college to make new experiences, to find new opinions. I would never have gotten this experience in any other class.”

Video and photographs by Aleah Howell. Story by Judy Panitch.

“Reconstructing Frankenstein’s Monster: Mary Shelley’s World in Print” will be on view in the Melba Remig Saltarelli Exhibit Room at the Wilson Special Collections Library through August 26, 2018. The exhibition is free and open to the public whenever Wilson Library is open. Additional photographs on the Libraries’ Flickr.
Tagged with: Exhibits, Frankenstein, Mary Shelley, Wilson Special Collections Library