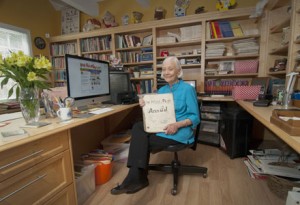 Some people choose their life’s path, others seem to have their paths chosen. So it has been for UNC alumna Betty Debnam ’52, whose strong background in journalism and education first led her towards the world of advertising copyediting and public relations.

But her 12 years in the classroom as an elementary school teacher proved to be the catalyst that would define her life’s work. Always on the lookout for fresh and interesting approaches to her teaching and in deference to her journalistic upbringing, Debnam wanted to get her students reading the newspaper. She was also of the opinion that the newspaper industry should step into elementary education.

“It’s so important for the general public to be informed early on, and at that time, newspapers were the gold standard for information, but the content could be overwhelming and just couldn’t hold kids’ attention,” she said. “I believe that learning should be fun and visual with easy-to-understand material that is informative and brief!”

So Debnam created The Mini Page. Directed to kids but of interest to readers of all ages as well as educators, Debnam’s four-page weekly newspaper feature addressed topics of significance to the elementary curriculum and included features about science, government, animals, hobbies, artists, holidays, biography, geography, history and manners, among others. Recognized for its cast of cute and clever characters purposefully drawn like “…a talented 4-year-old” did it, The Mini Page’s topics were carefully researched, written in an easy-to-understand-style and double-checked by top sources in the country. Each issue also had recipes, super sports and puzzles based on the main theme.

A native of Norfolk, Va., Debnam credits her inspiration for The Mini Page to her family, especially her grandmother, who ran a small weekly newspaper in Snow Hill, N.C. Her grandfather was a school superintendent and edited the newspaper; her father was a newspaper reporter in Norfolk. Her late spouse, retired Marine Col. Richard Morton Hunt, was a former Raleigh News & Observer and Associated Press reporter, lobbyist and military adviser to the late Vice President Hubert Humphrey.

The first issue of The Mini Page ran in the August 29, 1969, issue of the News & Observer. In 1970, The Mini Page was picked up by The Charlotte News and published in both papers. MSC Features, Inc., a national newspaper advertising representative, became the syndicator from 1972 to 1976. National syndication began in July 1977 with Universal Press Syndicate, who purchased The Mini Page and retained members of Debnam’s staff to maintain the publication’s original style.

Appearing in over 500 newspapers weekly, The Mini Page is loved by children, parents, teachers and anyone who wants to learn a little more while having a lot of fun. In her 37 years (1969-2007) as creator, artist and founding editor, Debnam never missed a deadline.

When she decided to step away from the pressure of producing the weekly feature, Debnam wanted to make sure that it would not only live on in syndication, but that its origins would be preserved as well. She gave her complete archive from the years she was creator and editor to the UNC Library in 2012 along with the financial support necessary to create an electronic archive
“Carolina means a great deal to me, and if this work can better inform and help prepare teachers for the classroom and help them command material, then it will have served its purpose well,” she said. “And if we can capture the minds of kids earlier, they will be much better positioned to become the global citizens that they must be to be fulfilled and successful.” 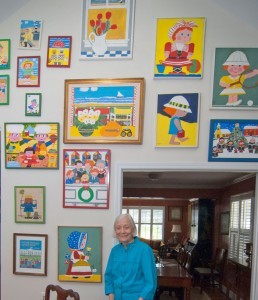 The Mini Page archive is making a difference. It is used nationally as a multipurpose teaching tool addressing everything from U.S. history to endangered species, from good manners to Shakespeare. At UNC, graduate students, with Debnam’s support as well, are using The Mini Page archives in collaboration with the UNC School of Education’s Learn NC program to create and provide a listing of instructional plans using The Mini Page archive in K-12 classrooms. Online courses are also being offered to teachers so they can develop their own curriculum using the archives.

In addition to the archives, Debnam supports the School of Education Foundation, the Southern Historical Collection where The Mini Page archives are housed, and several other philanthropies around the state. She has amassed numerous awards as well, including membership in the N.C. Journalism Hall of Fame (1999); the North Carolina Award for Public Service (2005); the first-ever Lifetime Achievement Award from the Newspaper Association of America; membership in the Halls of Fame of the Newspaper of America Foundation, the Educational Publishers Association, the Newspapers in Education Program and the Education Department of East Carolina University.

Now that Debnam seemingly has more time on her hands, she says she wants to paint more, write children’s books, visit schools to see firsthand what’s being taught and how, spend more time working with various entities across the state that hold special significance for her, and spend more time with her poodle, Andy.