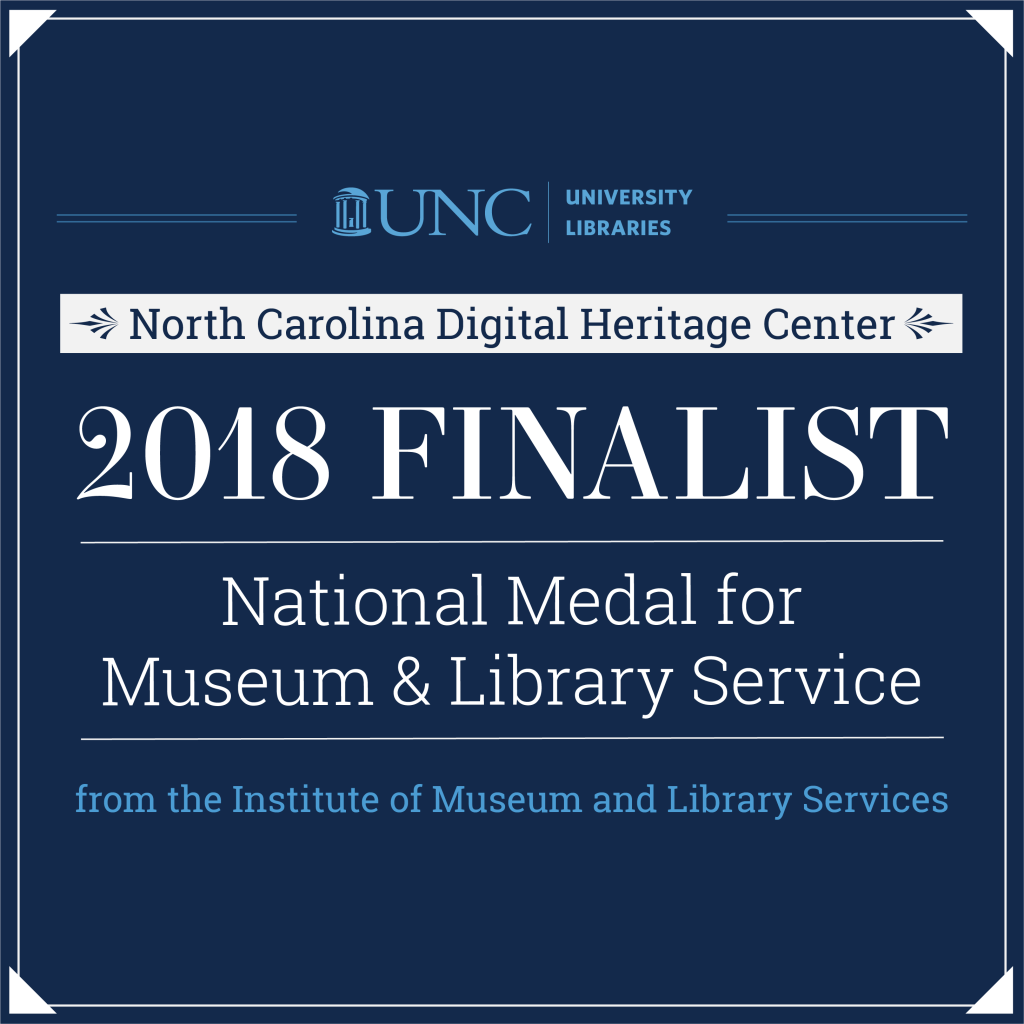 The North Carolina Digital Heritage Center at the University of North Carolina at Chapel Hill Libraries has been named a finalist for the 2018 National Medal for Museum and Library Service.

The medal is the nation’s highest honor given to museums and libraries by the Institute of Museum and Library Services (IMLS). It recognizes exceptional service to the community and honors organizations that make a difference in the lives of individuals, families and communities. IMLS announced 29 finalists for the National Medal on Monday and will name the winners later this spring.

The North Carolina Digital Heritage Center provides digitization services to museums, libraries and archives across North Carolina. Established in 2009, the center has digitized more than 120,000 yearbooks, newspapers, photographs, city directories and other items. Its growing list of partners now numbers 227 institutions in 76 counties. Its website, DigitalNC.org, provides public access to the online collections at no charge.

Elaine Westbrooks, vice provost for University Libraries and University librarian at UNC-Chapel Hill, said that the center embodies the University’s highest ideals for public service. “This effort is genuinely of the public and for the public. It is an honor to work with our partners and, together, to unlock our state’s rich and complex history for discovery, exploration, teaching and enjoyment.”

The center itself is a collaborative effort between Carolina’s University Libraries and the State Library of North Carolina. The State Library supports the center with funds from the Institute of Museum and Library Services under the provisions of the Library Services and Technology Act. The University Libraries operates the center, contributing equipment and expertise built through more than two decades of digitization activity.

Cal Shepard, state librarian of North Carolina, said, “The Digital Heritage Center is an invaluable resource in North Carolina to institutions large and small. They combine statewide leadership with on-site guidance and assistance to ensure that one-of-a-kind resources can be accessed across the state, nation and the world.”

DigitalNC.org now welcomes some 36,000 visitors every month. Genealogists, local history researchers, K-12 students and the interested public are among the site’s most frequent users, said Lisa Gregory, program coordinator for the center.

One factor in the center’s success, said Gregory, is that she and her staff leave it to each contributing institution to select materials that will bring the most value to its local community. The center then does the work of digitizing the items, adding descriptions to make them findable, sharing them through its website and permanently preserving the scanned files.

“Being named a finalist recognizes the collaborative power and reach of North Carolina’s cultural heritage institutions,” said Gregory. “In the end, this nomination is really for every one of our partners and for their commitment to preserving and sharing our collective past.”

On April 11, IMLS and the North Carolina Digital Heritage Center invite supporters to take to social media and express how the center has made a difference for you. Use the hashtags #ShareYourStory and #IMLSmedals and be sure to tag @NCDHC on Twitter, @NCDigitalHeritageCenter on Facebook.