Skip navigation
Home › Wilson News › “The joy is in the going”: Bayard Wootten Photographs North Carolina and the South

“The joy is in the going”: Bayard Wootten Photographs North Carolina and the South 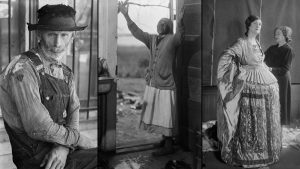 Bayard Wootten was a single mother in 1904 when she borrowed a camera and started taking and selling pictures to support her family.

By the end of her life, she had made more than a million images and had gained a reputation as a true pioneer.

From March 27, 2018 through February 13, 2019, the exhibition “‘The joy is in the going’: Bayard Wootten Photographs North Carolina and the South” will be on view in Wilson Library at the University of North Carolina at Chapel Hill University Libraries. It features twenty-one inkjet prints of Wootten photographs, made by scanning Wootten’s original negatives.

In addition to being one of North Carolina’s most prolific early photographers, Wootten (1875-1959) achieved a number of significant firsts, according to a 2018 New York Times profile that draws on Cotten’s book. After moving to Camp Glenn in Morehead City, she was made “Chief of Publicity,” and became the first woman in the North Carolina National Guard. She may also have been the first woman to take an aerial photograph in America.

Wootten supported herself as a commercial photographer at a time when very few women were either photographers or business owners. From 1928 until she retired in 1954, she operated studios in both Chapel Hill and New Bern, North Carolina.

Wootten is especially known for her “folk study” portraits, including photographs depicting the daily lives of both African-Americans and Caucasian-Americans in rural areas of North Carolina.

The exhibition will feature a number of these photographs, as well as scenes made during her travels around the South. None of the images on view are found in “Light and Air.”

The exhibition title comes from a letter that she wrote when she was in her mid-60s:

“I have always been chasing something. But one of the surprises that life has held for me is that I am happier as an old woman than I ever was as a young one. Perhaps the reason for this is that I realize now it does not matter whether we arrive. The joy is in the going.”

“‘The joy is in the going’: Bayard Wootten Photographs North Carolina and the South” will be on view in the Pleasants Family Assembly Room of Wilson Library, which is frequently used for meetings and programs. Please contact Wilson Library at (919) 962-3765 to confirm availability.

Jerry Cotten and Stephen Fletcher will speak at an exhibition opening on March 27, at 5 p.m., at Wilson Library. Learn more.