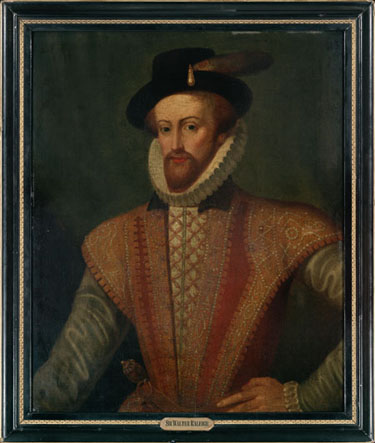 Sir Walter Raleigh, oil on board, circa 1590

This valued part of the North Carolina Collection preserves writings by and about Sir Walter Raleigh as well as writings about English exploration during the Elizabethan era. It includes books, pamphlets, brochures, manuscripts, and audiovisual materials.

The Raleigh Collection’s roots at UNC date back to 1940,when the Roanoke Colony Memorial Association provided funding for the purchase and preservation of materials by and about Sir Walter Raleigh. The organization also donated the books and manuscripts it had collected on Raleigh.

All the materials in the collection are listed in the University Library’s online catalog under the call number prefix CSWR.  Several titles have been scanned and published online.

Who was Sir Walter Raleigh?

Walter Raleigh (1554?-1618) was born in Devon to a family of modest means but good connections. After serving as a mercenary in France while a teenager, Raleigh joined the court of Elizabeth I where he soon became a favorite of the Queen. A position at court opened doors for Raleigh; in 1584 he took over his half brother Humphrey Gilbert’s patent to explore and colonize the east coast of America. Raleigh never traveled to North America himself, but, shortly after gaining the patent, he sent three expeditions to North America. The first, in 1584, was chiefly a reconnaissance mission. The second, in 1585, created a base camp for further exploration. On the final expedition, in 1587, colonists established what was meant to be a permanent settlement on Roanoke Island in present-day North Carolina. The colony failed, and the fate of the colonists remains a mystery. The settlement is known today as “The Lost Colony.”

In addition to explorations of North America, Raleigh also organized several expeditions to South America, specifically Guiana. Raleigh himself sailed on two of these missions. The actions of Raleigh’s crew on his last trip to Guiana proved to be Raleigh’s undoing. Queen Elizabeth had briefly imprisoned Raleigh in 1592 to show her displeasure over Raleigh’s secret marriage. A more serious, long-term imprisonment began in 1603. The new monarch, James I, did not share his subjects’ dislike of Spain, and the new king wanted anti-Spanish adventurers like Raleigh neutralized. Raleigh was arrested, charged with treason, and sentenced to death in December 1603. Raleigh remained imprisoned in the Tower of London until 1616 when he received a reprieve of his sentence. The reprieve was revoked in 1618 when men under Raleigh’s command attacked a Spanish camp during their explorations of the Orinoco River. On the basis of the 1603 treason charge, Raleigh was beheaded on October 29, 1618.