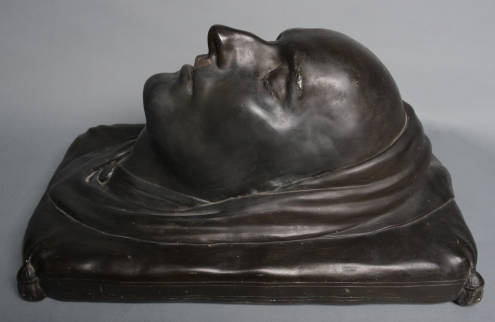 The Emperor in Chapel Hill:
The Death Mask of Napoleon

Affixed in plaster, it is the face of Napoleon Bonaparte — French emperor and conqueror of most of early nineteenth-century Europe. His eyes are closed, lips slightly parted, and his shaven head is tilted backward, resting on a pillow garnished with a tassel at each corner. It is a hollow-cast plaster copy of Napoleon’s death mask, one of the copies made by Francesco Antommarchi, who served as the deposed emperor’s personal physician and constant companion during the last two years of Napoleon’s life. For over a century this particular copy of the mask has been owned the University of North Carolina at Chapel Hill at Chapel Hill. How did this death mask, this final expression of an emperor, find its way to North Carolina?

The history of the original death mask began on May 5, 1821, on St. Helena, a small island located in the Atlantic 1,400 miles off the coast of west Africa. On that day, on that dreary “barren rock,” Napoleon died at the age of 52. He had been exiled there for life and confined on the island by Britain and its allies after his shattering defeat at the Battle of Waterloo in June, 1815. At Napoleon’s death, French and English doctors surrounded his bedside. Among them was Dr. Antommarchi. As was customary upon the passing of a great leader, a death mask or mold of Napoleon’s face was made. A day and a half after his death, a mixture of wax or plaster was carefully placed over the emperor’s face and removed after the form hardened. From this impression, subsequent copies would be cast. Contrary to some accounts of Napoleon’s death, it was not Dr. Antommarchi who made the original mask or so-called “parent mold”; it was the surgeon Francis Burton of Britain’s Sixty-Sixth Regiment at St. Helena. It was Dr. Burton, too, who presided at the emperor’s autopsy. Antommarchi obtained from his English colleagues a secondary plaster mold from Burton’s original cast. With his own mold, Antommarchi later made in France copies of the death mask in both bronze and plaster, one of the latter destined for Chapel Hill.

In 1834, Dr. Antommarchi traveled to the United States, visited New Orleans, and presented that city with a bronze copy of the mask. The French doctor also gave a painted plaster copy of “the grandiose image” to a colleague in New Orleans, Dr. Edwin Smith. Following the death of Dr. Smith, the plaster mask was given to the family of Captain Francis Bryan, a resident of St. Louis, Missouri, and graduate of the University of North Carolina (Class of 1842). In 1894, Bryan donated this mask to his alma mater, expressing his hope that it would be “an object of much interest to the many visitors to the University.”

During its first years in Chapel Hill, Napoleon’s plaster face was displayed as a curio on a table in the office of UNC President George T. Winston. The death mask was later transferred to the university library and ultimately found its way to the library’s North Carolina Collection. Today, the mask remains in remarkably good condition. The only visible damage to it is a chip above the emperor’s upper lip. This damage occurred in 1907, when a janitor at the university overturned the mask while dusting it. On the underside of the mask is the handwritten inscription: “Dr. Edwin B. Smith’s head of Nap.n” and “Presented to Dr. Smith by N[ap’s] Phys’n. Dr.Ant[tommarchi].” Also written on the bottom of the mask is “Tete d’Armee” (Head of the Army), reportedly the last words uttered by Napoleon.

In his own description of the death mask, Dr. Antommarchi remarked that Napoleon’s face appears “relaxed” (recalling that the original cast of the mask was made forty hours after the emperor’s death), but he added that “the mask was correct so far as the shape of the forehead and nose was concerned.” Ah, that nose, that humped, bountiful nose-that is the feature that most impresses this writer when viewing Napoleon’s countenance. Given the size of the proboscis preserved on his death mask, the French emperor certainly should have smelled trouble at Waterloo long before that fateful battle began.