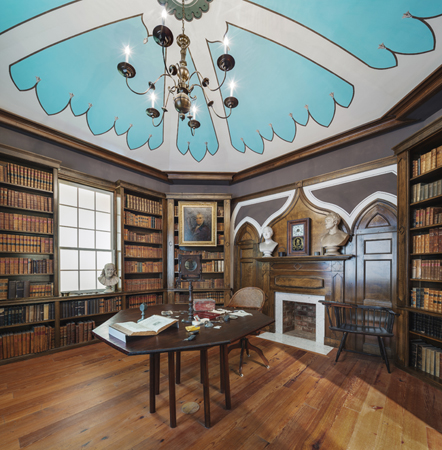 One of the North Carolina Collection Gallery’s historic rooms is a replication of the early nineteenth-century library at Hayes Plantation, which is located in Edenton, in Chowan County, N.C. Displayed here is most of the plantation library’s original collection of books, as well as other furnishings and art works provided to the North Carolina collection by John Gilliam Wood, the present owner of Hayes. The library contains nearly 1,800 volumes, with imprints dating from the late 1500s to the 1860s.

Originally the property of James Cathcart Johnston, the plantation house and its library were built between 1814 and 1817 and were designed by William Nichols, an English architect who later became state architect of North Carolina. Architecturally, the library itself was ahead of its time in the United States, in large part due to its Neo-Gothic elements, a style not widely used in this country until the late 1830s. An adherent to the Palladian school of architecture, Nichols strove for symmetry and balance in form in his designs. This accounts for the repeated use of the octagon in this room. Nichols’ use of angled bookshelves in the library’s corners established an eight-sided room. At the library’s center sits an eight-sided table that has eight legs that are planed on eight sides.

James C. Johnston was one of North Carolina’s most prosperous planters. He inherited his extensive holdings from his influential father, Samuel Johnston, a native of Scotland who had immigrated to North Carolina with his family as a small child. Samuel was very well-connected politically. His uncle was Gabriel Johnston, North Carolina’s royal governor from 1734 to 1752. Later, Samuel served North Carolina in the General Assembly and as state governor himself from 1787 to 1789. Through Samuel and his great-uncle, James inherited his fine collection of books, which he enlarged considerably over the years. In fact, in the decades prior to the Civil War, the collection at Hayes was among the largest libraries in North Carolina.

James never married. Consequently, he made his vast holdings the lifelong focus of his attention, spending most of his time managing and augmenting his father’s estate. By the 1860s, James owned many thousands of acres worked by hundreds of slaves. At his death in 1865, he bequeathed Hayes to a trusted business associate, Edward Wood, whose descendant today remains the owner of the plantation house and its related properties.