Posted on February 3, 2017 by Emily Jack Posted in

During the 1930s photographers Bayard Wootten and Frances Benjamin Johnston each embarked on endeavors to document early Southern architecture. Their separate pathways led to the University of North Carolina Press, which published two very different books of their results. This exhibition featured modern prints made from Wootten and Johnston’s photographic negatives, and examined the stories behind their 1939 and 1941 publications. 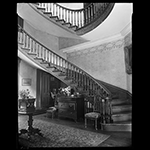