During the late medieval and early modern periods, the Kingdom of France emerged as one of the most powerful states in Europe. More centralized than its German and Italian neighbors, France used the printing press to express a national cultural identity. The printing press provided a tool for grappling with the issues of modernity: it was the agent of the Renaissance and the Reformation, the mouthpiece of France’s colonial expansion across the globe, and the chronicler of innovation in the arts and sciences.

Items in this exhibition are drawn from the Rare Book Collection, reflecting its strong holdings in French imprints. Together, they trace the social, economic, political, and intellectual evolution of France during more than four centuries of printing history. From the fruits of the humanist presses of the 16th century to the mass-market paperbacks of the 20th century, printing technologies advanced in tandem with human creativity. 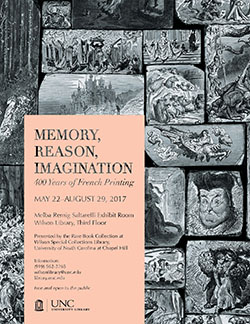