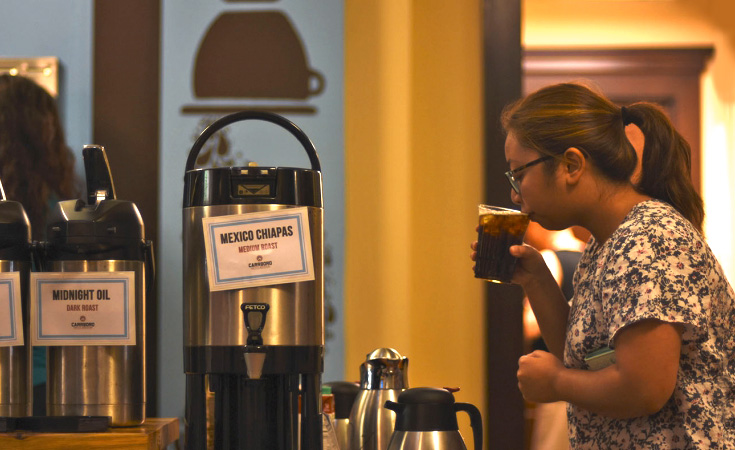 In the summer of 2016, a group of students decided to open a new coffee shop on campus. Of course, starting a company is no small task. Business plans needed to be established and funds needed to be raised, and assistance from the Research Hub played a vital role in the process.

A Data Librarian introduced the students to extensive market reports using the digital repository, Mintel Oxygen. Those reports shaped the students’ proposal and bolstered their fundraising efforts. The Meantime Coffee Company opened in the Campus Y in September 2016.

As an entirely student-run enterprise, Meantime’s student employees gain hands-on experience in fields such as strategic development, accounting, marketing and operations, opportunities not currently offered to students by other on-campus enterprises. All profits are reinvested in students through scholarships and grants. And Meantime supports other student food ventures and local businesses by providing a sales platform on campus.

Meantime has proven itself to be an entrepreneurial success. The company has made more than $100,000 in revenue in just over 5 months, and has provided $11,250 in scholarships in the Spring of 2017. Their partnerships have contributed over $9,000 to other local, campus-serving food ventures. Future plans for Meantime include expanding into on-campus catering.

Students, you never cease to amaze us!