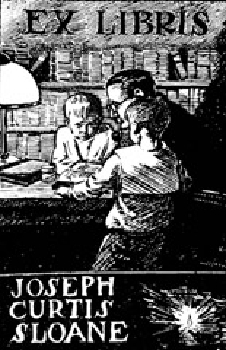 In 1985, the Art Library was named in honor of Dr. Joseph Curtis Sloane, Distinguished Professor of Art at the University of North Carolina at Chapel Hill and Director of the Ackland Art Museum from 1958 to 1978, a period of great growth. During those decades, the museum acquired more than 150 paintings, 100 pieces of sculpture, and 250 drawings. Numerous prints and photographs were added as well. As Chairman of the Department of Art from 1959 to 1974, Dr. Sloane fostered the growth of graduate degree programs, the first major studio (M.F.A.) and art history (Ph.D.) graduate programs in a single department in the Southeast. The strong department and museum teaching collection he built is mirrored in the Sloane Art Library collections.

Born in Pennsylvania, Sloane received his undergraduate and graduate degrees from Princeton University. He was an officer in the U.S. Navy during World War II, served as a curator at the Cooper Union Museum, and taught at Princeton, Rutgers and Bryn Mawr before coming to Chapel Hill in 1959. His specialty was 19th century French painting; among his many publications are French Painting Between the Past and the Present (Princeton University Press, 1951 and 1973) and Paul Marc Joseph Chenevard, Artist of 1848 (UNC Press, 1962.). He also served as the President of the College Art Association from 1956 to 1957 and received numerous awards, including a Fulbright Fellowship, the Jefferson Award, the Alumni Distinguished Professorship, The North Carolina Award (the highest award conferred on a citizen in North Carolina), and an Honorary Doctor of Letters. In the words of a former provost, “he made a lasting impact on the University’s cultural and artistic history.” Philip A. Rees, first librarian of the Sloane Art Library, recalls that Joseph Sloane was always keenly interested in the development of the Art Library, from the time of his arrival in Chapel Hill to the end of his life. Early in his chairmanship, he secured major grants from the University and the Kress Foundation to strengthen the library’s collections, and after his retirement he established and generously endowed a fund to provide added support for library acquisitions. The library is most appropriately named The Joseph Curtis Sloane Art Library.