“Nanduq ershu subat balti nu’u ulap dame labish.” That’s Akkadian for a Babylonian proverb: “The wise man is girded with a festive garment; the fool is clad with a loin-cloth.” 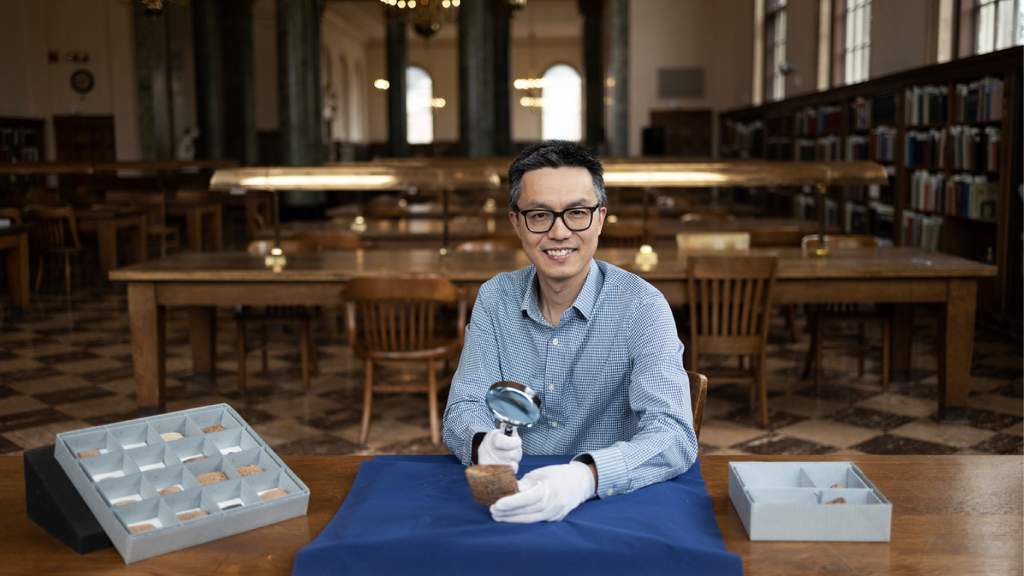 Akkadian is one of the earliest languages known to human history, spoken alongside the even older Sumerian language by the people of Mesopotamia — what’s known today as modern Iraq and the surrounding region — between 2600 and 500 B.C. While it is considered a dead language, specialists like religious studies professor Joseph Lam study and teach it.

In 2019, while teaching Akkadian to one of his classes, Lam remembered reading somewhere that the Rare Book Collection at Wilson Library had a few cuneiform tablets. Similar to hieroglyphs, cuneiform is the writing system used for both Akkadian and Sumerian and was often transcribed onto small, clay slabs the size of a modern e-reader. He worked with librarian Emily Kader to locate the tablets and found more than he expected.

“It was a little bit of a rabbit hole,” he says, chuckling. “When I got the list of tablets the library had, I found some that had never been published.”

One is an administrative record noting the number of workers employed at a millhouse on one particular day around 2000 B.C.; another is a letter documenting merchant dealings and activities.

“Think about what would survive from an average office in modern times,” Lam says. “It’d be mostly receipts and things like that.”

The collection also includes a cone-shaped artifact containing a royal inscription and cylindrical seals used to impress a signature onto a document.

Using 20th-century records about the purchase of these artifacts, Lam tried to track down their origins — and without much luck. The next best option, he felt, was publishing them so that other scholars could study them. But photographing cuneiform tablets is no easy task. Three-dimensional and covered in symbols, they need to be observed with specific lighting and at multiple angles.

“We have an amazing library staff,” Lam says. “They’re not only knowledgeable, but they are committed to supporting the work of this university. At any point when I had a question or needed help, they always came through.