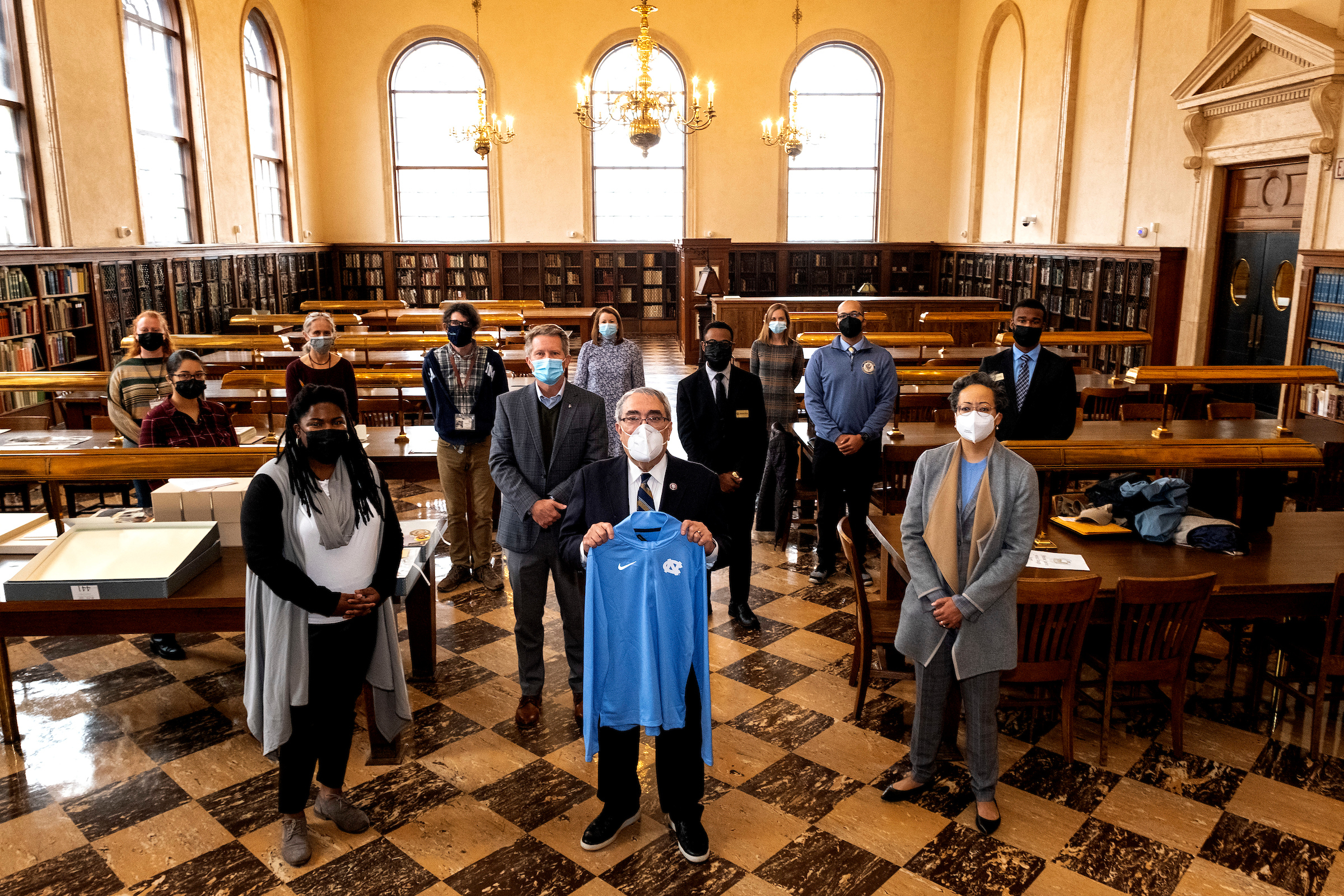 Throughout his life as civil rights activist, lawyer, judge and legislator, U.S. Rep. G.K. Butterfield has always been interested in history. He’s also a self-described “novice archivist” who has accumulated – and carefully labeled – boxes of materials from each chapter of his life.

“I’ve always been history-minded,” Butterfield said. “I’ve accumulated boxes, and I’ve labeled each box.” The result is a wide-ranging collection of papers and photographs from his family in Wilson, North Carolina, and his own career.

“I’m 74 years old, approaching 75 years old, and I know it’s time for me to release this valuable trove of information to somebody who can appreciate it, who can preserve it and share it,” Butterfield said.

Butterfield has represented North Carolina’s 1st Congressional District for nearly two decades and is a past chair of the Congressional Black Caucus. He announced on Nov. 18 that he will retire from Congress at the end of the current term.

Butterfield’s father, G.K. Butterfield Sr., emigrated from Bermuda in 1917, at age 17; later volunteered to serve the United States in World War I as a non-citizen; and then graduated from Shaw University in Raleigh, North Carolina, and Meharry Medical College School of Dentistry in Nashville, Tennessee. He practiced dentistry in Wilson, North Carolina for 50 years; helped found many organizations including the Wilson branch of the NAACP, Men’s Civic Club, and the Old North State Dental Society; and was the first Black person elected to the Wilson City Council.

Butterfield’s mother, Addie Davis, was a native of Wilson County who met Butterfield Sr. while she attended high school, also at Shaw. She was a classroom teacher for 48 years.

After earning his undergraduate and law degrees at North Carolina Central University and serving in the U.S. Army, Butterfield returned to Wilson to open a law practice with his friend Milton F. “Toby” Fitch Jr. and later with James A. Wynn Jr. In the 1980s, Butterfield litigated voting rights cases as cooperating counsel with the NAACP Legal Defense Fund. He was elected superior court judge in November 1988. In 2001, North Carolina Governor Mike Easley appointed Butterfield to the Supreme Court of North Carolina. Then, in 2004, he was elected to Congress to represent the first congressional district.

Butterfield began taking his own photographs and collecting memorabilia during congressional business, including diplomatic trips abroad. “I’m known in Congress as the photographer, particularly in the Congressional Black Caucus,” he said. “I’ve taken over 20,000 pictures. After all of these years, I just had a whole mountain of information.”

Butterfield’s years in Washington allowed him to witness the historic presidency of Barack Obama, the nation’s first Black president. His collection of memorabilia from Obama’s presidency is unique, Powell said. 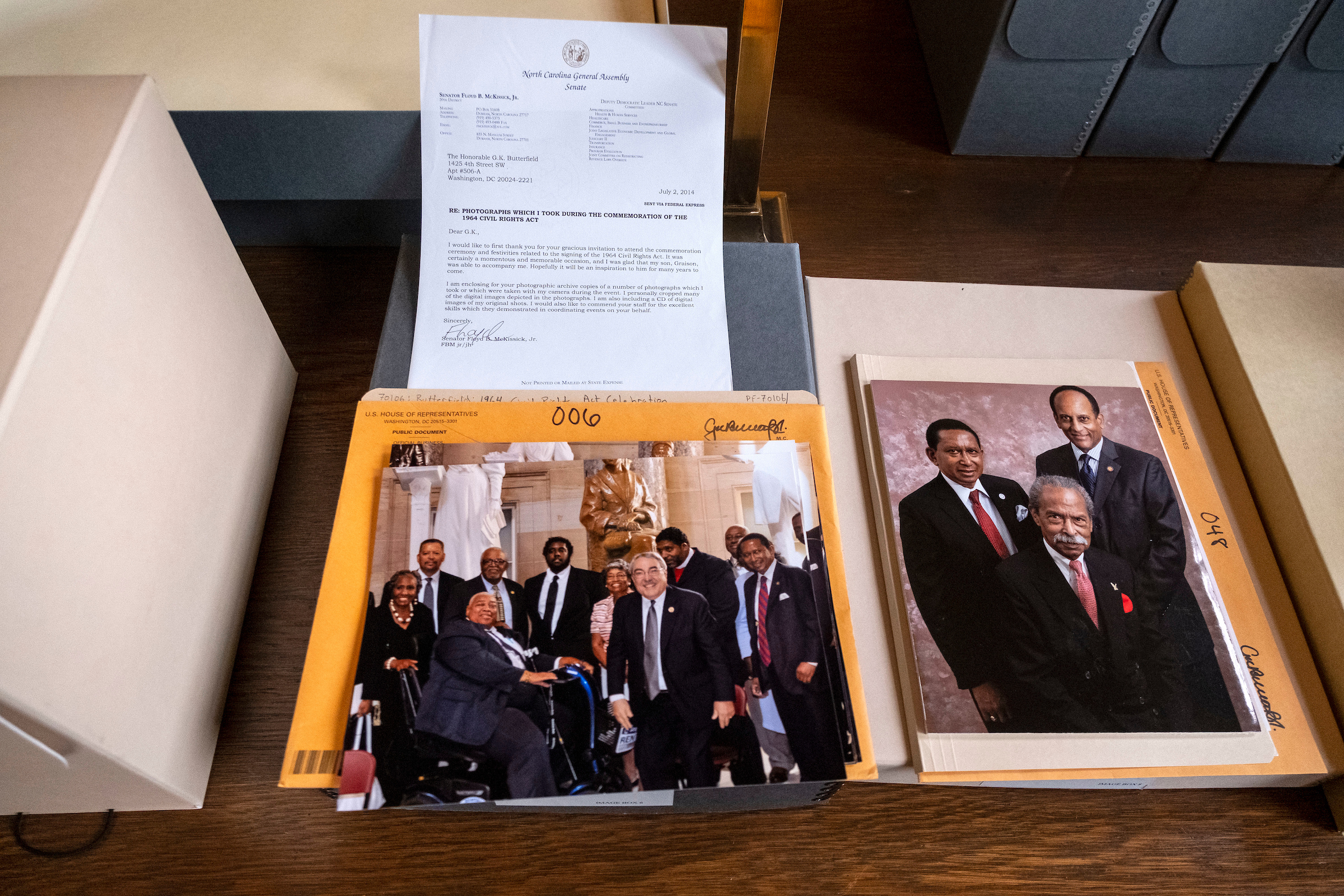 “Butterfield had the idea to get President Obama’s autograph whenever they were together at important events, including State of the Union addresses, and funerals of important figures such as the Rev. Clementa Pinckney,” said Powell. “It may be too early to examine President Obama’s legacy, but G.K. Butterfield chose to document it, taking his own photographs and collecting materials. It’s fascinating to see this perspective on a historic presidency, all eight years of it.”

“The material that Rep. Butterfield is donating includes the history of Wilson, North Carolina, especially the evolution of Wilson’s Black community,” Graham said. “He has materials from his legal career where he worked on important voting rights cases in North Carolina.”

Butterfield’s materials will join other congressional papers collected at Wilson Library, Graham continued. “Documenting and preserving North Carolina and national politics is an area of focus for our collection. Congressman Butterfield’s materials lend a distinctive viewpoint, a distinctive perspective. I think that they’ll find a research community and students and faculty who are eager to dive into them from day one.”

Butterfield said he is pleased to know that his collection will be well taken care of and will be made available to anyone who might benefit from it. His physical and digital assets will contribute to the African American Family Documentation Initiative at the Southern Historical Collection and will complement oral traditions in the community.

“History in the African American community is very rich, but it needs to be preserved,” he said. “Those of us who possess these nuggets of history will be silenced one day, and unless we pass it along, and in an appropriate medium, it will be forever lost. We won’t be able to preserve all of them, but we can certainly preserve as many as we can capture.”