Laying the cornerstone of a civil society 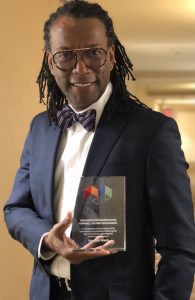 Kenneth Ward ’84 knows the power of education. As executive director of College Bound—a Washington, D.C., nonprofit that prepares public and public charter school students to graduate from college—Ward is committed to ensuring that young people achieve a college education and realize their personal and professional goals.

Ward’s Carolina education put him on the path to achieving his own objectives. “I benefited greatly from the University, which I attended on a full academic scholarship,” he says. “One of the things at the center of my UNC experience was the Undergraduate Library.”

Ward talks about the culture of meeting friends at the library, both for studying and socializing. “The library was a safe place where we had conversations about myriad topics and were allowed to build relationships and be ourselves,” he says. “I have such great memories of the stacks at Wilson, both of the solitude and of being surrounded by so many volumes of books.”

Because the University Libraries has been such a special part of Ward’s experience, he is both a member of its Friends of the Library Board of Directors and a consistent donor to the University Libraries. “I have a responsibility to give back and to model philanthropy and community involvement for the young people in my life,” he says. “I try to be very intentional about where I give. I know that every gift to the Library is well spent and well invested.”

The visionary leadership of Elaine L. Westbrooks, vice provost for University Libraries and University librarian, inspires Ward’s confidence that his gifts are well stewarded. “I’m enthralled with Elaine Westbrooks and the work she’s doing at Carolina,” he says, citing as one example the University Libraries’ Reckoning Initiative which uses equity, inclusion and social justice as a lens for all the Library’s work.

“History for all people hasn’t been captured accurately and the Library has the power to change the story being told,” Ward says. “I am descended from enslaved Africans for whom it was against the law to read. At an early age, my family gave me books and instilled in me the power of reading. I always gravitate toward books because there is so much information within their covers that is life changing.”

Ward encourages everyone who knows the power of books and libraries to donate to the University Libraries. “People often think that they don’t have enough money to give or that what they give won’t make a difference,” says Ward. “I’m certainly not a multimillionaire but the small amount that I give coupled with other like-minded people makes a huge difference. It’s important to give what you can and where you can. The University Libraries, which helps shape society, is a great place to give.”