5 Questions with the Authors of “UNC A to Z” 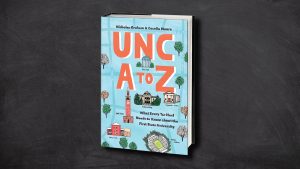 In April 2020, UNC Press published “UNC A to Z: What Every Tar Heel Needs to Know about the First State University,” written by the University Libraries’ own University Archivist Nicholas Graham and former university historian Cecelia Moore. The illustrated book contains 350 entries covering the people, places and events that have made Carolina what it is.

Graham and Moore recently answered five questions about the book, from their favorite entries to the things that most surprised them.

What inspired the book?

Nick: Through my work in Wilson Library, I had long felt the need for a reference book that covered the basics of UNC history. Things like building namesakes, organizations and significant events. I was inspired in part by William S. Powell’s North Carolina reference works, and also by the many resources compiled by Library staff over the years.

Cecelia: I had encountered UNC history questions throughout my time at Carolina at Playmakers, in University Development and especially in the Chancellor’s Office where the question was often related to current events. The published histories of UNC are old and do not provide a quick, short answer to a query. The popularity of “The Carolina Story” (which is also dated) suggested that people would welcome a reference book like this. Indeed, it was a book that I could have used quite a bit.

Did you encounter any surprises in your research?

Nick: I continue to be surprised and inspired by the work of student activists. So many of the significant changes on our campus in the 20th century came about because students were willing to speak out and challenge the administration, often at great personal risk.

I was also surprised by how many major musical acts performed on campus over the years: Louis Armstrong, Benny Goodman and other major jazz acts played dances in the 1940s; Chuck Berry, Muddy Waters and the Allman Brothers, among others, played at the Jubilee festivals; and the 1980s saw lots of big concerts on campus: Prince played in Carmichael, the Grateful Dead and many others played the Dean Dome and U2 had a concert at Kenan Stadium.

Cecelia: One thing that surprised me was how often leaders changed the “front” of the campus. The historical campus looks like it was always planned to look that way, but once you dig a little deeper and look more closely, you find that they started out with the campus facing east to greet visitors coming from Raleigh, then changed it to the north, then back to the east which is why Playmakers Theatre faces that way, and then later to the south. Buildings like New East and New West were built with the front door on the north, and now those entrances are on the south.

What’s one Carolina story you think should be more well-known?

Nick: I think more people should know about the history and role of slavery at the University. Many people are aware that enslaved laborers helped to build all of the early campus buildings, but there is so much more to the story, especially around the financing of the University.

Cecelia: I think we could all learn more about how UNC’s history is part of the histories of Chapel Hill, Carrboro and Orange County. There are multiple generations of families in the area who shaped both the University and their communities.

What’s the relationship between the book and the companion website?

Cecelia and Nick: As we worked on the book, UNC Press editors decided they wanted to use it to develop a digital component. They collaborated with the Digital Innovation Lab in the College of Arts and Sciences. The site currently includes all of the entries in the print book, and we are exploring the possibility of updating entries on the site as necessary.

What are some of your favorite entries in the book?

Nick: I really enjoyed learning about and writing about some of the student traditions over the years, especially those that aren’t around anymore, like the Cake Race or the Cardboard Club. The dramatic change in campus life and culture in the late 1960s and early 1970s brought even more unusual traditions and events, like the Invisible University of North Carolina, High Noon and the brief but popular trend of mass streaking on campus.

Cecelia: Even though we didn’t do an entry for every academic department, we did write about one of my favorites – the Department of Radio, Television, and Motion Pictures (RTVMP). It was split up in the 1990s, but RTVMP was the birthplace for WUNC-FM and UNC-TV. Another favorite for me is the one on utilities. I think it is fascinating to learn how a campus that started in the 18th century eventually built in plumbing, electricity, etc.