Don’t miss the first-ever screenings of two newly-preserved films that document some of North Carolina’s most recognizable folk traditions. This two-part series of virtual film screenings looks at the family-run potteries of the eastern Piedmont and the renowned old-time music of Surry County. The University Libraries has recently preserved both films thanks to a grant from the National Film Preservation Foundation, which supports the University Libraries in preserving and sharing these audio-visual records of the state’s heritage. 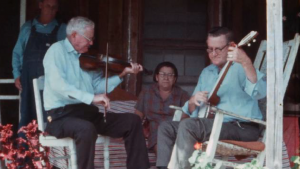 Jarrell and Cockerham were influential figures in the old-time scene: Jarrell won a National Heritage Fellow Award, and Cockerham’s banjo is in the Smithsonian’s National Museum of American History.

Following the screening, musician, producer and radio host Ivy Sheppard will discuss the film and offer a live demonstration of the old-time music styles of Surry County, North Carolina. 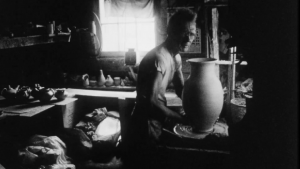 On October 6, we’ll screen “A.R. Cole, Potter,” a 1969 film by then-student filmmaker Terry W. Rushin. The documentary shares a day in the life of ceramicist and potter A.R. Cole and his family’s multi-generational pottery shop in Sanford, North Carolina.

Following the screening, Hunter Randolph, a UNC-Chapel Hill student with close ties to the Cole family’s pottery shop, will discuss the eastern Piedmont’s ceramic arts traditions. Randolph will share his own short film, “Stories in the Clay: The Pottery and Poetry of Neolia Cole Womack,” a charming and amusing look at the work of A.R. Cole’s daughter Neolia, who “probably wrote more on the bottom of pottery than anyone else.”

Learn more about the preservation grant and the films on the Southern Folklife Collection’s blog, Field Trip South.