“Climbing the Hill: Women in the History of UNC” focuses on women’s experiences at Carolina, covering a range of intersectional topics, including sexuality, race and age. The exhibition’s timeline begins before the admittance of the first female student, Mary McRae, in 1897, with artifacts including a dance card that men used to record their dance partners’ names when attending balls.

Not only does the exhibition encompass the lives of women who lived on the Carolina campus, but it also looks at faculty, staff and the surrounding community. An example of this scope is a selection of books published by a 1970s and 1980s Carrboro-based children’s literature publishing company called Lollipop Power, Inc. The female-owned company sought to include topics surrounding diversity, language barriers, sexual assault and an array of subject matter that was not commonly addressed in children’s books.

Photographs compiled by student Louise Davis depict student life on the campus from the perspective of a woman in a predominately male environment. Subjects include campus buildings, students and campus life at the University. (Louise Davis Photographs, 1930s-1960s, University Archives, Wilson Library) 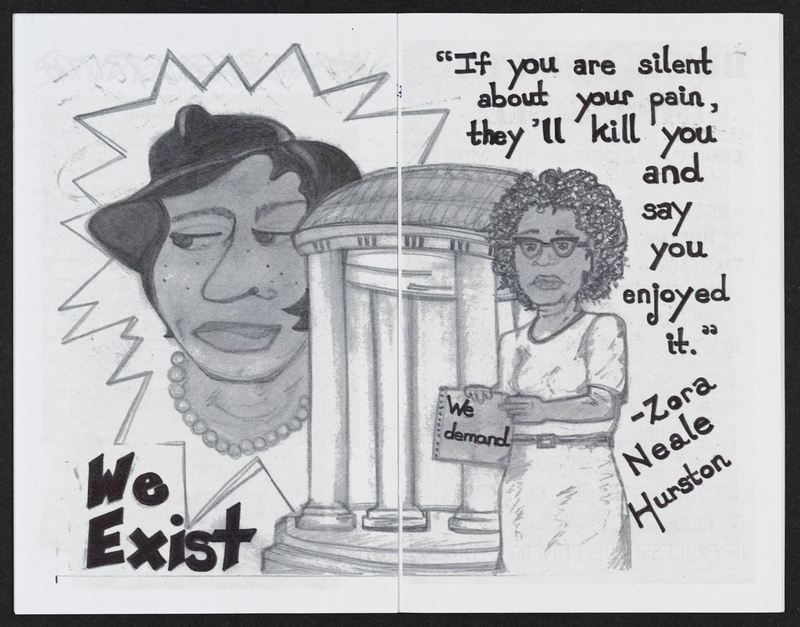 Illustration of Zora Neale Hurston in Ruptures, a zine produced by FLOCK collective in 2017 about the fight for Hurston Hall. (North Carolina Collection, Wilson Library)

Originally, the majority of the exhibition was meant to be a physical display with an online component, but the global pandemic brought the sudden closure of campus library buildings.

“Our timeline was almost instantly crunched,” said Rachel Reynolds, special collections exhibitions coordinator in the Wilson Special Collections Library. “We essentially had three days to scan everything whereas we [normally] would’ve had a month.”

Despite these difficulties, the exhibition team was able to digitize about 90% of the planned exhibition content before leaving the building to work remotely. As for the remainder of the items, Sarah Carrier, North Carolina research and instructional librarian, did some creative problem-solving. One example was approaching students who had taken photos on their phones during their research and using those images as substitutes in the online exhibition. Additionally, a significant amount of the material needed could be found in the University Libraries’ digital repositories. With the information compiled, graduate student and Humanities for the Public Good Fellow Lara Lookabaugh worked to create the website to house all of these artifacts.

This collection of artifacts illustrates the progress the University has made since allowing women to attend Carolina and the work that has yet to be done. Reynolds summarized this concept: “One of the questions this whole exhibition asks is, ‘How much has really improved for women?’ I think in some cases, it has improved a lot, [but] there are still some barriers . . . It’s not like it’s this rosy picture of a linear progression for women. Certainly there was a long way to go from the beginning and we’re still on that journey . . . There are still spaces that are not safe for women. It’s an ongoing story.”

The exhibition is now online.

Story by Halsey Ziglar, class of ’23