Scholarly publishing at the tipping point

Sustainable, affordable, open, transparent
Carolina and its libraries are on the front lines of an effort to transform how research is published and shared.

Christopher Nelson simply took matters into his own hands.

Cultural Anthropology, the journal the UNC-Chapel Hill associate professor of anthropology edits with two other faculty members, could be accessed only via a subscription fee paid to Wiley-Blackwell, one of world’s five major publishers of academic journals.

Nelson and the other editors, from MIT and William and Mary, wanted their journal to become what’s known as open access, meaning freely available online to anyone. They would simply publish it themselves.

“We asked the American Anthropological Association for help and had them work with Wiley to let us do it,” Nelson said. “We do just about everything ourselves,” including recruiting faculty from various universities to dissect and comment on articles proposed for the journal, a process called peer review. The editors get support from the association, the Society for Cultural Anthropology and other sources for the costs of publishing.

Nelson’s trajectory is still a rarity. Academic journals are how scholars worldwide share results of their research, and most lie behind steep paywalls. Only researchers at institutions with costly subscriptions can get to them. Buying the subscriptions–and coping with their ever-increasing costs–falls to university libraries.

“I want to do what’s best for this campus,” said Elaine Westbrooks, Carolina’s vice provost for University Libraries and University Librarian. “I would love to be able to purchase all the scholarly journals that our faculty and students need.”

However, Westbrooks wrote in a statement in March, “Renewing these packages is unaffordable and unsustainable. Rather than curbing runaway costs, renewing will increase them.”

Seventy-three percent of the Library materials budget goes for subscriptions, and the vast majority of those are for academic journals, which cost millions, said Nerea Llamas, associate University librarian for collections strategy and services. Journal costs rise 4 to 6 percent a year. “It’s a cost that has increased steadily over the years,” Llamas said, outpacing both inflation and university budgets.

Last year, the University Libraries paid Elsevier, a Dutch company, $2.49 million for its package. This year the cost was $2.6 million – a 4.5% increase for the exact same package.

The Library is in negotiations with several publishers including Elsevier, the world’s largest publisher of scientific information. Nothing has been decided; talks could continue into early 2020.

In February, the University of California system, one of the country’s largest research entities, canceled its $50 million subscription with Elsevier, a move that most librarians had previously considered unthinkable.

“UC helped expose the runaway journal costs that are breaking university and library budgets everywhere,” Westbrooks said. “Moreover, UC tied its negotiations to systemic reform: the need to increase open access to research, rather than locking it behind steep and rising paywalls.” 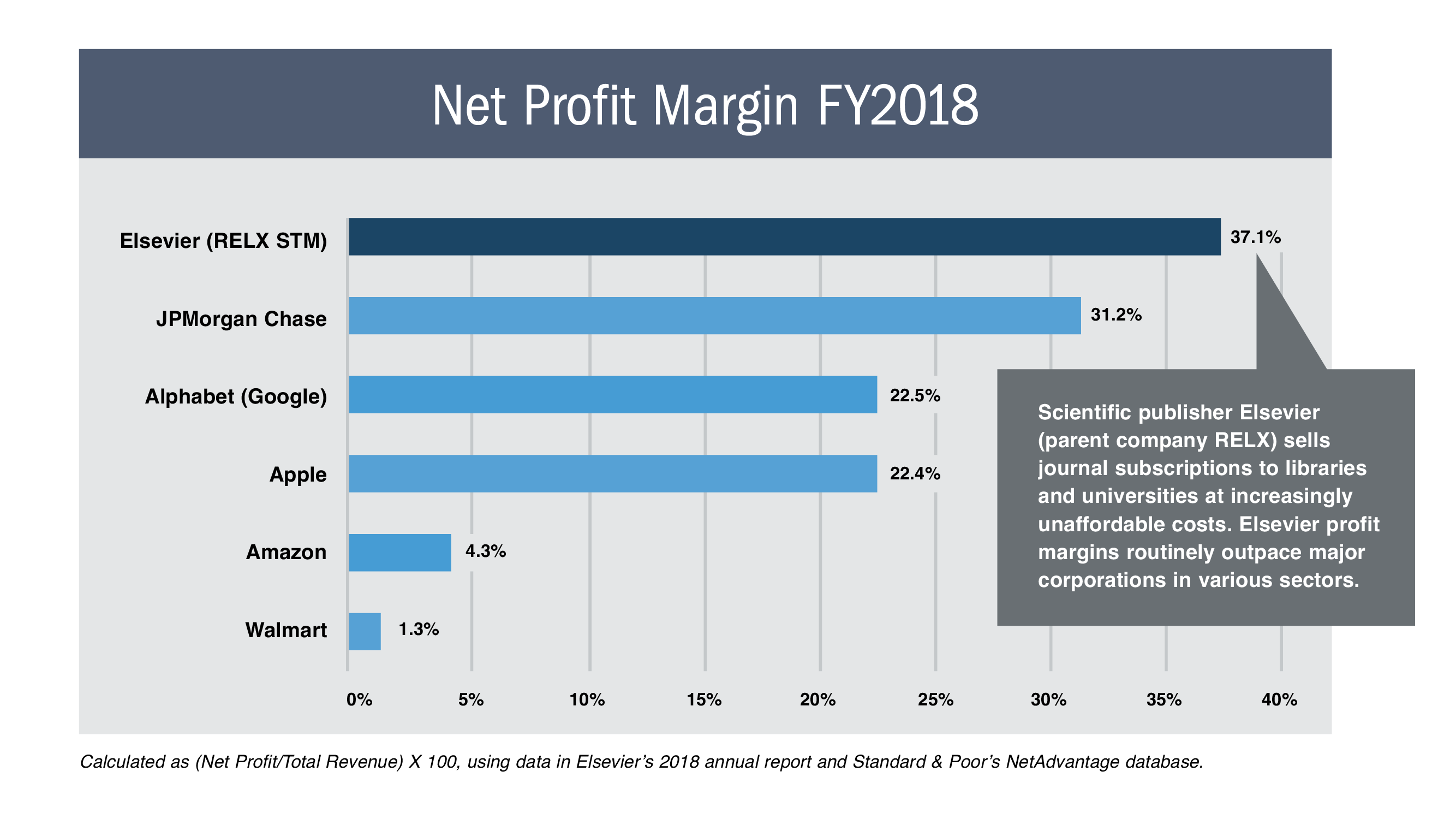 For publishers, the current model is a profitable one.

Elsevier made $1.17 billion in publishing in 2017, The Atlantic magazine reported in March. According to a 2017 issue of the Guardian newspaper, in 2012 and 2013, Elsevier posted profit margins of 40 percent, far in excess of most Fortune 500 companies.

The University Libraries recently stopped subscribing to a prepackaged bundle of journals published by New Jersey-based Wiley-Blackwell, choosing instead to subscribe only to the most important individual titles while dropping others.

“Prices and inflation rates constantly increase to ensure that publishers maintain their income,” said Llamas. “But our budget does not increase every year. To keep up, we’ve had no choice but to cut back.” 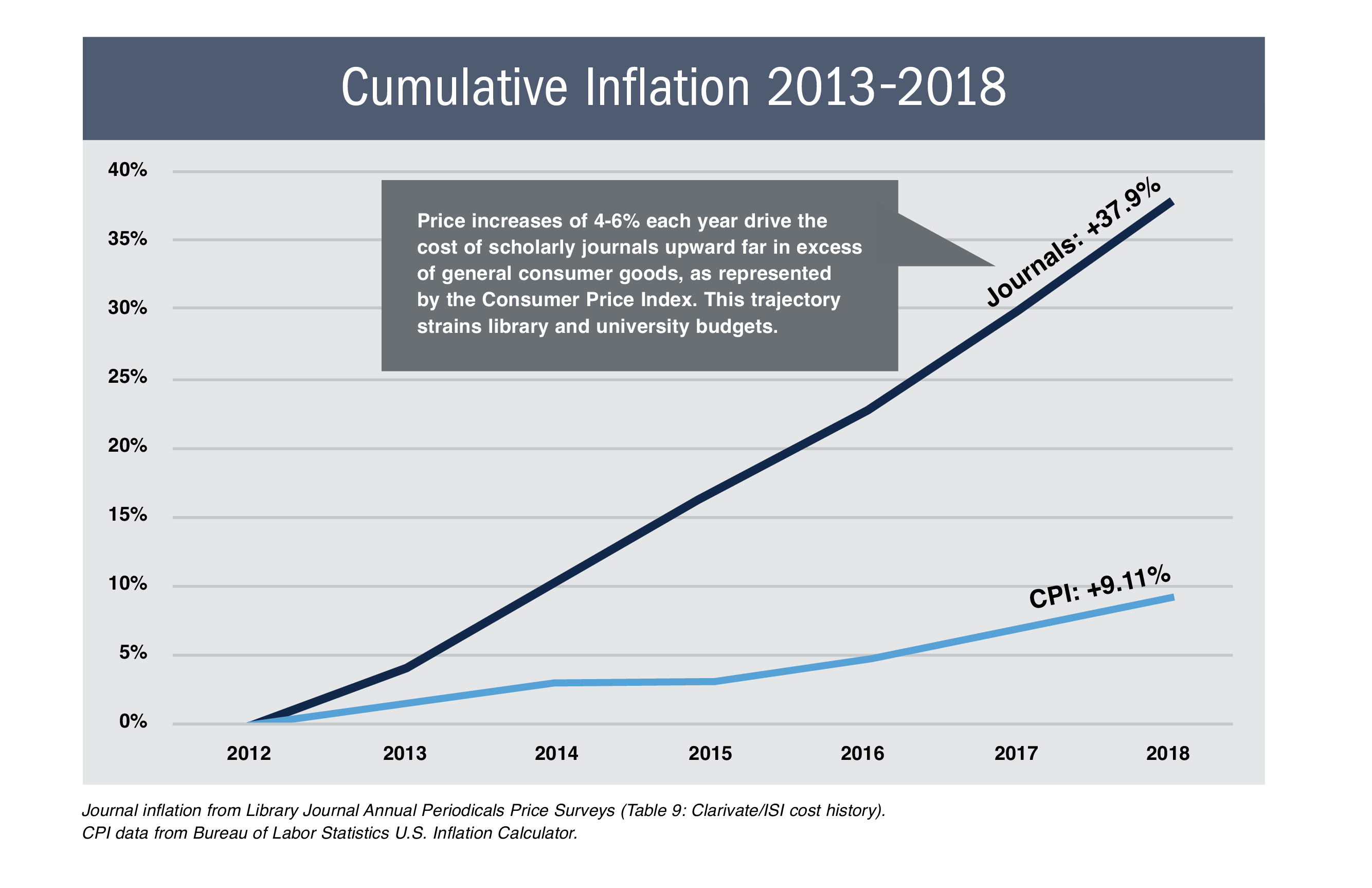 Critics say journal publishers have a sweet deal. Faculty know their career advancement depends on publishing in leading journals. Not only do faculty members research and write at no charge to the publisher, but they also edit and peer review articles, generally without compensation.

“Then the publisher charges the university millions to access that article,” Westbrooks said.

Toward an open future

But cutting subscriptions is not the only option librarians are pursuing. Westbrooks said the Library’s goals in negotiating with publishers are fourfold: affordability, sustainability, openness and transparency. The goal is not simply to contain costs, but to transform the entire system by which scholars share new knowledge and to reimagine the role that libraries and universities play in the scholarly ecosystem.

Westbrooks said the number of open access journals grows annually, and that there are now many reputable peer-reviewed titles: “The whole idea that open access is not quality is a mischaracterization and a myth.”

In some cases, scholars will pay journals for the cost of publishing their articles so that they are open to the world. Charges range from less than $100 to several thousand. These fees might be rolled into a grant, paid out of pocket or covered through an agreement between a library and a publisher as part of a more traditional subscription contract.

“If I pay for an article I publish under may name, I own that article,” said Joseph Piven, a UNC-Chapel Hill distinguished professor of psychiatry and editor of the open access Journal of Neurodevelopmental Disorders. “I can put it on my website. It’s a much better system than we currently have.” 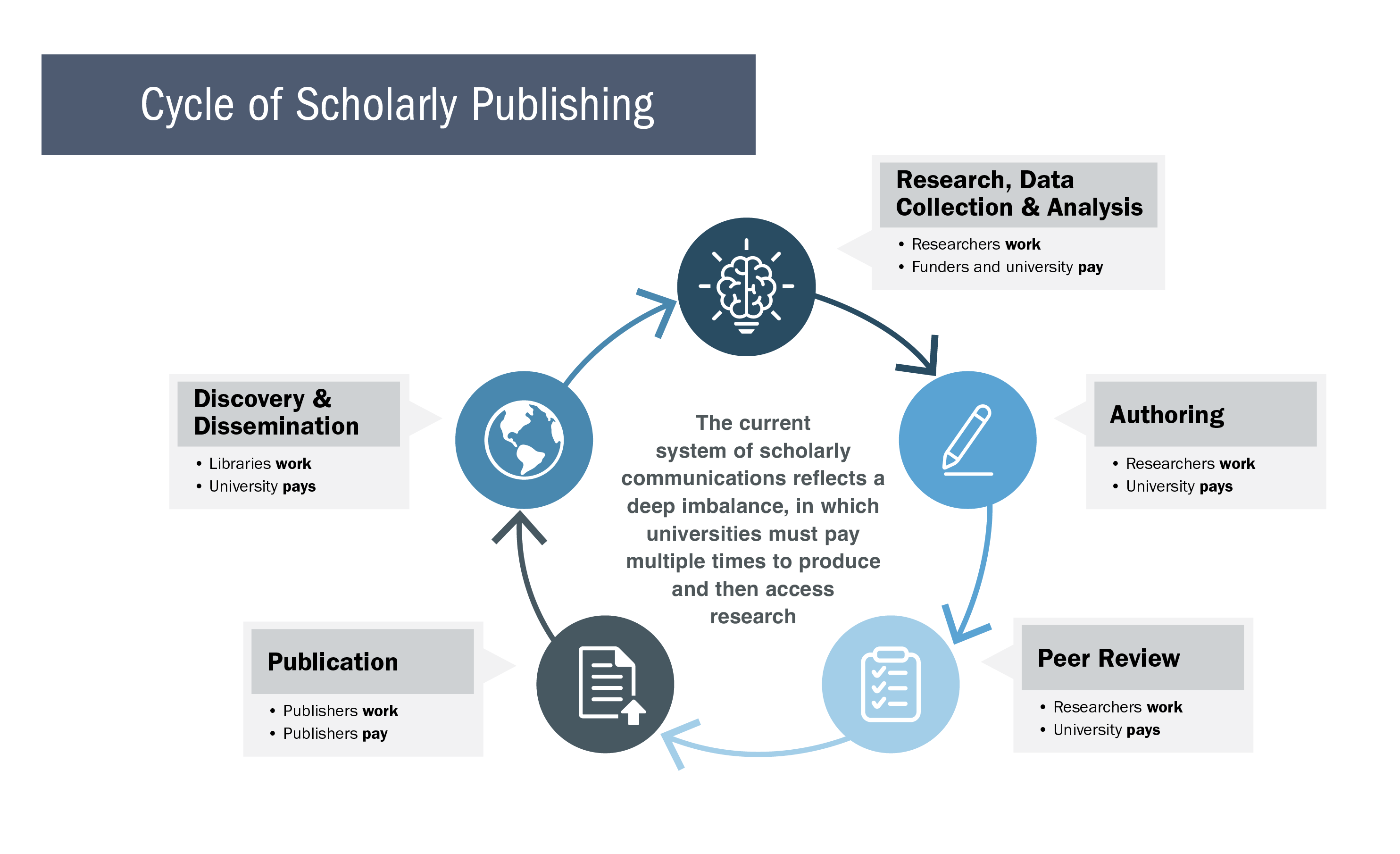 Nelson, the associate professor of anthropology, reads some journals accessed through the Library’s subscriptions.

“I’m happy to be able to get them,” he said. “But frankly, if the University would say we’re not going to do this anymore, I’m all for breaking our relationship with them and thinking of better ways to use our money.”

Faculty leadership agrees. This year, the Faculty Council resolved “to work with the University Libraries to support open access, affordability and transparency in scholarly publishing …”

Westbrooks has been meeting with administrators, deans and faculty about the conundrum and about ways to move forward.

“Some faculty voice deep concern about not being able to instantly access whatever they want,” she said. The Library is working on arrangements with peers and publishers that can reduce or even eliminate delays, including for items that are not part of UNC-Chapel Hill’s current subscription packages.

At the same time, Westbrooks added, “I’ve heard from many faculty who said, ‘This is wrong. We cannot keep doing this.’ “

One issue in the debate involves people far from university centers and those in developing nations.

“Many people are not connected to a University and therefore don’t have access to all the journals most academics use,” Piven said. “This includes parents of patients, patients themselves or (people) participating in research. It includes people … in countries that don’t have fancy university libraries. None of those people can get access to scientific articles. But if the article is in an open access journal, they can get it.”

Westbrooks said everyone should be able to read the journals and the research that originates at UNC-Chapel Hill. It’s simply part of the University’s DNA and its commitment to be “of the public and for the public.”

“We believe that the scholarship of this university should be open to the world,” she said. “We’re here to illuminate humanity and to advance science. If you’re behind a pay wall, and only people at a university can get access to what you’ve written, that’s unfair.

At Carolina, she said, “We are proponents of open scholarship and open science. We could solve grand challenges of the day if more people had access to research.”