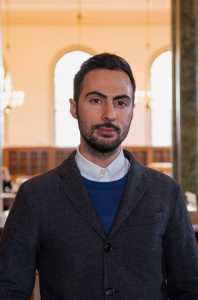 The University Libraries is pleased to announce the appointment of Rustin Zarkar as Middle East and Islamic studies librarian, effective January 6.

Rustin will advance the study of the Middle East and Islam at UNC-Chapel Hill by leading and expanding the University Libraries’ research partnerships with faculty and scholars; supporting teaching and learning; and developing research collections and outreach programs. He will also collaborate with Duke University Libraries to cooperatively develop Middle East and Islamic studies collections.

Prior to this appointment, Rustin was a course instructor at New York University. Rustin is the co-founder and co-editor of Ajam Media Collective—an online space documenting cultural, social and political trends in Iran, Central Asia and the Caucasus. He is also the co-founder and co-producer for Mehelle—a multimedia resource that preserves the sights, sounds and memories of rapidly-changing neighborhoods in the Caucasus.