We are saddened to share word of the death of Dr. Joe A Hewitt, who served as University Librarian at Carolina from 1993 until his retirement in 2004. The following obituary appeared in newspapers on April 21, 2019.

In accordance with Dr. Hewitt’s wishes, there will be no public memorial service. However, he will be remembered at a service for his beloved wife, best friend and creative partner, Susan K. Nutter, on Friday, May 31 at 10:30 a.m. at the the James B. Hunt Jr. Library at North Carolina State University. All are welcome to attend.

We invite you to share your memories of Dr. Hewitt in the comments below. The family has asked that memorials in Dr. Hewitt’s memory be made to the Joe A. Hewitt Librarian’s Opportunity Fund at the University Libraries. 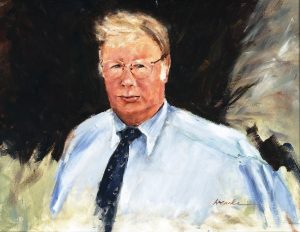 Dr. Joe Hewitt, University Librarian Emeritus at the University of North Carolina at Chapel Hill, died in Durham on December 19, 2018.

Dr. Joe A. Hewitt, University Librarian Emeritus at the University of North Carolina at Chapel Hill, died at home in Durham on December 19, 2018. Hewitt—known widely to colleagues and acquaintances as Dr. Hewitt—was born on October 13, 1938, to the late Joe Anderson Hewitt, Sr. and Betty Plyler Hewitt in Newton, North Carolina. The family moved to Shelby, North Carolina, when he was 7 years old and he always considered Shelby his hometown.

Dr. Hewitt’s beloved wife and best friend, Susan K. Nutter, of Durham, followed him in death on March 25, 2019. He is survived by his son, Stephen Hewitt of Chapel Hill. Also surviving are his sisters Nancy Stallings and Mary Goodwin and brother-in-law Andy Goodwin, all of Shelby, and his ex-wife Anne Hewitt of Chapel Hill. He is also survived by sister-in-law and brother-in-law Deborah Winslow Nutter and Alan Huntington Rutan of South Dartmouth, Massachusetts. He leaves behind nieces and nephews around the country. He was predeceased by his daughter Kirsten Elizabeth Hewitt.

Dr. Hewitt graduated from Shelby High School in 1956 and enrolled in the University of North Carolina at Chapel Hill as a Morehead Scholar. After his sophomore year, he interrupted his studies to enlist in the U.S. Army Security Agency. He graduated from the Russian program at the Army Language School in Monterey, California (now the Defense Language Institute), before being posted to Lubeck, West Germany, where he worked as a Russian voice intercept operator.

In Lubeck, he joined a spirited and talented group of young linguists, most intercept operators and direction finders, on the front lines of the Cold War at a time of high international tension. They worked on the border of East and West Germany, where they developed close bonds as they pursued their passion for German entertainment, drink and culture. In later years, they established the Lubeck Association to hold reunions and maintain cherished connections. 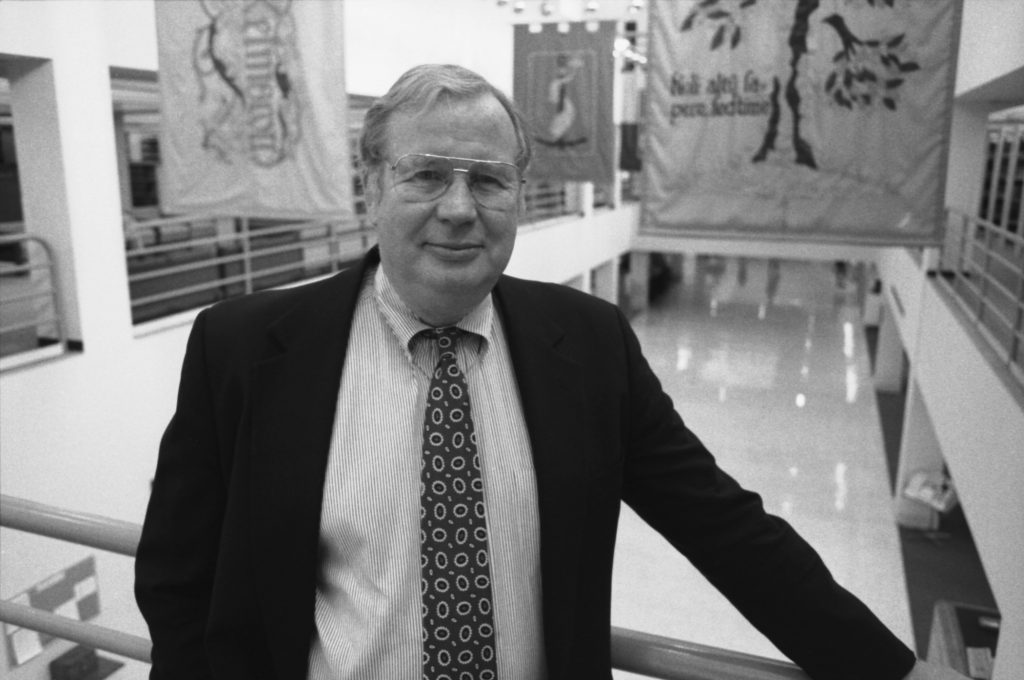 He took his discharge from active service in Germany and traveled in Europe before returning to UNC to resume his studies. Back in Chapel Hill, he took a student job in Wilson Library, assisting in Slavic acquisitions. Encouraged and mentored by the professional staff, he gained an appreciation for the mission of a major academic research library. After receiving his B.A. in history, he enrolled in the School of Information and Library Science (SILS) and commenced a long and distinguished career.

Dr. Hewitt believed deeply that the Library belonged to the people of North Carolina and that its collections and staff should serve the state. This sense of commitment and responsibility guided his tenure. Under his leadership, the Library achieved a series of notable firsts that extended the reach of its outstanding collections and expertise well beyond Chapel Hill. 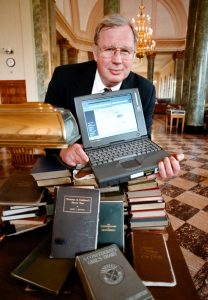 A year into Dr. Hewitt’s directorship, the Library staked out its first homepage on the rapidly coalescing World Wide Web. Shortly thereafter, it launched “Documenting the American South,” a project to digitize frequently requested slave narratives. DocSouth rapidly grew into a pioneering online home for hundreds of full-text books, documents, images and audio files. It continues to attract readers and accolades from North Carolina and from around the world.

Dr. Hewitt sought to use the Library as a springboard for outreach and for great cultural programming that would benefit North Carolinians. He helped to establish a North Carolina Literary Festival that continues today under private guidance, and he initiated a partnership with the UNC Press to publish and distribute books that drew on the Library’s unparalleled collections.

He founded the Carolina Academic Library Associates program in partnership with UNC’s School of Information and Library Science to attract and train the next generation of college and university librarians. Today, the program’s nearly 200 alumni work at libraries across the state and the country.

Under Dr. Hewitt’s leadership, the Library attracted notable gifts and collections, including the papers of journalist and alumnus Charles Kuralt; the André Savine collection, which documents the Russian Diaspora; and materials related to luminaries such as Thomas Wolfe, William Butler Yeats and Gail Godwin. An acquisition of 60,000 recordings put Carolina on the map with one of the largest collections of Southern folk and roots music outside the Library of Congress.

Dr. Hewitt’s tenure saw a full-scale renovation of the R.B. House Undergraduate Library, which reopened in 2002 as a center for student life. When the aftermath of Hurricane Floyd diverted promised state funding, he and the Friends of the Library raised $2 million in private funds to complete the project.

With a deep passion for the mission and potential of libraries, Dr. Hewitt loaned his energy and intellect to organizations that advance their work, including the Triangle Research Libraries Network, the Association of Research Libraries and the International Federation of Library Associations and Institutions. 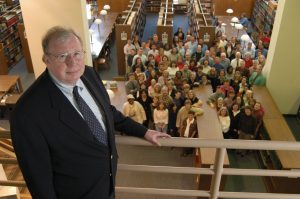 Dr. Hewitt was an elegant and prolific writer about library issues, with dozens of articles and books to his credit, beginning with research into what was then the emerging field of online cataloging and acquisitions. He later turned his attention to special collections, helping the Association of Research Libraries develop a programmatic agenda to advance the visibility and promote the use of rare and unique materials. In retirement, he wrote a detailed history of the Wilson Library at Carolina for the building’s 75th anniversary.

Dr. Joe Hewitt was a wise, kind and trusted mentor to a generation of librarians. They took inspiration from his gentle guidance and scholarly outlook and from his abiding belief in the promise of libraries and the academy.

For his achievements, Dr. Hewitt in 1999 received the University’s Distinguished Alumni Award. Upon his retirement in 2004, Governor Mike Easley bestowed upon him The Order of the Long Leaf Pine for extraordinary service to the state.