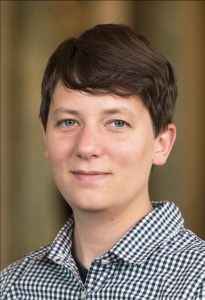 Erica Titkemeyer, project director and audiovisual conservator in the Southern Folklife Collection at the University of North Carolina at Chapel Hill University Libraries, is a 2019 Library Journal Mover & Shaker.

Erica Titkemeyer, project director and audiovisual conservator in the Southern Folklife Collection at the University of North Carolina at Chapel Hill University Libraries, is one of Library Journal’s 50 “Movers & Shakers” for 2019. The award recognizes “top changemakers who are transforming what it means to be a librarian.”

Titkemeyer came to the University Libraries in 2014 as project director and audiovisual conservator for a major grant to investigate workflows for audiovisual preservation and access. The Southern Folklife Collection at the time held more than 50,000 unique audio recordings, 6,500 video recordings and 8 million feet of motion picture film in at least 15 different file formats.

“We knew we had a unique opportunity to address some of the most pressing problems of preservation today. We needed a plan and we needed a project director. Hiring Erica was a stroke of genius,” says Steve Weiss, curator of the Southern Folklife Collection.

“Erica works with departments across the University Libraries like a conductor of a symphony orchestra,” Weiss told Library Journal. “They are gifted at bringing together the full range of stakeholders and divergent skill sets to create a complex integrated work flow.”

Titkemeyer traces their passion for audiovisual conservation to working as an undergraduate on a documentary film about their grandfather’s World War II experiences. Discovering his oral history in a library and hearing his voice “was a really transformative experience” and the kind of moment they hope to help others experience.

“While I’m motivated by the research value of the recordings we work with, it’s patron discoveries similar to my own that encourage me,” they say.

Titkemeyer’s passion for the work has led them to volunteer on audiovisual projects as far away as Montevideo, Uruguay, and Colombia. And their passion has led to significant innovations at Carolina, such as leading the creation of Jitterbug, an open-source audiovisual materials management system.

“Erica is a remarkable colleague and a quiet but sure leader,” says Weiss. “Their deft and sensitive guidance allows everyone who works for and with them to achieve our absolute best.”

Titkemeyer is the University Libraries’ sixth Mover & Shaker. They are featured in the March 4, 2019, issue of Library Journal and on the magazine’s website.

Movers & Shakers will be celebrated at a special reception in June during the American Library Association’s annual conference in Washington, D.C.