This is the first in a series of posts featuring items that will be on display during the Wilson Special Collections Library’s Recent Acquisitions Evening on April 4. Join us then to see these items related to Latin American and Latino Culture & History up close and in person.

Within the last year, the Rare Book Collection has acquired a collection of trade card albums depicting the history and culture of countries across Latin America. Trade cards are colorful, printed cards produced by companies to advertise their products and encourage children to collect them all — like the cards Harry and Ron collect from Chocolate Frogs in Harry Potter. 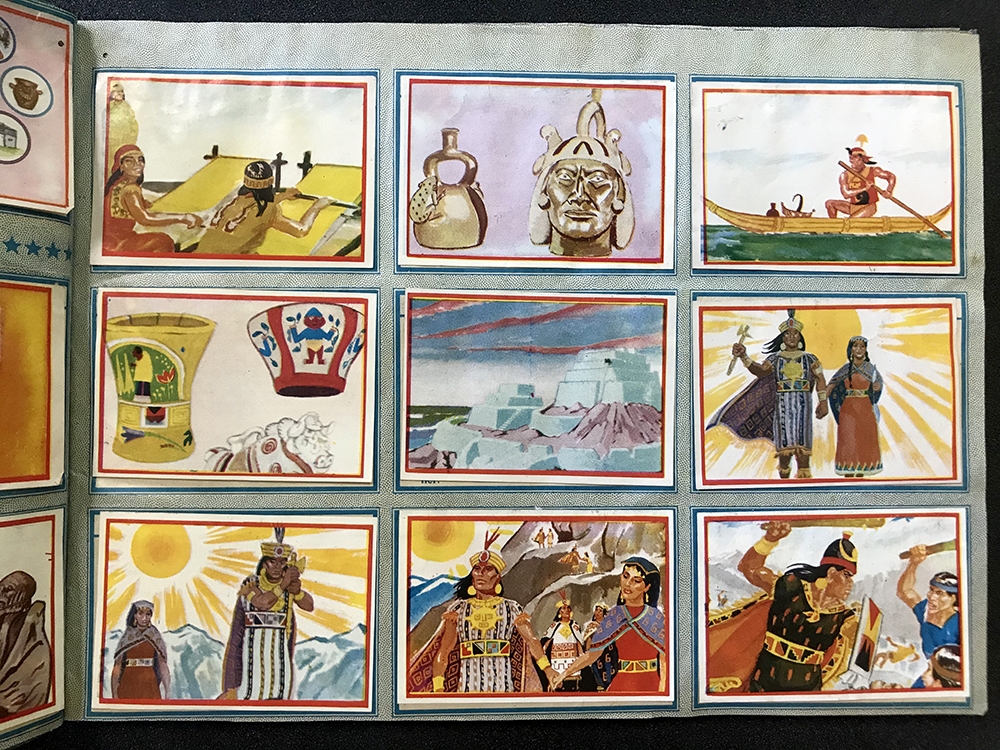 Cards, often illustrated, described important people and historical events. They were given to children when they bought items like chocolates or sweets. The children could then paste the cards into these books and mail them in for a prize whenever the entire book was complete. The cards in the albums in this collection depict important political figures, indigenous peoples, historical images, and more.

Our collection includes 35 unique and completed albums representing an array of different countries across Latin America. The albums serve as a record of how people learned about their own history, and contextualize how history was displayed to schoolchildren across the continent.

Also from the Rare Book Collection, the 1972 book La Odontología en el México Prehispánico by Samuel Fastlicht documents odontological practices of Mesoamerican civilizations, such as the Aztecs and the Maya. In text and images, the book details the advanced dental practices and procedures performed by these civilizations.

This book is a part of the Sheldon Peck Collection on the History of Orthodontics and Dental Medicine. Many of the books in the Peck Collection were previously owned by Samuel Fastlicht, the author of this book.

These more recently created materials highlight our efforts at collecting present-day items. The North Carolina Collection’s mission is to document the state and its people, past and present. One way it does this is by collecting newspapers from around North Carolina. Newspaper stories, sometimes described as the first drafts of history, provide specific details about people, places, and activities in various parts of the state. North Carolina’s Spanish-speaking population has increased over the past few decades, and is now large enough to support a number of Spanish-language newspapers. These titles, La Noticia and Conexión are two examples.