In anticipation of our Recent Acquisitions Evening on April 4, we’re highlighting a number of materials that will be on display. All of the following items related to folk, jazz, and popular music were recently acquired by the Southern Folklife Collection. Join us at the event and see them close up!

Alice Gerrard is best known as a bluegrass and old-time musician and one half of the pioneering group Hazel and Alice with singer-songwriter Hazel Dickens. While living in the Baltimore area in the 1950s and 60s, Gerrard attended and documented concerts at small country music parks in the Mid-Atlantic area that hosted touring bluegrass and country artists. These materials document the network of venues that supported the careers of bluegrass and country music stars, presenting their music to rural communities as well as curious folk musicians and fans from the cities willing to make the drive. They provide a window into the ways in which country music, and particularly bluegrass music, stayed afloat when rock and roll was becoming culturally dominant. 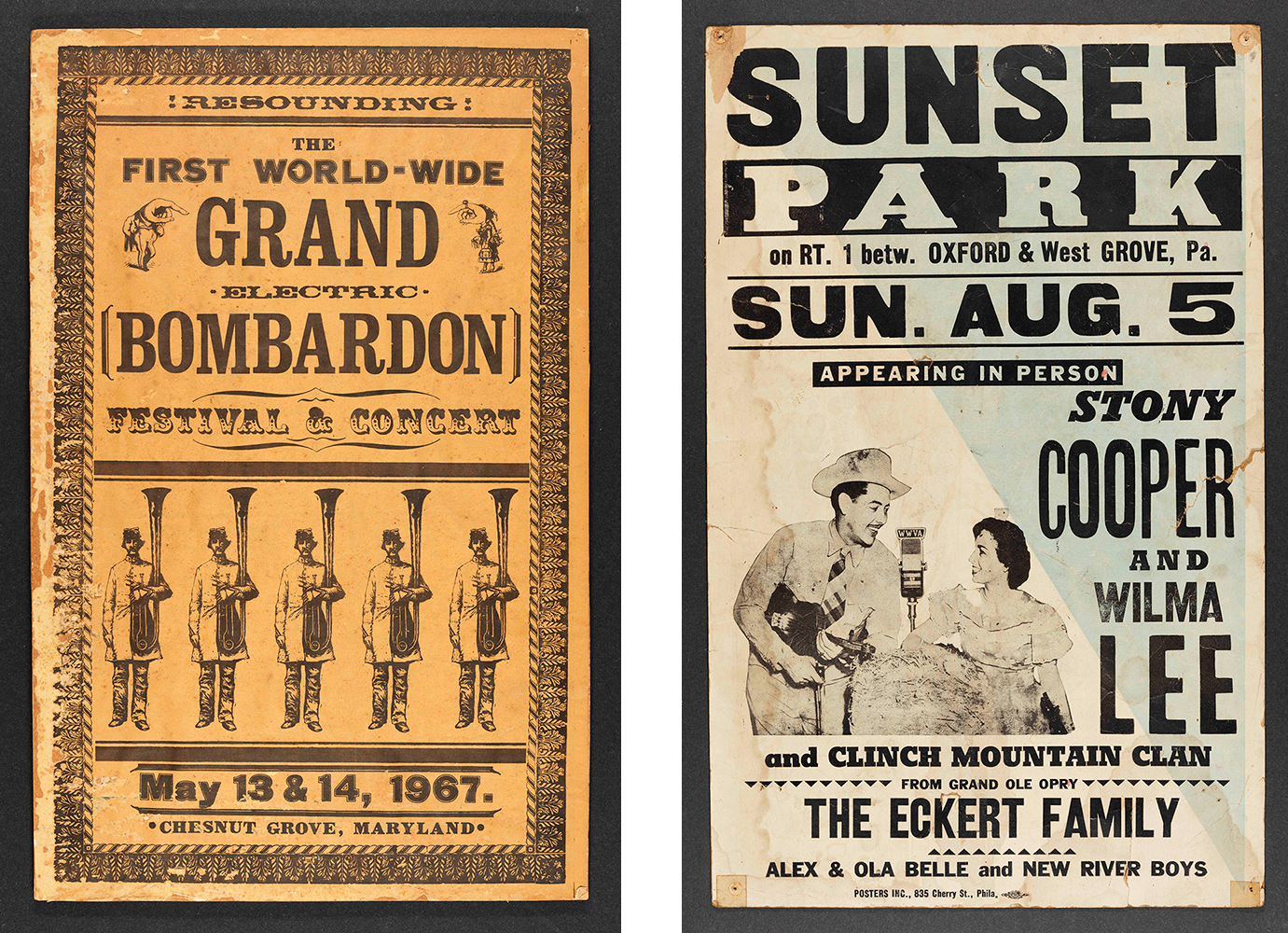 Ken Irwin is one of the founders of Rounder Records, which has played a central role in presenting and promoting commercially recorded American roots music since the 1970s. Irwin signed bluegrass singer and fiddle player Alison Krauss to the label and produced her first album.

Bluegrass is one of America’s unique musical forms, created by mandolinist/singer Bill Monroe, and was for a long time a very male-dominated genre. Breakthrough artists like Alison Krauss opened the door for the many talented musicians who have followed in Krauss’ footsteps, including Nickel Creek and Sierra Hull.

The self-released audiocassette recording in the photo above was made to promote Krauss’ then-unsigned band Union Station and to be sold at the band’s live performances. This, and the other related materials that will be on display at our Recent Acquisitions Evening, provide a rare opportunity to witness a major artist in the early stages of their development — before becoming one of the foremost acts in bluegrass music. 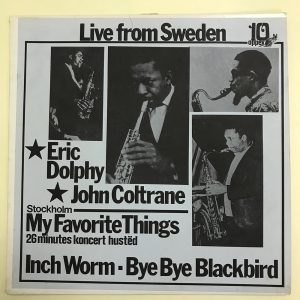 Bootleg records were popular in the pre-YouTube era as unofficial releases issued on vinyl records or CDs of live or studio recordings by popular commercial artists. They served to meet a demand by die-hard music fans and record collectors wanting to hear unavailable performances.

These recordings document rare live performances by legendary North Carolina-born jazz saxophonist/composer John Coltrane. Coltrane died young, leaving an extensive body of published work, but his influence on jazz was so revolutionary and transformative that musicians, music scholars, and fans still seek out unpublished resources 50 years after his death.

This photograph shows one of three records that will be on display at the Recent Acquisitions Evening.

Studio master tapes by the dB’s

Rock musician, record producer, and singer-songwriter Chris Stamey is a UNC-Chapel Hill alumnus who has made his mark on independent rock music locally and nationally since the 1970s. Stamey was a member of the dB’s, one of the foremost power pop bands of the 1980s. These studio master recordings are from the dB’s’ early 1980s releases Stands for Decibels and Repercussions.

The tapes were collected as part of the Southern Folklife Collection’s initiative to document the Triangle’s rock music scene, which has been a wellspring for generations of influential artists (such as Southern Culture on the Skids and Flat Duo Jets) and record labels (Merge Records).

Studio master tape by the dB’s, circa 1981. From the Chris Stamey Collection. Gift from Chris Stamey.

The Voices of Mississippi box set is a trove of traditional music and culture distilling the extensive field work of UNC-Chapel Hill Professor Emeritus William Ferris. It was produced by Ferris with April and Lance Ledbetter and Michael Graves of independent record company Dust-to-Digital, from archival materials from the Southern Folklife Collection’s William R. Ferris Collection. The box set includes new liner notes about the recordings written by noted scholars of Mississippi folklore including David Evans and Tom Rankin. The liner notes earned a second Grammy in the Best Liner Notes category. 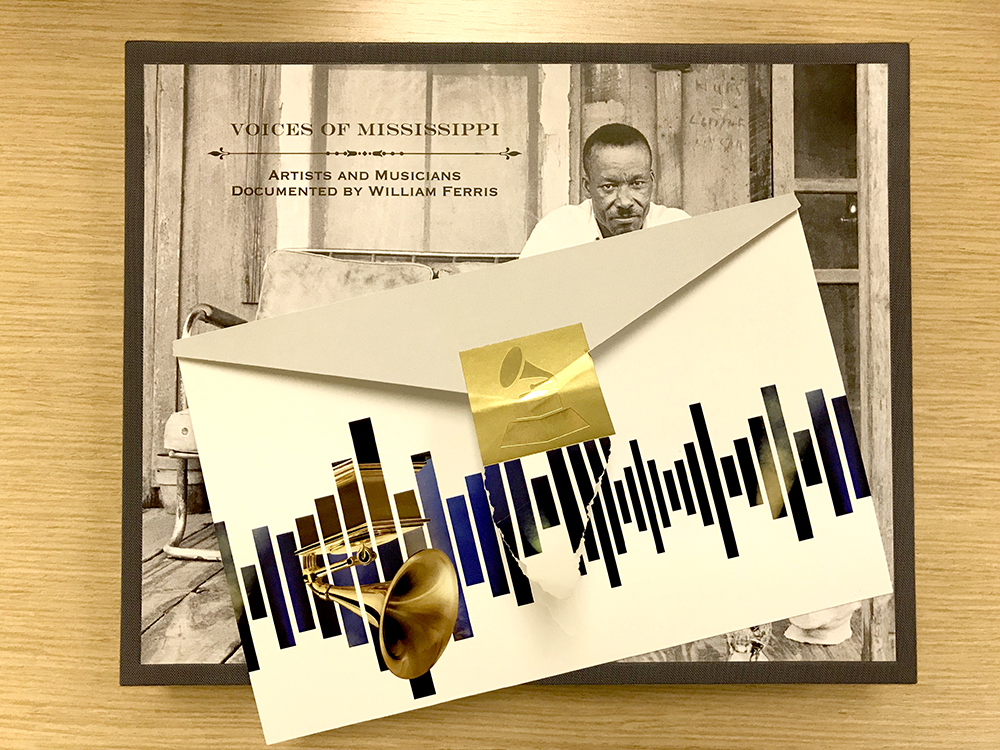 These two items represent a recognition of the lifelong work of Bill Ferris, as well as the importance of Southern roots music and culture in American popular culture.

Sons of the Pioneers discs

Sons of the Pioneers are one of America’s foremost Country and Western groups featuring early members Roy Rogers and singer-songwriter Bob Nolan (author of the classic “Tumbling Tumbleweeds”). These rare lacquer disc studio recordings and transcription discs represent the band’s commercial work in the 1950s.

The Southern Folklife Collection holds the foremost collection of materials relating to the Sons of the Pioneers. The addition of these discs provides a rich historical slice of American popular music in its 1950s heyday.

Mark O’Donnell is a concert taper and trader, having made his first live recording of folk singer-songwriter Joni Mitchell at a concert performance he attended in 1969. His collection consists of thousands of unpublished live and studio recordings on cassette and compact disc. These secret recordings were not sold but kept as a private collection and the content shared within a small community of tapers. Not meant for broad public consumption unpublished recordings like those in the O’Donnell Collection fill in major historical gaps for researchers studying music.

Most of these recordings can’t be found on YouTube. This collection also demonstrates the culture of a grassroots underground community of music fans and collectors. Many of the homemade cassette tapes are decorated with advertisements, reviews, and ticket stubs.