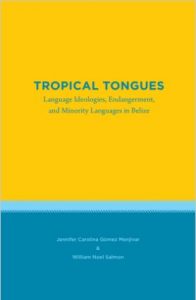 “Tropical Tongues” is the first title in a collaboratively published open access series.

The University of North Carolina Press, the Institute for the Study of the Americas and the University Libraries published the first title in their collaborative open-access series, Studies in Latin America. Tropical Tongues: Language Ideologies, Endangerment, and Minority Languages in Belize by Jennifer Carolina Gómez Menjívar and William Noel Salmon is expected to be followed up by another monograph published this year. The new series will increase the availability of scholarly literature focused on the social sciences in Latin America and the Caribbean. As an open-access series, the books will be made available digitally to a wide audience, particularly for use in classroom settings.

The collaboration was announced in 2015 with a goal of two publications per year and is among the first open-access initiatives UNC Press has undertaken. The Studies in Latin America series publishes short monographs between 20,000 to 35,000-words from senior and junior scholars, covering subjects that include anthropology, geography, history, political science and sociology, with a focus on historical and contemporary Latin American and Caribbean issues.

The Institute for the Study of the Americas selects the works and conducts an internal and external peer review. UNC Press distributes the print edition, and the University Libraries hosts the open-access e-book editions in the Carolina Digital Repository. UNC Press and the University Libraries work together to disseminate information about the books.

Louis A. Pérez Jr., Institute for the Study of the Americas director and J. Carlyle Sitterson Professor of History at UNC-Chapel Hill, believes it is important to provide a large platform for a growing body of scholarly work in Latin American social sciences.

“This series and our collaboration with UNC Press and the University Libraries works to meet the needs of an expanding area of scholarship by providing a platform for high-level, peer reviewed research and literature on social science issues important to Latin America and the Caribbean,” said Pérez. “These open-access monographs provide a new and incredibly accessible resource for the dissemination of original research to a massive audience.”

The Studies in Latin America series was funded in part by a grant from the UNC College of Arts and Sciences.