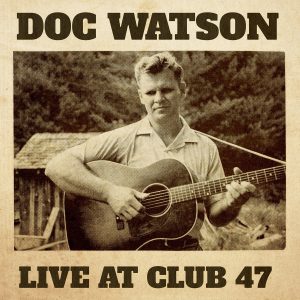 A rare archival recording of Doc Watson is now available for purchase, thanks to a collaboration between the University Libraries and Yep Roc Records. Doc Watson, Live at Club 47 has been newly released on CD and digital.

This never-before-heard album is part of the Southern Folklife Collection at the Wilson Special Collections Library. It was recorded live on February 10, 1963, at Club 47 (now Club Passim) in Cambridge, Massachusetts.

“This recording documents a pivotal moment in virtuoso Doc Watson’s early solo career,” said Steven Weiss, director of the Southern Folklife Collection. “This is Doc, paying his dues and playing his heart out, performing two sets of classic, old-time country songs he learned as a child from his family and from old 78 RPM records.”