Skip navigation
Here’s what to know about campus libraries for summer 2021.
Home › News › Retyping a Classic at Wilson Library

Retyping a Classic at Wilson Library 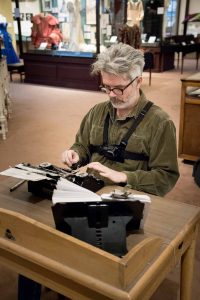 Nearly a half-century ago, Daphne Athas typed Entering Ephesus, her semi-autobiographical novel of life in Chapel Hill during the 1930s. This week, artist Tim Youd has been at UNC’s Wilson Library and Ackland Art Museum, retyping the entirety of Athas’s 1971 work.

Youd’s appearance on campus is part of his “100 Novels” project, in which he retypes works of literature in settings related to each novel.

“As I have come to understand the project, it is at its heart an effort to be a truly good reader every time I sit down, and to become a better reader as I continue to move through the entire 100-novel cycle,” he told the The Herald-Sun.

On a recent afternoon, Youd took some time to reflect about this chapter in his 10-year project.

About Entering Ephesus: “It’s a hidden gem. She’s gotten to the heart of a moral dilemma: What it was to be a no-longer-wealthy and quite eccentric family, expelled from Massachusetts and forced to move to Chapel Hill during the Depression. [Athas] confronts head-on racial and class attitudes—what it means to be supposedly “enlightened” northerners, yet with their own deep-seated prejudices. It’s unflinching.”

About the typewriter (he purchased it online): “It’s the same make and model that Daphne used, an Underwood Universal, made in the 1930s. This is my 53rd novel, for which I’ve used somewhere near 35 distinct typewriters. I also used this one to type Jack Kerouac’s Big Sur and Faulkner’s The Sound and the Fury. I actually have two of every typewriter. There is another one of these back in my hotel room.”

About another famous Tar Heel novelist: “Thomas Wolfe didn’t type! He had a typewriter, but used it for letters and such, not for his novels.” 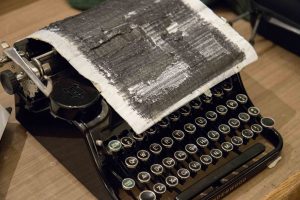 Tim Youd retypes an entire novel on a single sheet of paper for his “100 Novels” project. The typewriter is the same model that Daphne Athas used when writing “Entering Ephesus.”

About retyping in Wilson Library: “This used to be the main library. In the novel, the main character works in the library typing cards for the card catalogue. From what I understand, Daphne used many details from her own life in writing the story, and the main character was in part a fictionalized version of her. So perhaps Daphne herself worked as a student typing cards for the card catalogue. Maybe I’m sitting where she sat.”

About finishing—or not (he typed for several days in Greensboro, then 10 days in Chapel Hill, and will likely need 5 more to finish in Los Angeles): “I significantly underestimated the time I’d need to do the retyping, which hasn’t happened before. Now I can see my mistake. The novel was reissued by a smaller press in New York and they loaded each page with lots of words. 440 pages is more like 650 in a more regularly spaced novel. So I won’t finish the performance onsite, as I already own a plane ticket for Monday. I’ll just type the last few days in my studio [in] LA, and pretend I’m still in Wilson.”

About “100 Novels”: “Each project is a gift, an opportunity to really closely read the novel. Everything I type, I’ve read before. I’m trying to be anything but a passive reader. I’ve become an aggressive annotater, and read as critically as I can. I feel very fortunate that my artistic path has led me here. I don’t want to squander that.”