Skip navigation
Here’s what to know about campus libraries for summer 2021.
Home › Featured › Setting the Stage at PlayMakers Repertory Company: 40+ Years of Magic

Setting the Stage at PlayMakers Repertory Company: 40+ Years of Magic 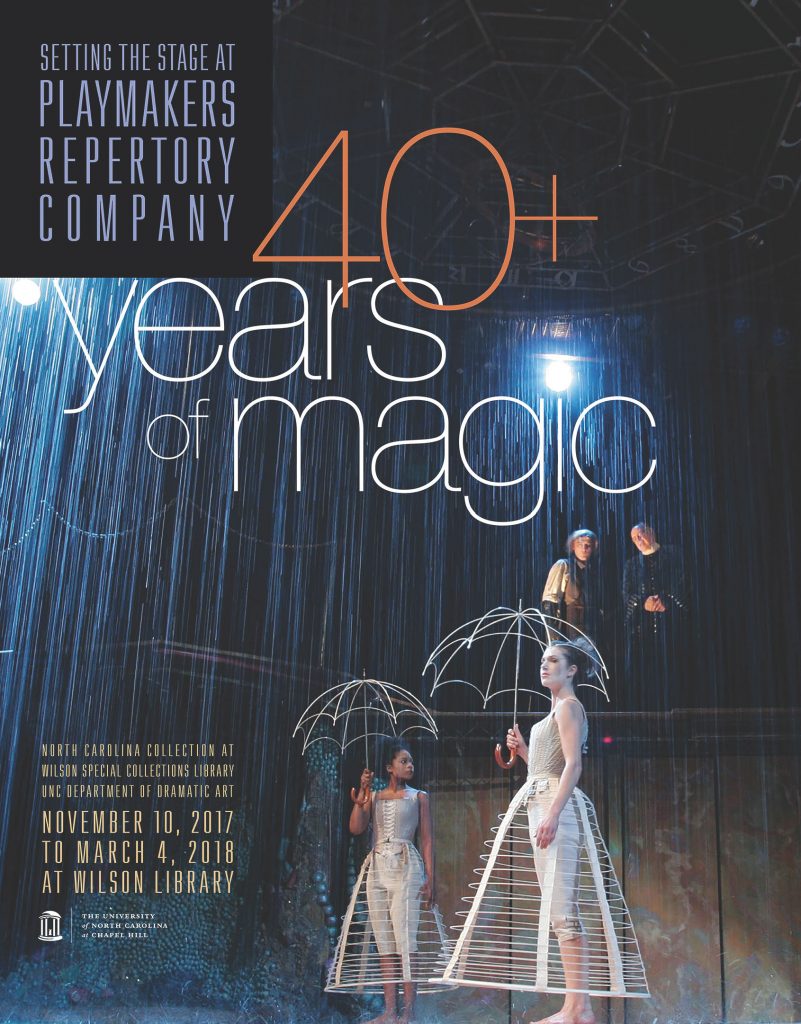 For more than forty years, PlayMakers Repertory Company has brought world-class theater to Chapel Hill, transporting audiences back in time, around the world, and to the limits of the imagination.

Now a UNC Library exhibition allows viewers to peer behind the scenes and learn about the technical craft that makes each performance possible.

Setting the Stage at PlayMakers Repertory Company: 40+ Years of Magic features 16 different costumes and costume pieces, plus props, set models, sketches, photographs, playbills, and programs. It will be on view in the North Carolina Collection Gallery at Wilson Library through March 4, 2018.

Captions reveal surprising facts about the items on view. The ghost of Hamlet’s father, for example, wore a helmet that was constructed over a Vietnam-era Army helmet. The baked goods in 2017’s hit The Cake were made largely of Styrofoam and plaster of Paris. And one costume from Into the Woods is exceptionally large because the actor who wore it played two roles and had to slip it on and off quickly.

“We want people to enjoy and appreciate the illusion and what goes into it,” said Bobbi Owen, resident costume designer for PlayMakers Repertory Company.

She and the company’s two resident costume and scene designers, Jan Chambers and McKay Coble, collaborated with Wilson Special Collections Library staff to develop and prepare the exhibition.

“Costumes and scenery are not usually seen close-up so they may look different than when they are on stage under lights carefully focused on them,” said Owen. “The ‘magic of the theater’ can sometimes even make terrycloth look like velvet!”

Owen noted that PlayMakers Repertory Company has many loyal fans who come back year after year. This exhibition is sure to evoke memories—all the way from a costume sketch for the company’s very first production, The Crucible, in 1977, right up to a bonnet from 2017’s Sense and Sensibility.

Most of the items on display belong to PlayMakers Repertory Company and were loaned for the exhibition. Materials drawn from Wilson Library collections complement these items.