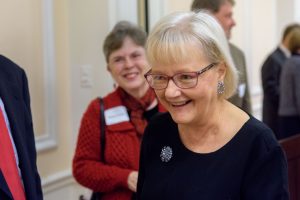 As Sarah Michalak, University librarian and associate provost for University Libraries, prepares to retire at the end of December, she leaves a profession transformed and a library poised for continued success in an environment of rapid change.

When Michalak began her career in 1970, card catalogs were the norm and computers were a rarity.  One of the first libraries she led was the forest resources library at the University of Washington. “In order to search a key national database,” she recalls, “we had to go to Radio Shack to buy a computer to use.”

That is a far cry from today, when UNC’s library is at the leading edge of the digital revolution. Under her leadership, the Library has created the Research Hub and makerspace that enable cutting-edge research and promote interdisciplinary collaboration. Core library collections have grown and been digitized. Today, nearly 20 percent of the 8 million volumes in UNC’s libraries are electronic. And the North Carolina Digital Heritage Center works with more than 200 local partners to preserve and share the state’s heritage online.

These developments reflect a focused effort to build technology capacity and expertise. When Michalak arrived at UNC in 2004, she recalls, the University was just starting to support campus use of emerging technologies, build a more robust network, and help students adapt to new laptop requirements. “The librarians and I agreed that building our technology was our top priority,” she says. Since then, she has led a team that has modernized operations and expanded services, even when budgets have been constrained. 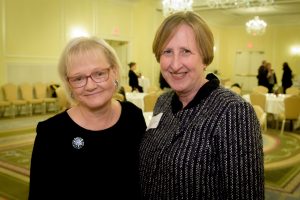 Carol Hunter, deputy University librarian (and interim University librarian beginning January 1), says that Michalak’s guidance has had a tremendous impact on the success of the libraries.  “Sarah’s leadership has steadied the ship as we navigated rough budget waters,” says Hunter. “She has ensured that we continued experimentation, innovation, and growth during a challenging period.”

Michalak led significant reorganizations so that talented and creative staff could provide the partnerships that help students and staff flourish at Carolina. “Sarah is very student and faculty focused,” says Hunter. “She is creative in thinking about how to maximize the success of those we serve.”

Laurie Langbauer, professor of English and comparative literature, agrees.  Langbauer, who as a member of the Administrative Board of the Library has worked closely with Michalak, says, “Sarah looks at the way that things have been done for 300 years, and finds new ways to do them.”

One program that Michalak has helped to strengthen is the Triangle Research Libraries Network (TRLN). The consortium comprised of UNC, Duke, North Carolina State University, and North Carolina Central University, was founded in the 1930s as a way to divide book-purchasing responsibilities.  “Today, the universities share our collections and librarians’ expertise and work on projects together,” says Michalak.  “Faculty and students have ready access to these combined collections in a very easy way that makes for an extremely rich information resource in our area.”

Michalak is dedicated not only to the students and faculty on campus but to her library colleagues.  “It’s just a thrill to work with the librarians and library staff who do this work,” she says. “If I as an administrator have enabled their work and made it easier, that’s completely satisfying and makes me very happy.”

One priority for Michalak has been to improve compensation for librarians and library staff. When Michalak joined UNC, salaries were low compared to local and national peers. She has worked with the University to address salaries and recalls one staff member who wrote to thank her: “The note said, ‘Because of the raise you helped me get, I was able to quit my second job.’ That’s a way that I have been successful in helping librarians fulfill their mission.”

While Michalak is humble about her accomplishments, her colleagues are happy to sing her praises.  “Sarah Michalak is the embodiment of service offered by university libraries,” says Langbauer. “Libraries are humble, stalwart, generous, kind, and always available, just as Sarah is.  She is a living icon of the way that libraries serve the public and the greater good.” 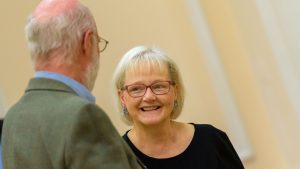 Serving the greater good through librarianship is a belief that Michalak holds dear. “Those who are fortunate to serve in public universities know that we are part of a system in the U.S. that starts with public kindergarten and goes all the way through the Ph.D.,” she says.  “The education that public colleges and universities offer is vital for the welfare of our society.  Our libraries, which are accessible to anyone in the community, offer free access so that people can learn and explore and become well-informed citizens.”

As Michalak looks to the future of libraries, she says, “We don’t know what the next generation of information technology will bring but there will be huge opportunities for librarians to adapt all sorts of new technologies to serve the needs of faculty and students.”

At the same time, Michalak is thrilled that there’s always the opportunity to familiarize new generations with resources that have nothing to do with technology. “We introduce students to the first editions we have of all of the great romantic poets, such as Wordsworth, Shelley, and Keats,” she says.  “Sharing these wonderful works with a new generation and helping them experience the original text is joyful. It will be a long time before original primary resources and the power that they have will become irrelevant in higher education.”

The UNC libraries will continue to hold a special place in Michalak’s heart and mind and she hopes that is true for all of those in the UNC family. “When you have a top 20 library, you have to cherish and support it,” she says.  “No entity can afford to recreate what this university has in terms of its library, so we need to value it.”

After spending a career working in public university libraries, Michalak has found that Carolina’s relationship to its libraries is unique.  “At other (universities), people admire, support, and heavily utilize the libraries,” she says. “There is an added little piece of love here (at UNC).”

She says that love for the libraries is partly because the Library “so beautifully symbolizes for people their Carolina education. When you go back to the original vision for this university—that it would educate and train citizens of this state and send them back to every county to be the mayor, the town lawyer, and the city councilman and that it would elevate the life of citizens through education—you can see that it has worked.”

“People throughout this state have Carolina educations and make a difference in the lives of their communities,” says Michalak. “The Library has come in part to represent that experience and the grand times they had here; that’s part of the culture of this place. It’s my privilege to have been a part of that.” 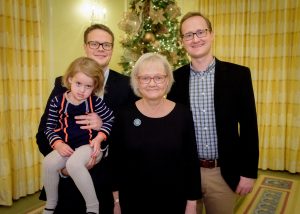