In a corner of UNC’s Wilson Special Collections Library sits a large metal contraption that looks a little like a mid-century time-machine. In fact, the Hinman Collator does take users back in time, helping them to compare texts printed long ago and draw new insights about them.

Typographic errors, reset type, and damage to fonts from one edition to the next all hold keys to the history of a literary work and the vision of its author, said Elizabeth Ott, interim curator of rare books at UNC. But such minute differences can be difficult to spot merely by placing two books side-by-side and comparing them—a painstaking process known as collation.

Scholar Charlton Hinman invented the collator in the late 1940s in order to speed this process and increase accuracy. About 57 to 59 collators were produced during that time.

To operate the Hinman Collator, a user places two copies of the same text under holders on opposite sides of the machine. The user then manually adjusts the holders until a system of mirrors causes the two items to align in the collator’s eyepiece.

At this point, the user activates oscillating lights, which illuminate first one page, then the other. The two pages toggle rapidly in view through the collator’s scope. As the view changes from one text back to the other, small differences such as changed words or corrections to the text appear to “blink” at the viewer.

“In many ways, the Hinman Collator is a symbol of the optimism of American literary scholarship in the mid-twentieth century,” said Ott. “Textual scholars hoped to use technology to aid in answering concrete questions about authors and their works.” 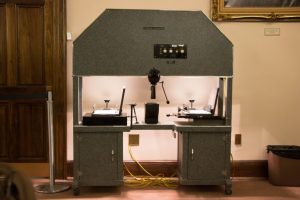 In fact, UNC’s Hinman Collator was a purchase by the English department in 1966 or 1967 in order to help produce the complete edited works of the nineteenth-century American writer Washington Irving.

The collator is still relevant today, said Ott, as scholars in the digital humanities have revived an interest in using technological approaches to literary study. The Hinman assists researchers in pinpointing exactly how two texts differ. Computer analysis of digitized books has been fruitful, said Ott, but has yet to replace optical collation.

In 1986 the collator was transferred to the Rare Book Collection. After a recent repair, it is now available for use in the Special Collections Research Room on the second floor of Wilson Library.

All Wilson Library patrons are permitted to use the collator in their research. It is also available for demonstrations for instructors, faculty, and staff.

To arrange for use of the Hinman Collator, contact the Wilson Library staff at wilsonlibrary@unc.edu or (919) 962-3765.

Story by Jane Violette. Video and photo by Aleah Howell.